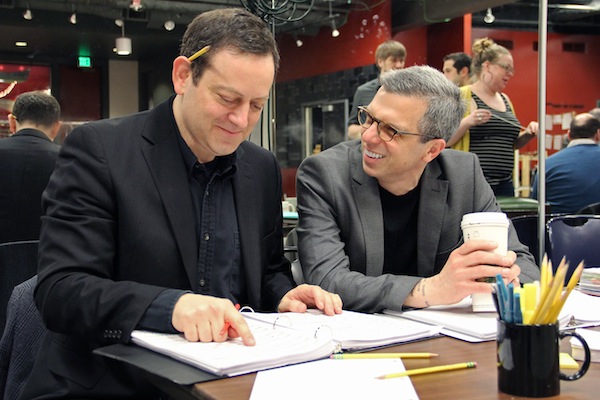 It was just a little over a century ago that E.M. Forster published A Room with a View, neatly bookmarking the end of the strictly organized Edwardian era he so memorably satirizes. But amid its social critique, the novel traces a journey of romantic discovery. This is the journey undertaken by the heroine, Lucy Honeychurch, as the promise of love prompts her to challenge the code of conventional behavior she has been brought up to obey.

The success of the 1985 film A Room with a View, produced with characteristic opulence by the Merchant-Ivory team, won a new generation of fans over to Forster’s elegant fiction. After all, Lucy’s awakening begins during an actual journey, and the stunning Italian and English landscapes of the novel’s setting lend themselves naturally to cinematography.

But writer Marc Acito and composer-lyricist Jeffrey Stock decided that Forster’s vision is also ideally suited to the medium of musical comedy, and their hunch quickly attracted the interest of theaters devoted to nurturing new works. Following initial incubation at the Musical Theatre Lab at Running Deer Ranch (located at the base of Mt. Adams), Acito and Stock were invited by San Diego’s Old Globe Theatre to audition what they’d come up with. Nine months later, A Room with a View received its world premiere there in March 2012.

That’s an absurdly accelerated time span for the complicated fusion of arts that defines a musical. David Armstrong, 5th Avenue Theatre’s executive producer and artistic director, saw deeper potential in Room, and the show’s creators were eager for an opportunity to revise the work, starting with a private three-week workshop at the 5th last December. Their newly revamped musical, now in previews, opens on April 30 with a locally-sourced cast including Laura Griffith as Lucy, Louis Hobson as George, the man she loves, and Patti Cohenour as the uptight spinster chaperone Charlotte (played by Maggie Smith in the film). David Armstrong directs this new production.

Acito and Stock have been friends for almost a quarter-century, but A Room with a View marks their first realized collaboration. While taking a break from previews, they talked about their kinship with Forster, how his novel inspired them, and the unique insights that the musical medium allows.

What about A Room with a View made it such an appealing subject to be translated into musical comedy?
Acito: It’s so funny and romantic and yet so human and emotional. A romantic comedy of manners doesn’t always necessitate a depth of emotion that sings. But Forster has a depth to him that really invites characters to introspect. The piece is deliciously funny and at the same time wonderfully romantic.

Stock: And there’s so much potential for music as a character in itself. A culture clash between the British and the Italians is inherent in the story, and from that I can already begin to hear music as a way of telling it. And you also have a clash between the 19th and the 20th centuries, when this burgeoning modern world comes knocking on the door. Music is a useful way to tell part of that story. So for example we created a recurring role for two Italian characters — the driver of the carriage and his girlfriend—who are really developed in a symbolic way in the book. They sing in an operatic way—Italian, passionate, full-throated—that is starkly contrasted with the more clipped and stiff-upper-lip British characters. In general the score had a varied palette, with a lush, 17-piece orchestra. There are the opera references mingled with ragtime and operetta and even some elements of modern pop.

Acito: I would describe it very much as a hybrid work. As a composer, Jeffrey firmly has one foot in each camp, the Broadway musical and the classical world. He really marries these two styles in the piece. In fact one reason I brought it to him is because Room is set in 1908, which was such a pivotal year for the development of modernism, on the cusp of the modern era. I thought it spoke to a sweet spot that suits Jeffrey musically.

Did you find yourselves more drawn to the novel or the film as a source?
Stock: I haven’t seen the movie for 20 years and kept away from seeing it again on purpose, since I didn’t want to be reminded of the answers they came up with. The novel is so beautifully wrought and the characters are so vivid there that I could really feel what made them distinctive.

Acito: In terms of the syntax of the piece, I was lucky in that Room is my favorite novel of all time. To translate this Edwardian language to the stage, I actually have the characters speak some of the lines in Forster, and there’s some faux-Forster—Faux-ster! This is a comedy, so we want to make sure the tone really sparkles. I found myself thinking of what George Bernard Shaw would write, or occasionally Oscar Wilde, and also Alan Jay Lerner, who of course adapted Shaw for My Fair Lady.

But it also seemed natural to translate Room to a modern mentality since I feel a real kinship with Forster: partly because I’m a novelist myself but partly because Forster was the mentor to Christopher Isherwood and to Armistead Maupin, who was a mentor to me as well. I feel this intergenerational connection of gay writers and a certain sensibility that seems to cut across a hundred years.

However musty the Edwardian era may seem, Downton Abbey proves there’s on ongoing fascination with that past. But A Room with a View transcends being a period piece if you think about Lucy as an alter ego for the young Forster himself, for his own desire.
Acito: Absolutely. In fact the story would make a lot more sense if the character were named Lucas instead of Lucy—if we imagined Lucas engaged to someone named Cecily rather than Cecil but falling in love with George. That answers a lot more questions, and it’s one of the things we had to unpack to figure out how to bring the story onstage. This is the internal voice of the character that you get in the novel or that you get from close-ups in a film; on the stage you have to see it from 50 feet away, so the actions of the characters have to be understood from a different perspective. We’ve taken liberties with the story that we feel capture the spirit of Forster but that diverge from the actual plot line.

The fact that Room was made into such a successful film is great for stirring up interest in a new musical, but the other side of the coin is that people might be too familiar with that version of the story. What kinds of new insights can they expect from experiencing it in the context of a musical?
Acito: Here’s a clear example for you: In the book we read about Lucy’s love of Beethoven. Forster writes that his music lifts her to an “empyrean” realm. And in the film you see Helena Bonham Carter [as Lucy] playing Beethoven in quite a feverish way at the piano. You hear Beethoven and you see her response. For the musical Jeffrey crafted a song called “Ludwig and I” exploring what it’s like for Lucy to be inside music.

Stock: It’s a very personal song for me, too. When I was young I played piano, and music was a private thing where I got to process my own feelings. So I thought of this song as a great way to show what’s inside Lucy’s mind when she’s playing and her inner Goth girl comes out. It would be considered inappropriate for a young lady to play such passionate, stormy music instead of something dainty and polite. I started with the third movement of Beethoven’s Tempest Sonata, and it becomes a sort of concerto form between the orchestra and the piano doing these fireworks over it. In most musicals you might have a song about her ambition, but she can’t really sing about that here. Music and Beethoven become Lucy’s secret, invisible friend. All these things within her are roiling and waiting to come out, to open her heart.

Acito: Our directive to David [Armstrong] for this new staging was to be non-literal but elegiac and impressionist. Merchant and Ivory actually went to Florence to make their film; obviously we can’t put that realism on the stage. We decided we want something that captures [the setting] in an abstract, fragmented way. The set design shows photographic prints of naked statues totally out of scale, so that we only see pieces of them.

Our musical is not a substitute for the original; it’s an addition that should give audiences new insight into the work because there are dimensions to the characters that can only be understood through music. For us this is like getting to know old friends in a new way.

A Room with a View plays through May 11 at the 5th Avenue Theatre. Photo of Jeffrey Stock (l) and Marc Acito (r) by Jeff Carpenter.