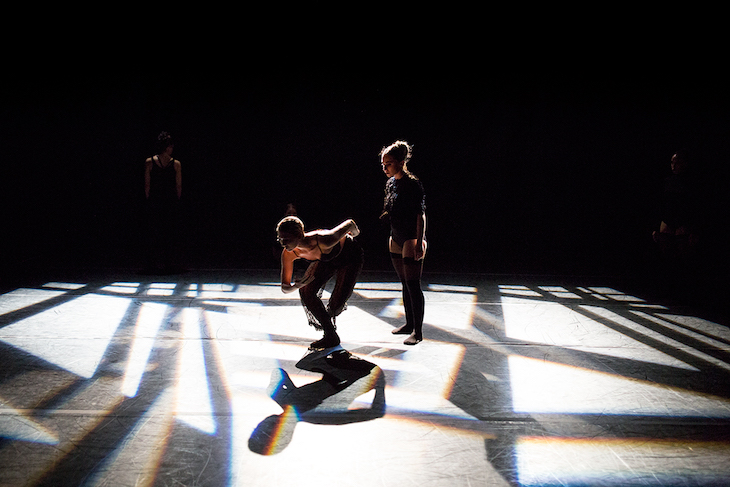 Sidra Bell's 'Beyond the Edge of the Frame.' Photo by Tim Summers.

Last year Kate Wallich expanded her growing dance empire, now called Studio Kate Wallich, and created YC2 in partnership with Velocity Dance Center. YC2 is an offshoot of Wallich and Lavinia Vago’s performance company, The YC, and much like Ailey II is to Alvin Ailey American Dance Theatre or Taylor 2 is to Paul Taylor Dance Company, YC2 is able to accomplish initiatives that the main company is not. In this instance, that initiative is to give talented dancers fresh from college a platform for paid training and performance. Don’t be put off by the “2” however, because New Dances II, presented by Velocity last weekend, proved that the dancing of YC2 is anything but second-rate.

The first of the program’s three works was choreographed by Tom Weinberger, a member of the YC and former dancer with Batsheva Dance Company, where the supple Gaga style of movement originated. Weinberger’s Gaga influence lends a soft, articulated specificity to his work, Dismantled.Harmonies. Dressed in pale beige sportswear, the six dancers swirl, crumble and rise in a tight group; their overlapping pathways narrowly avoid collision as a slow rendition of Bach’s Jesu, Joy of Man’s Desiring unfolds in heavy, spacious piano notes. Over time, it becomes apparent that each dancer is repeating the same short series of movements, and the effect is a kaleidoscopic landscape of bodies in perpetual motion, occasionally pausing to reassemble in different parts of the stage. Despite the extended repetition, cycling for 15 minutes or more, the movement never presents exactly the same way twice. Each new angle reveals a new detail, the shifting spatial relationships showing different dancers’ movements side by side. Suddenly, from within this wash of seemingly unrelated movements, there’s an alignment of action. Though continuing to repeat their same phrases, the dancers fall together, reach together and gesture with similar intention, revealing that each of their distinct patterns is a varying interpretation of the same tasks. The aligned timing lasts just a few seconds before the piece ends, delivering a fleeting moment of transcendence.

Wallich’s new work, A Drama, similarly features the six dancers independently moving in seeming obliviousness to one another but synced through stylistic coordination. Blaring trumpets match the intensity of the initial unison dancing, with presentational skyward gestures, precise drops to the knees and chopping actions of the arms, like the dancers are conducting a supernatural orchestra. The commanding movements are punctuated with tiny hiccups—a tripping of feet or flickering shift of focus, each executed with laser precision—until eventually the dancers break unison and each performer gets lost in their own isolated journey. Sinuous and regal physicality intersperses with detailed, idiosyncratic movement, and the dancers trace the air with their hands like each is on the verge of a mental break.

Replete with surging violins and timpani, the cinematic music by local composer Luke Bergman adds to the sense that we’re watching some medieval or Tudor apologue. The costumes’ billowing skirts and jewel-toned knickers seem a subtle nod to an era of formality and hierarchically defined roles, but despite these suggestions of narrative and character, the choreography never fully embraces the development of a story. A Drama remains a design-forward work that borrows the aesthetic of narrative.

Beyond the Edge of the Frame, a sizzling work by acclaimed New York choreographer Sidra Bell, leaves the audience gasping. More presentational than the first two pieces, the dancers perform to the audience with pointed focus and explosive energy. Set to driving industrial beats, the dancers’ movements have a harsh sensuality—hips thrust out and legs smacking the air, cabaret poses bridged by lightning-fast transitions. Complicating the splayed, dominatrix aesthetic are moments of frenzied impulse, fawn-like bounding or ecstatic spinning to the ground. Powerhouse dancer Dominica Greene stands out for her sharp muscularity and ironclad detail work. The piece concludes with a high-octane solo where she tears across the stage like a femme Terminator, an unstoppable force of razor-sharp ballet moves.

Wallich is known for her uncompromising rigor and that certainly extends to YC2, whose six dancers (Alex Quetell, Carlin Kramer, Emma Lawes, Emma Wheeler, Laura Carella and Greene) perform with world-class technique and precision, even inside a swirling, nuanced vocabulary that could easily read as amorphous if not rehearsed with exacting standards. While these three works stayed true to the serious and aesthetic-driven values of Studio Kate Wallich, the pieces in New Dances II felt like a departure from the abstract, more experimental work they’ve put out in the last few years, placing greater emphasis on formalism, structure and predominance of the recognizable dance phrase.