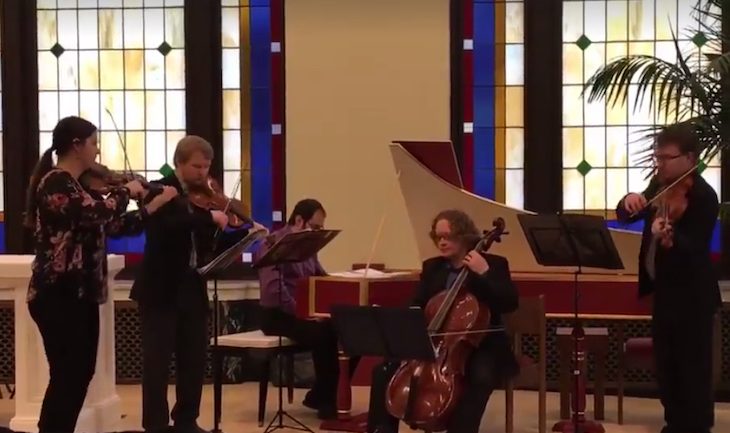 Sanctuary in the City

A new series of downtown lunchtime performances made its debut last month. The “Sanctuary in the City” concerts take place on the first Wednesday of each month, from 12:10–12:50 p.m.—just enough time for people to get there from work and back after. The concert venue is unusual but perfect: the Josephinum on the northwest corner of 2nd Avenue and Stewart Street.

The Josephinum, which is now run by Catholic Housing Services to house low-income and formerly homeless people, began life a century ago as the luxury New Washington Hotel. In 2010, following a renovation led by Stephen Lee, the architect who did much of the renovation of St. James Cathedral, the hotel’s lush dining room, complete with stained-glass windows and coffered ceiling, was officially dedicated as Christ Our Hope Catholic Church. The beautiful, light-filled space holds chairs and pews to seat about 280.

Several years ago, having retired from 32 years as music director at St. James Cathedral, James Savage found himself at loose ends. Along with Pastor Paul Magnano at Christ Our Hope, he inaugurated what has become a lively choir, made up equal parts Amazon millennials and building residents.

Realizing how fine the music sounded in the church, Savage invited Stephen Stubbs of Pacific MusicWorks and Henry Lebedinsky of Pacific MusicWorks Underground “to come see this miraculous place and experience its acoustics,” Savage says. “I told them that the location is right at the convergence of Belltown millennials and retirees, the homeless and recently homeless, Amazon, the tourist attraction of the Market and the downtown visitors and employees.” Stubbs and Lebedinsky came up with a proposal for lunchtime concerts, and Savage ran the idea by Pastor Magnano and the church’s Outreach Minister; they were enthusiastic.

The whole idea fit in with Lebedinsky’s efforts at Pacific MusicWorks Underground to present informal concerts designed to attract new audiences. He and Savage planned an initial series of six concerts, with Savage and the church doing publicity and Lebedinsky planning programming and musical logistics. The parish provides the space free on behalf of the Archdiocese.

The first concert, performed in early November for an audience included many residents of the Josephinum or other downtown housing, was highly successful. Those who came to hear the music of the Bach family played by Lebedinsky and four professional, period string players, left with a sense that it really had felt like a sanctuary in the midst of a busy day though, alas, people can’t take lunch into the church. A basket was placed at the entrance for donations because, though these concerts are free, the musicians are paid.

“This music does what it is designed to do: it gets people into the joy of what Christmas is all about,” Lebedinsky says. “The music is so much fun!  Toe-tapping, danceable, very approachable and satisfying.”

Lebedinsky himself will be at the harpsichord, along with two violinists, a Spanish harpist and Stubbs on baroque guitar, all of them regular performers with PMW. Joining them will be soprano Danielle Sampson, who, Lebedinsky says, “has not just a beautiful voice, but incredible ability to convey emotion through her voice and the music.”