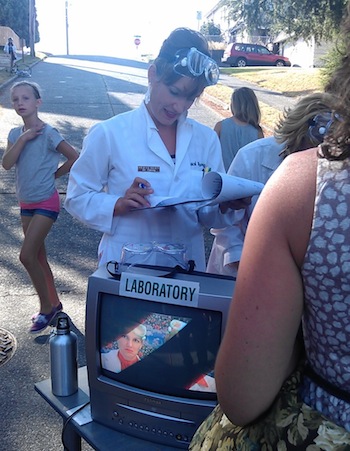 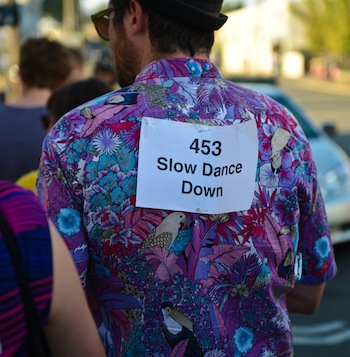 Opening the second annual NEPO 5K Don’t Run art walk, the Vis-à-vis Society reprised their registration booth by posing the question: “How will you go down?” A sampling of numbered verbs—to be chosen and worn by non-racers—includes Avalanche, Beam Down from Space, Boogaloo Down, Burn Down to Embers, Coax Kitten Down from Tree, Dance Down, Damn it All to Hell. (Photo at left by Miguel Edwards.) After a photo op acting out their verbs, participants were moved through the starting line in increments by emcee Jake Stratton. Reversing course from last year’s art walk, which ended at NEPO House in Beacon Hill, the action flowed from within and around the house to the International District in a thoughtfully paced way. 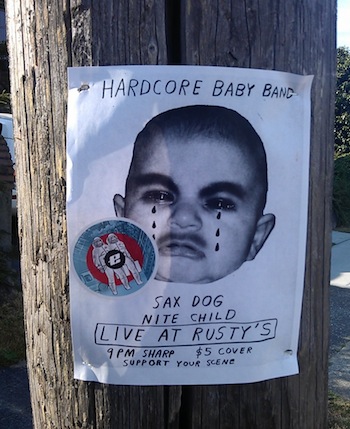 The first leg of NEPO scattered installations and experiences down 18th Ave. S., creating a corridor of makeshift galleries from darkened garages, overgrown yards and light poles. A flyer on one of them showed a mustachioed child crying alligator tears, as an ad for a show by Hardcore Baby Band at a venue called Rusty’s. (Photo at left by Rachel Shimp.) A bit further down the route, a photo of the Earth titled “We’re Never Getting out of This Place” offered free community therapy and donuts as consolation. Nathaniel Russell’s fictional advertisements rival classic memes like “Safety Not Guaranteed” and “Loss Cat,” his “Lost flyer” and “found dog” riffs lightening the mood in between some rather spooky art pieces.

Chief among those was Brandon Aleson’s and Leanne Grimes’ “Tongue Tied.” A sign fully disclosing its gruesome components did not deter anyone from winding up a steep front yard to pop into a shrouded area humming with ominous vocal tones. The Lynchian object: A mound of beef tartare, infused with rose essence and “urine from a doe in heat,” on a pedestal, wafted out through a diffuser. In the dark. A nightmare snapshot to sear into the cerebral cortex, catalogued between Fast Food Nation and the recent disembodied heads on True Blood. I’d like to know if anyone who viewed it barfed on the carport. On the same stretch of road, poet Sarah Galvin’s performance involved first being heckled by a pretentious detractor and then being dragged into a 6-foot-deep hole in the ground by a screaming maniac. Directly across the road and largely unvisited by the non-runners I was in step with, a door without a house contemplatively opened and closed itself in a makeshift wind (Maggie Carson Romano’s “Slam”). The simple mechanics of the piece touched by the late afternoon sunlight created something quite beautiful. Viewing art literally in a light that’s different than that of the studio or the gallery, and that is constantly changing, is a rare treat. 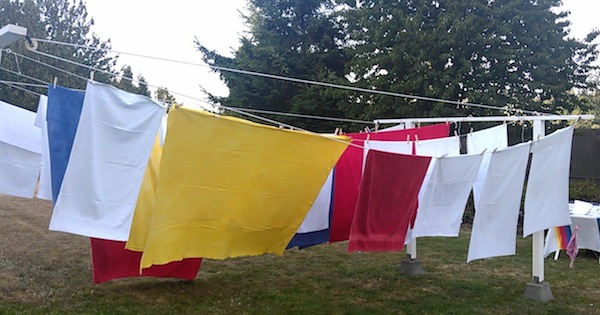 Julia Haack’s sculptures “Single Seater (Quilted Arches)” were a curvaceously colorful entrée into the I-90 trail, where pieces were either screamingly obvious, like Chris Buening’s and Seth Damm’s clotheslines in “Into the Fold” (above, photo by Rachel Shimp) and CM Ruiz’s intentionally amateurish and perplexing sculpture “A Mouth,” or were so carefully integrated into the environment as to be hardly perceptible. Anne Blackburn’s latest strain of “Invasive Species” (below, photo by Miguel Edwards) rose from the ground in toxic yellow and black tendrils, and caused my posse to punk ourselves thinking that actual berries nearby, which looked to me like virus structures, were related miniature sculpture. Not the first or last D’oh! Moment of the day—which is something exceptionally satisfying about the NEPO 5K. Are those people peering at a moldy windowsill with a magnifying glass looking for something specific, or are they being punked as well? In one version of doing it right, you’re observing and questioning every bit of environmental data. 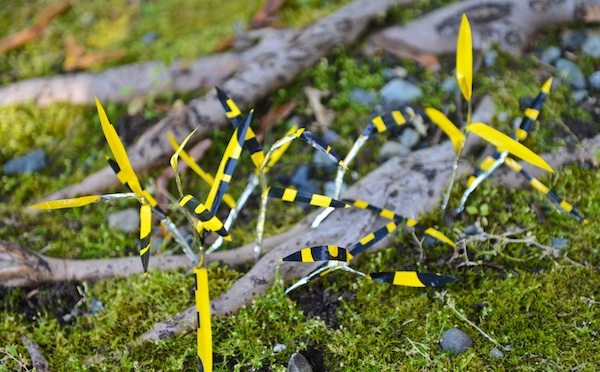 In another, you’re reacting. Roundhouse kicking Nicholas Nyland’s “Punching Bag,” helplessly set up by itself in a field; calling directory assistance (Ha-ha!) from a touchtone phone underneath a tree (The Yé-Yé Collective’s “Telethon”); and trying to decode the placement of pieces in Paul Komada’s emotionally-charged install “How to Fold an American Flag.” 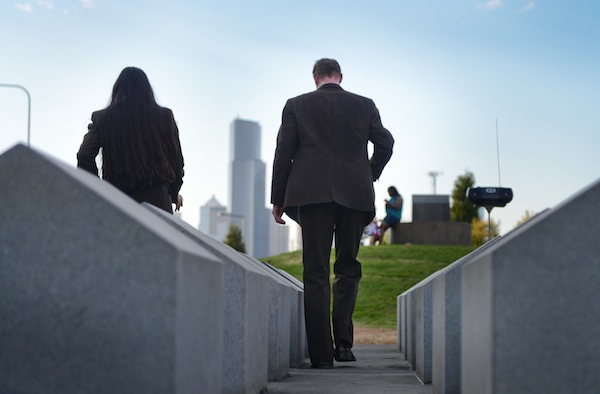 I read all the performance art very literally: watching Jose Bold (aka John Osebold) in a brown suit, running around the small concrete houses that were last year’s “Mini Mad Homes,” (above, photo by Miguel Edwards) I thought of the monotony of office work. “Not So Easy Chair” had brave souls sitting on A K Mimi Allin, whose arms, legs and face protruded from inside the chair, and who then asked you uncomfortable questions. Keara Rhoades’ processional of people dressed in white reminded one non-runner of Bergman’s The Seventh Seal, but was titled “When They Move They Take Their Fence with Them.” And Erin Elyse Burns’ “Tumbleweed Trundling” (below, photo by Miguel Edwards) was exactly that. Burns rolled the enormous ball of spiky weeds all the way to Hing Hay Park, a thankless task becoming a triumph and ending at a Polka party beer garden. 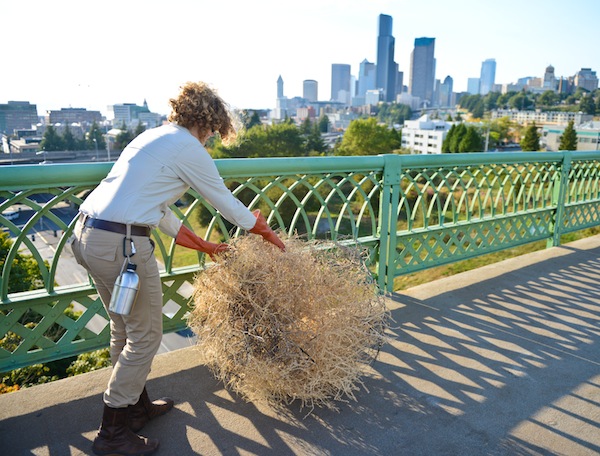