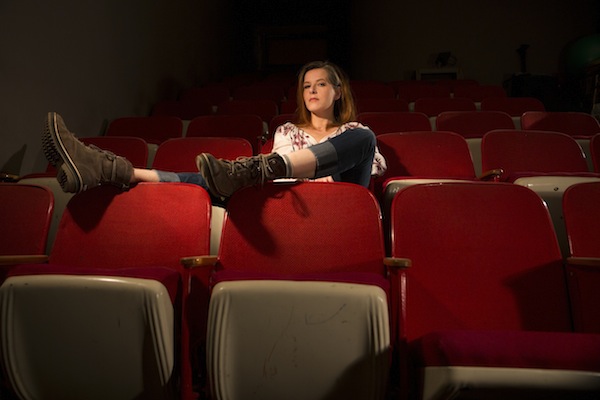 That run-on sentence might look like a merch booth plug—make sure you grab the album on your way out!—but by the end of Wednesday’s concert, it seemed more like a plea.

Still reeling from a cold, the long-ago Seattle resident explained four songs into the set that if anything went wrong, “it’s because of mucus.” Certainly, no longtime Case fans left the Paramount believing she’d played her best show, her energy level visibly sapped. But the crucial stuff—her somber songs, her cutting wit, her nimble band and, lord, that voice—came through in a nearly two-hour set that saw her fight very, very hard.

Fans who know the singer solely through her albums might think her a melancholy, humorless sort, thanks to her dark folk tales and tortured country takes on romance, and the show’s stoic opening didn’t help that perception. Dressed in a black cocktail dress and sporting a massive tuft of her signature red hair (now cut with a gray streak), Case opened the set with the morose new track “Where Did I Leave That Fire” and a muted version of “This Tornado Loves You” that sounded more like a little dust storm.

Thankfully, by the fourth song, “Lion’s Jaws,” Case uncorked both her booming voice and her knack for friendly, wiseass banter, joking that backing singer and longtime friend Kelly Hogan would “whip out her high-note codpiece on this one” before herself setting the soulful song on fire with a goosebump-worthy final cry of the word “momentum.”

Case’s band was made up mostly of old standbys, and it’s no wonder she hasn’t thought to replace them. Hogan served as much a backup singer as a crutch; indeed, as the 24-song set went on, the ridiculously talented Hogan leaned closer to the mic to fill in a few high notes, but more crucial was her crowd work. “Got these at Goodwill for $4,” Hogan joked as she showed off her sparkly heels to kill time while Case quietly prepped a song. “Wonder what drag queen used to own ’em.”

Another longtime band member, John Rauhouse, proved his multi-instrumental chops by hopping from pedal steel to guitar to banjo to even trombone. His play didn’t match so well with Case’s more fiery fare, particularly “People Got A Lot Of Nerve,” a song she recorded with the far rowdier country band The Sadies, but he proved his might on slower, richer songs like “Lion’s Jaws” and “Blue Moon Baby,” making the most of spare arrangements, letting notes rattle as the Case/Hogan duo filled the Paramount from floor to ceiling with ringing vocal turns.

And while Case was less than 100%, even ducking out twice to (assumedly) seek vocal relief, her personality was still in attendance, whether by comparing Rauhouse to a sweatshop worker (“He gets a Cup-O-Noodles, and a seasoning packet”) or by giving a request-shouting fan some good-natured hell (“Do I look like I’m wearing an apron to you, sir?!”).

More importantly, her voice held out. With hands outstretched like wings, she tore brazenly through one of the show’s few country-fueled cuts, the 2000 classic “Set Out Running,” and during the song’s silent conclusion, the room turned pin-drop quiet as she nailed its every note. Her only vocal falter was nearly indiscernible, when she and Hogan bailed on the crazily high notes that bookend her new album’s best torch song, “Night Still Comes.”

Still, the lengthy set, which included almost every song from The Worse Things Get, saw Neko hold up until the absolute end, when she returned for a second encore to belt—or, at least, attempt to belt—the challenging and gorgeous “I Wish I Was The Moon.” Its closing cries of “I’m so tired, I’m so tired” said plenty, but by then, she’d proved with equal parts gorgeous performance and hilarious chatter how much she loved this Seattle crowd.