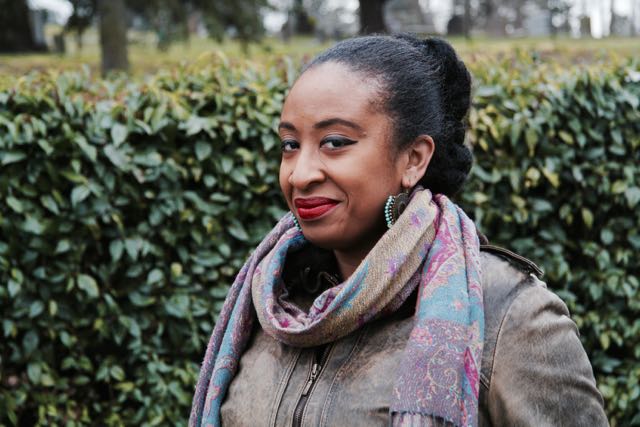 Joggers catch their breath on benches. Tiny dogs are let off leashes. The gray-blue sky suggests gentle temperatures, but the air is as brisk as Negarra A. Kudumu’s step.

“I’m always thinking, always working on something,” she says while crossing the street toward Volunteer Park. “Walking is a way to clear my head.”

If Kudumu is not working as manager of public programs at the Frye Art Museum, writing essays or curating exhibitions, the Chicago native walks the neighborhoods of Seattle, often from the Central District to Volunteer Park on Capitol Hill. When we meet up on a Saturday afternoon, Kudumu shifts into an uptempo stride to take us to her site of solitude: the Grand Army of the Republic Cemetery, where mismatched patches of fresh grass are lined with worn tombstones of Civil War heroes. “It’s a strange place,” Kudumu says. “But it’s quiet. I can think there.” Seattle’s serenity is one of the reasons Kudumu has felt so at home since she moved here three years ago.

“It’s so laid back,” she says. “The West Coast vibe agrees with me.” Yet Kudumu’s pace is anything but laid-back. In the past two decades she earned degrees in Latin American, Latino and Caribbean Studies at Dartmouth College, took up residence at turns in the South, New York and Brazil, then earned a graduate degree in International Relations and Diplomacy at Leiden University in the Netherlands, after which she worked for a nonprofit in the Hague. Walking back from the park on sidewalks beset by jutting roots, we talk about the bluntness of the Dutch (“Quite rude but at least honest”), European joie de vivre and being new and not-so-new to Seattle’s art scene.

How did you find your way into the art world?
Art has always been a part of my life, but when I was younger I was more interested in the social sciences, because, in part, I was trying to get a sense of the world. I knew next to nothing about Latin America, so I went to study it. I wanted an international career, so I studied International Relations. Over time, I became disenchanted with how the world of international relations fell short of explaining what was going on in the 21st century. I found there was very little attention to how the world was transforming in terms of demographics, race, gender and the changing axes of power. What was missing was culture. I believe culture, and thus art, has the capacity to explain the world in ways other disciplines fall short. From the Arab Spring, to unbridled capitalism, the resurgence of right-wing and racist populism in both the US and Europe: Culture can talk about these questions in a more profound way. I do not need a perfect answer, but I want a discussion that helps us formulate better questions.

Why did you move to Seattle?
My decision to move here was pretty random. I wanted to go somewhere where I could have a good quality of life and make a career for myself—so not New York. My aunt and uncle had lived here for quite some time and loved it. They opened their network to me and introduced me to Royal Alley-Barnes, then executive director of the Langston Hughes Performing Arts Institute. Alley-Barnes offered me an artist-in-residence position. I don’t consider myself an artist, though there are some similarities between a writer—which I am—and an artist. But during this time I developed and executed public programs, conducted research into the performing arts and did some community engagement to support Langston’s existing programming. I loved how LHPAI, as the only performing arts organization in Seattle dedicated to the Black aesthetic, was doing a lot of youth work.

You’ve carried over this idea of outreach in your job at the Frye, first as educator and now as manager of public programs. What is it exactly that you do?
Even in a free institution such as the Frye, people don’t always feel like art museums are for them, unfortunately. That may have been true decades ago, but I don’t want that to be the case going forward. Part of my job is to dispel that vision and reach out to the community. Community engagement is a big buzzword, but it requires a lot of planning and strategizing. In the end, you’re engaging the young people who, in five to 10 years, will be young adults interested in going to museums. If you start them early, they’ll spend their lives engaging with art. It’s about relationships, consistency and showing them that this is a place for them, shaping an experience that can help them.

How do you do that?
You have to talk to people. You cannot just sit at your desk. When I arrived at the Frye in 2014, they had a strong outreach program. Since then, I’ve tried to diversify the studio class teaching artist roster the experts we call on for lecture series and exhibition-related programs. My background allows me to approach this from a multi-disciplinary standpoint. In the 2015 exhibition Future Ruins, Rodrigo Valenzuela brought up topics of immigration, labor and future scenarios for the world. To address the questions in the exhibition, I put together programming that included a labor activist, a labor-union representative and a woman with a background in geography who spent her career writing future scenarios for governments in East Africa and Asia.

You’ve also organized the youth video and photography exhibition Those Without Voice at the Frye. Did you do any curating?
I was merely facilitating the Museum’s ongoing Partnership for Youth program, a collaboration between the Associated Recreation Council RecTech Program at Yesler Community Center and the Frye. This annual program offers skill-based art training to public school students with past and present connections to the Yesler Terrace community, resulting in an exhibition of student work. I was the liaison between students and the museum. Teaching artist Derek Edamura provided instruction in digital photography and video, but the ideas came from the kids. They already know what they think. We just need to teach them to be critical thinkers, allow them time and space and top-notch training to put together the statements they want to make. It worked out great. I find the work to be very mature. That’s the way we treat it at the Frye too: an exhibition like any other.

You’ve recently co-curated the exhibition Back Stories with Seattle-based gallerist Mariane Ibrahim. Are you exploring a new career path?
When Mariane, who has become a personal friend and mentor, asked me to co-curate an exhibition about backs, I didn’t hesitate. Since last year, I’ve wanted to
move into a curatorial direction in my independent practice, so this was a tremendous learning experience. On March 21, I’m launching my first independent foray into curating: the Curatorial Lab, an online exhibition platform. The first exhibition is by Jakob Dwight, an Atlanta-based multimedia artist whose inaugural Curatorial Lab project is NCHI. I see the Lab as a way of flexing my muscles as a new curator and I hope it will bring visibility and opportunities to both the artists and myself.

Will you follow a gallery schedule?
I’m hoping to show an exhibition every eight to 10 weeks. I wish I could do more, but I also have a full-time job, and am working on other projects too. I’ll keep writing and there might be a book project in the pipeline. Reinforcing and growing the Frye’s community engagement activities is also really important to me, and I’m hoping to work toward a long-term strategic plan. I can talk all day about it and say how I want to bring in 3,000 students of color, but in the end, if I don’t act and find money to back it, I’m just blowing hot air. I want to act to the greatest extent possible.

Those Without Voice is on view at the Frye Art Museum until April 2. Back Stories is on view through March 25 at Mariane Ibrahim Gallery. Kudumu’s Curatorial Lab launches online on March 21 at www.negarraakudumu.com.