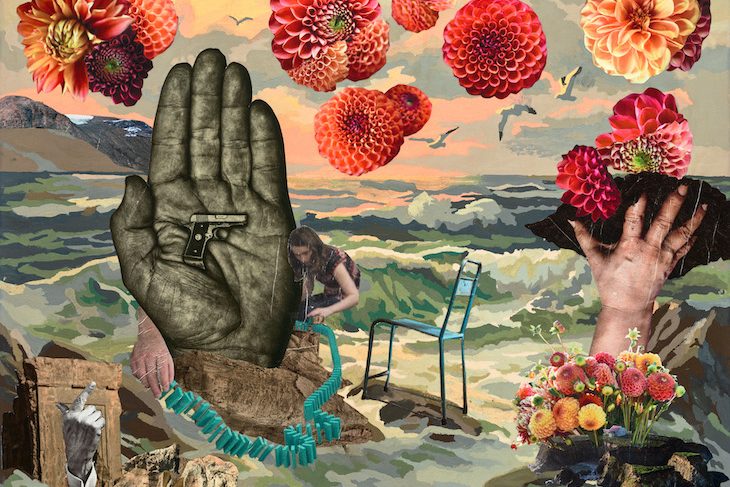 'Oh the Beauty,' collage on paint by numbers by Nancy Guppy

As a music journalist, I understand the plight of the arts-adjacent non-artist, the fascinated, interested party who stands in awe of creative excellence but prefers to spotlight the creative expression of others rather than their own. It’s an important role to play, that of the taste-making recommender eager to elevate others’ excellence, rarely pressured into delving into their own. It’s a role that Nancy Guppy has played weekly since 2015, as the ever-inspired host of Art Zone, where she uses her Seattle Channel variety show to survey the city’s panoramic creative landscape. (Full disclosure: I’ve appeared on Art Zone a handful of times over the years.) Guppy plays the part well: She has great taste, great enthusiasm, great comedic timing.

In truth, Guppy knows the throes of artistic expression because, like it or not, she’s an artist herself: She’s written for sketch-comedy and stage for years. And today she takes a further step into legitimacy with the opening of her first show of visual art.

Opening tonight at Solo Bar, The Further Adventures of Snippity Snap features 20 of Guppy’s collage works, playfully collaged, surrealist explosions of color and shape and composition. The show stems from a collage she contributed to a Bumbershoot project in 2011, a practice she surprised herself by maintaining in the years since.

Each piece begins as a paint by numbers painting sourced from friends or the internet; Guppy then defiles art books, architecture magazines and other glossy print matter with an X-ACTO knife, filigree that she adds to the pre-existing painting. The work is keenly balanced on the edge of maximalism—for all the cartoonish humor they unleash, her collages are remarkably subtle and sly. They are, to use a word unpopular in the fine-art world, fun.

As we sat down to lunch at Le Pichet last week, I wondered if it was hard to put her own creativity on display and how making visual art relates to making a TV show.

Nancy Guppy: I find it to be a profoundly interesting experience because it was such a non-linear creative project. I’m a writer, I perform, I interview, whatever. Everything I do, to me, has a very clear, straightforward structure, so this was like getting lost in a new way of thinking and trying to be creative. And it was all about balance. It’s all about shape. It’s all about color.

It’s been interesting in this six years in that how I do it has completely changed. When I first started, I didn’t incorporate the paint by number thing  as much as I do now. I would cover it. I don’t know why. I just did.

Cutting with an X-ACTO is meticulous but it’s also kind of mindless. Like you have to sit there and really pay attention to the physicality of it but your mind is allowed to go elsewhere.
That’s a perfect way to put it. It’s a task where you have to be, like you said, really careful, but you’re not trying to think of big thoughts.

You aren’t calculating.
No. Once you get it done, then you’re going into a different idea of, “How am I going to place this?” Or, “Do I like this?” [laughs]

I did another round of them a year and a half ago, and some friends were like, “God, those are really great. Are you going to show them?” I was like, what are you talking about? No, that’s ridiculous and embarrassing to even say to me! That’s so stupid. But they planted the idea.So I thought, “What if I could?” I know Val and Elizabeth [of Solo Bar] and so I got ahold of them. I emailed Val a year and a half ago, and I gave him every out in the universe. Basically, I got to the point where I was like, “Just say no right now.” And he wrote, “Of course, we’re interested.”

There’s a very playful throughline to these pieces, almost subversive.
Very much so. Because my background is writing comedy and sketch comedy, I love to bring that element into this too. So it’s like I’m bringing in my whole background here. I’m all about self-deprecation. I mean, I’ve got an ego, of course, but my way of moving in the world is always… I will always kind of go a little bit low. Does that make sense? Because I can get what I want that way.

Are you selling your talents short? Is that a concern? Are you hoping to sell them?
Great question. I’ve been told that many times. At first, I didn’t even know if I was going to sell them at all, that seemed absurd to me. And then I was like, “Well, okay.” So now I’m figuring out the pricing thing, honing in on what feels okay to me, what feels right. I don’t want to feel pretentious.

God forbid.
I’m really sensitive about that. And it’s a complicated thing because I obviously have enough pride in this that I’m doing it. I’m telling people about it. So it’s not like I’m hiding it.

You’re walking a fine line. Some visual artists might see this and say, “She’s just a hobbyist.”
Oh, I think absolutely people will. I’ve said to numerous folks, “I’m not saying I’m a visual artist.” They’re like, “What are you talking about? If you’re an artist, what does that even mean?” Well, to me it means you’ve done it for a long time. You probably are represented by a gallery. And it’s kind of your life’s work.

Right. Something about those 10,000 hours, maybe. Dedication.
Absolutely. So I’m not presenting this in any way as like, “Oh, yes. This is my body of work, my ouvre.” Right? I think there’s going to be people like, “Oh god, are you kidding?” And they might even say, “She’s getting attention because she’s in the public eye,” or whatever level of awareness of me there is in the community. Well, maybe. I mean, I can see why you might think that. And anyone can do whatever they want in this world.

That’s another sort of concept or point to be taken away from this.
Yes. Yes.

But then it comes down to the quality of the work.
Absolutely. And I would say that there’s enough for everybody. I mean, just in the big meta, there is enough. Me doing this has no relevance or bearing on you doing it or you having a show or you being discovered or whatever else. There’s no connection between the two.

The Further Adventures of Snippity Snap opens tonight at Solo Bar and runs through June 20.