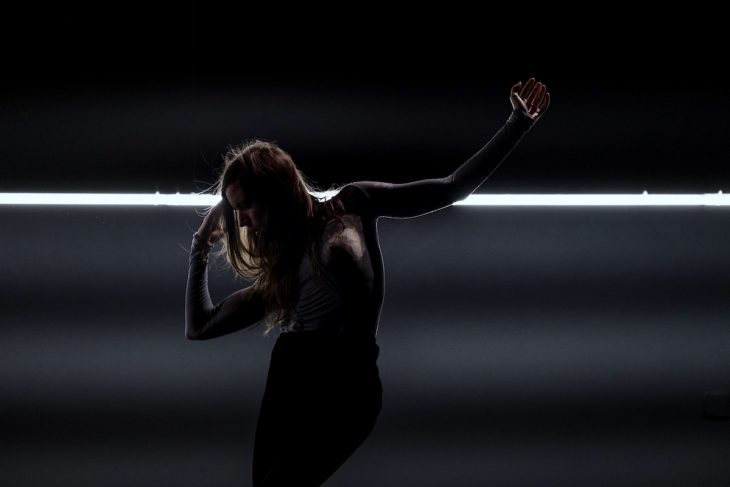 Settling into the bustling opening night of Kate Wallich’s Dream Dances at On the Boards, it’s easy to miss that the piece has already begun. A dancer lies facing away from the audience, completely still, until a single slender arm floats up, down and then returns to stillness. Dancers sidle in one by one, so quietly they seem to appear out of thin air. Every so often a gentle, floating gesture momentarily disrupts the stillness of their prostrate bodies. A rippling spine, a treading of feet in the air.

Gradually the intermittent gestures become more frequent and larger, eventually bringing the dancers to standing. The slow opening leaves plenty of time to contemplate the stripped-back set. Bare theater walls and lighting rig completely exposed, the space only adorned by two large piles of sculptural black material—netting tangled with lumber upstage and crumpled black plastic stage left. The production design (Amiya Brown) along with long whistling notes, provided by composers and performers Johnny Goss and Andrew J.S., contribute to the sense that these dancers are floating in a void, perhaps a dream world.

The energy shifts when dancer Thomas House suddenly animates. His eyes focus, his movement takes on a specificity that describes a world we cannot see, as if he’s operating an invisible machine. Suddenly, we’re watching five dancers engulfed in their own experience, the same way dogs run in their sleep, except of course they’re fantastically talented dancers. The crown jewel among them is Lavinia Vago, long-time Wallich collaborator and co-director. Her movement has an inward quality that feels as if we’re seeing something very private. She fidgets and stumbles and drags her body in the splits, but this awkwardness is performed with such perfect control and stylization that even the most bizarre movement is graceful.

Wallich has a distinctive choreographic signature, so both House’s and Vago’s imagistic movement is clearly derived from their own sensibilities. The program notes that improvisation based on dreams was a tool in the choreographic process, which explains the disparate quality of each dancer’s movement. Tom Weinberger’s dream exhibits his super-human control—lunges, kicks, off-center turns that change direction on a dime—each transfer of weight impossibly smooth. David Harvey’s dreams are perhaps the anxious type, as he spends most of his time pacing back and forth, which grows to be an irritating distraction from the other, quieter images in the space.

Classic Wallich movement makes an appearance, as Wallich herself is also a performer in the work. While she spends most of the time playing second fiddle to her collaborators, there is one moment where the beat drops and Wallich directs her movement forward: arms swinging, head diving, charging toward the audience and punching the air. It has an intent that remains distinct from the rest of the meditative work and showcases Wallich’s ability to command space. This powerful moment quickly fades, however; true to the nature of dreams, each image slips away as easily as it came.

The irony in this work is that while the pace is very slow and meditative, there are always too many distinct things going on at once to sink into any one point of focus. Perhaps this is an intentional layering of images to obscure the beginnings and endings of action—watch something for a moment and you’re likely to have missed a shifting somewhere else. Images become increasingly disjointed. Vago sprays a garden hose at a crumpled, black kiddie pool for 10 minutes. A couple dancers stretch and snap Therabands with complete seriousness. A mysterious black package falls out of the sky and thumps to the ground. In one potent image, House crawls beneath the pile of crumpled black plastic, creating a large garbage bag monster that could have developed into something really interesting, but sadly lasted only a few moments.

Dream Dances is a maturation of earlier Wallich works that stemmed from millennial ennui. While the departure from angst is perhaps a good one, there is a question of what replaces it. This piece purports to be a study in form, a gutsy move in an art zeitgeist that’s all about storytelling and politics. Theoretically, I’m on board with esoteric aestheticism. In practice, however, I’m left with a nagging feeling of why? If this is a study in form, then the combination of choreographic elements should ultimately create a compelling whole; the form itself should have something to say. Wallich clearly knows how to put together interesting dance material, but Dream Dances doesn’t convince me of aesthetic-driven material’s capacity to inspire.