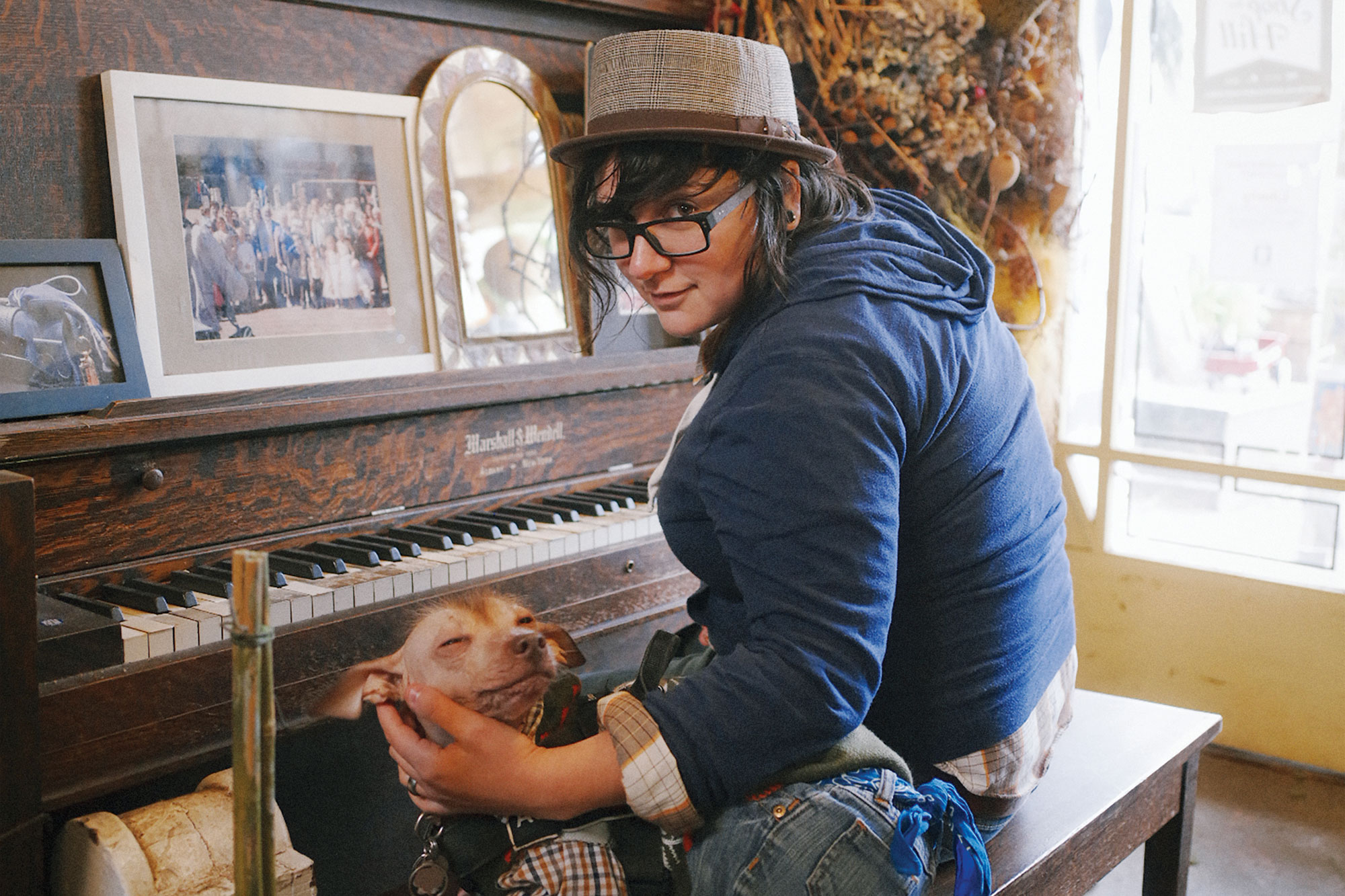 Xolie Morra has the kind of voice you feel lucky to hear. Huge, emotional and capable of shifting from a warm purr to a full howl without Morra breaking a sweat, this voice is showcased by Morra’s songs—melodic folk tunes typically devoted to matters of the heart and revved up to alt-country toughness with aggressive guitar and drums.

In November, I got to watch the voice of Xolie Morra blow away a packed house at McCaw Hall, where Morra was appearing as part of the 2015 TEDxRainier conference. Performing with her band the Strange Kind, Morra sang “C’est L’Amour,” an original tune that features some cool tricks, like a verse in French and a pair of trumpet solos. It took everyone a minute to note that Xolie Morra’s band does not feature a trumpet player; her “trumpet” is her mouth. If there’s a gimmicky aspect to Morra’s mouth trumpet, it dissipates in seconds, its uncanny expressiveness becoming just another dazzling facet of her voice.

This voice and the music behind it have opened doors for Xolie Morra and the Strange Kind. Over the past few years, the band has opened for John Mayer and Crosby, Stills & Nash, and been featured at the 2010 Lilith Fair. But the biggest break came in 2014, when the band performed on Jimmy Kimmel Live, closing out the show with “Over My Head,” a Morra original that captures everything she does so well.

Morra’s powerful onstage presence is made all the more remarkable by her demeanor offstage, where she’s likely to be reserved, soft-spoken, halting in word and deed. If she’s feeling stressed or overwhelmed by outside stimulus, her tics emerge—hard blinks, temporary stretches of closed eyes, and a general jamming of her language channels, with words seemingly fighting their own expression before leaping out in a stammer. By her side you’ll usually find her dog, a medium-sized Mexican Hairless kept warm by tiny jeans and a denim jacket. Before long she’ll happily explain everything.

“I have autism,” Morra tells me. “I’m a musician, first and foremost, and autism is a huge part of who I am.”

Morra received her autism diagnosis six years ago—when she was 30. “As a child I was too high-functioning to be diagnosed,” she says smoothly, the only hint of her tics being the special earplugs she wears to limit the power of outside stimulus to overwhelm her. “I had all the social difficulties you’d expect of someone on the spectrum. I didn’t pick up on vocal cues and body language, I took things very literally and I obsessed on topics that have stayed pretty consistent to this day—mostly dogs and music. I had so many spectrum traits but no one could put a name to it.”

As she moved into her late 20s, Morra’s physical and verbal tics intensified to the point of making communication a challenge, fueling her hunt for an explanation. Eventually she got her diagnosis: Asperger syndrome, or, as it’s called now, autism spectrum disorder.

Getting a name for her condition was a life-changer, a lens that brought confusing parts of her life into focus and helped others understand her. “Before my diagnosis, people just thought of me as being really hard to work with because I was so particular, and I didn’t know how to express things.”

Prior to her diagnosis, Morra’s coping maneuvers could be misconstrued as just screwing around. Years ago at a recording session, she was feeling overwhelmed in the studio, so she took a break to focus on the contained, controlled world of a video game—a reliable fix, in her experience. “The producer saw it as me being unprofessional,” she says. “But for me, it was a way to get back to being professional. Now that I have the diagnosis, I’m having an easier time being taken seriously.”

Born into a family of music-makers in northern California, Morra has always been immersed in music. “When I was a kid, my mom would take me to the Dixieland Jazz Festival in Monterey and we’d meet a lot of people who knew my grandfather,” she tells me. “I never got to know him, but he had a band when he was alive. My mom introduced me to some of the people who knew him, and I would get to hear the music.” Beyond jazz was a wealth of other influences. “My dad was into folk and bluegrass, my mom was into Motown and my uncle Jim loved classic rock.” Morra absorbed it all.

Along with music came a love of wordplay, instilled by her mother, who got her started on rhyming games as a kid. As a teen, Morra crafted new lyrics to other people’s music and eventually wrote songs of her own. As she tells me, these first songs were heavily indebted to her favorite artists at the time: the Cranberries, Tori Amos, Ani DiFranco. As she moved through her 20s, Morra found her own sound, which immersed the folky melodies and open-hearted lyrics of her influences in the racket of a full band.

When I ask what role her autism spectrum disorder might’ve played in her musical development, Morra cites the often fraught task of translating the perfect vision in her head into the world. “I have a constant radio going on in my head,” she says. “When I write a song, I hear something fully produced, from beginning to end, and I know exactly where things will go. But I’m not so particular that there’s no artistic input on the part of the performers. When I work with people, I encourage them to find their own parts, to come up with something that’s gonna blow what I’ve got in my head out of the water.”

Finding collaborators who wouldn’t try to “fix” her was only one of Morra’s goals. “I also wanted a band where everyone in the band is a performer,” she says. She found her ideal bandmate in Brett Hutchinson, an expressive drummer who answered Morra’s Craigslist ad four years ago and soon found himself starring alongside Morra in the Strange Kind. “When Brett plays, you can just see what he’s feeling,” Morra says.

Hutchinson’s pleasure at making music with Morra is evident to all who see him onstage, where his blissed-out grin hovers placidly above the tornado of hands, knees and elbows below. Still, there are challenges, he says, citing Morra’s motor tics, social anxiety and an obsessive connection to the perfect sound. “She’s an amazing musician who makes beautiful music, so that helps,” Hutchinson says with a laugh. “We butt heads, but we eventually come to an understanding. We’ve been working together for four years and we’ve gotten very good at communicating.”

A key point of communication for Morra and Hutchinson for the past two years: The Great Social Experiment, the debut full-length release by Xolie Morra and the Strange Kind, recorded at Shoreline’s London Bridge Studio and Seattle’s Red Room Recording, and currently being mixed and mastered by Matt Bayles in advance of a spring 2016 release.

The kinetic chemistry between Morra and Hutchinson is dramatically evident on “Break Away,” The Great Social Experiment’s first fully mastered track. It’s an expertly hooky classic-rock number made special by the interplay of Morra and her drummer, who offsets Morra’s great warm wail of a voice with a prickly beat that changes to meet each line of the lyrics and moves the song to musical places beyond the reach of so many singer-songwriters.

Hearing the music, it’s easy to forget about Morra’s days spent navigating tics, over-stimulation and compromised communication. “Singing and playing guitar gives me a release,” she says. “It also causes me to switch off the tics, because music bypasses all the misfiring locations.”

Morra would love to share that freedom with everyone, especially those on the autism spectrum. Along with ripping the world’s heart out with her music, Morra’s goal is to change the popular perception of autism.