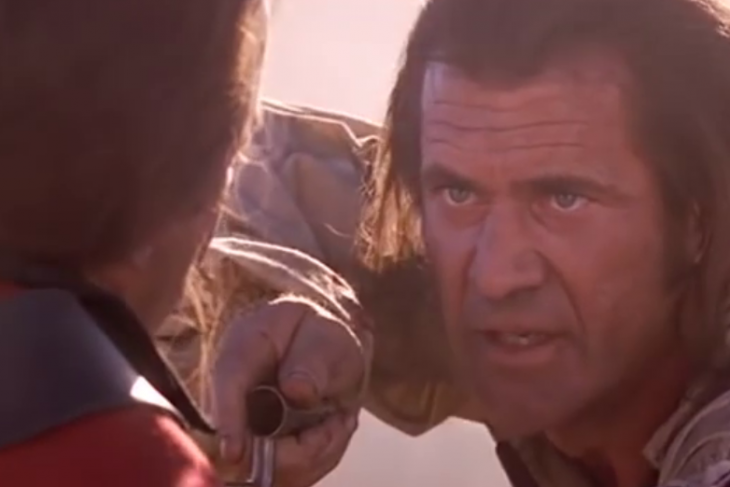 This country is far from perfect, but that’s why the Fourth of July is a perfect celebration of its birth: everything noble and questionable about our history and culture is compressed into one glorious day. On the one hand, you get a sober reflection of our history and the enlightened document that represented a brave repudiation of tyranny. Families and friends gathering together in peace and fellowship. On the other hand, you have people getting hammered, stuffing their faces with borderline poisonous junk food and blowing shit up in parking lots. Yep, that’s pretty much America.

I wanted this list of patriotic films to represent both undeniably true sides of our national consciousness. So I picked five pairs of movies, one to reflect our better angels and the other to appease the obnoxious, beer swilling troglodytes that live inside all of us. Helpful hint: watch the first one before you drink nine Rainiers. Save the second one for after.

I realize that you probably won’t have time to watch the entirety of HBO’s meticulous and well-cast seven-part miniseries over the weekend. You’re not me, after all. So just watch episode 2, Independence. It’s got all the good stuff: the second Continental Congress, Jefferson writing the Declaration, Washington being appointed as the head of the Continental Army. Then, when you get tired of stuff that’s true, you can enjoy Mel Gibson stabbing a horse with an American Flag in The Patriot. That seriously happens. That’s just a taste of the kind of wonderfully idiotic bullcrap you have in store! It’s the American Revolution, brought to you by a megalomaniacal anti-Semite and the moron who ruined Godzilla. What could go wrong?

Charlie Wilson’s War (2007) + Red Dawn (1984)
The long-simmering hostilities between the US and the Soviet Union brought out the best and worst in us. Charlie Wilson was a Democratic Texas Congressman (those once existed!) who helped funnel arms and resources to an Afghan Mujahideen desperately fighting off a brutal Soviet invasion in the waning years of the cold war. The movie was written by Aaron Sorkin, which means that it’s got loads of hilarious, quippy dialogue and it lacks the historical accuracy of, say, The Young Indiana Jones Chronicles. But it is a highly entertaining story of a deeply flawed man trying to do the right thing in a complicated world.

Red Dawn is also about the cold war. Namely, how the cold war brought out some of the basest, most paranoid instincts in a historically paranoid populace. Actually, that’s not what the movie is about so much as why the movie got made. Soviet and Cuban (!) troops invade the USA (!) and a group of teenaged freedom fighters led by Patrick Swayze (!) and Charlie Sheen (!) become battled-hardened insurrectionists. It sounds ridiculous, because it is. But the sincerity that noted cigar-chomping, gun-toting, conservative whack job (and semi-genius) director John Milius brings to the proceedings makes it seem almost transcendently odd. “This COULD happen!” the movie seems to be imploring. Nope.

Platoon (1986) + The Green Berets (1968)
You might have plenty of criticisms of Oliver Stone’s politics; I know I do. He’s kind of a lunatic. But during an amazing stretch in the ’80s and ’90s he made technically masterful, crazily ambitious, deeply felt movies about American culture and politics. Platoon is his most personal film, a semi-autobiographical depiction of his experiences during the Vietnam War. It’s not exactly a hopeful portrayal of the conflict and American intentions, but it is emotionally honest: a harrowing trip to hell created by a person who actually went there.

John Wayne, on the other hand, did not fight in Vietnam. That might have had something to do with why he was such a rabid supporter of the conflict, to the point where he even directed a laughably mendacious propaganda film in support of it. Wayne was no great shakes as a director, but that’s only part of the fun. It’s flagrant, unrepentant, straight-faced horseshit. Reefer Madness for war hawks. You have to see it to believe it.

All the President’s Men (1976) + Rocky IV (1985)
In President’s Men, two intrepid journalists, armed only with notepads and bottomless reserves of patience, brought down the powerful and corrupt Nixon Administration. That’s an incredible story on it’s own, but Alan Pakula’s flawless, spare direction and iconic performances from Dustin Hoffman and Robert Redford make this one of the greatest films of all time; a modern day David and Goliath story.

Rocky IV on the other hand, is a Goliath and (slightly smaller) Goliath story. It’s Rocky Balboa vs. Ivan Drago, sure, but it’s also small, plucky United States vs. implacable, dominating Soviet Russia. It’s another hilarious cinematic symptom of Cold War madness that really struck a nerve with an American populace that actually somehow thought that they were the underdogs in the conflict. The Soviet Union collapsed under the weight of its own rust six years later. As far as we know, Mr. Balboa had nothing to do with it.

The Best Years of Our Lives (1946) + Transformers 2 (2009)
I can think of no better illustration of the gulf between American aspiration and reality than these two films. They are, simply put, the best and worst our nation has to offer. The first one is a truly beautiful film by William Wyler about three WWII veterans coping with the difficulties of life in a country that often seems to have forgotten about their sacrifices. It is hopeful but honest. It’s filled with so much heart and so much affection for its characters that I’m tearing up a bit just typing this brief synopsis.

The other one is a big, noisy, hateful kaleidoscope of bad ideas, violence and casual bigotry and sexism. It’s a jarring, misanthropic cacophony. Transformers 2 actually does not mean well. To give you an idea of exactly where I fall on this spectrum of American decency, I’ve seen Best Years three times. Trans 2 I’ve seen five.