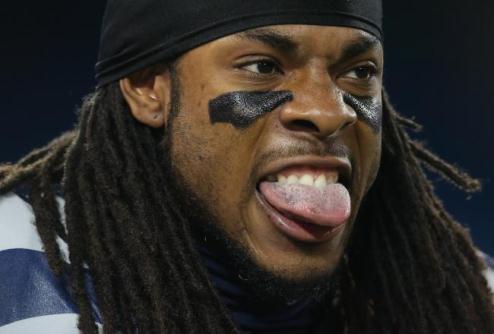 Search YouTube for “Seahawks anthem” and 73,300 returns come up. Only two are essential (and neither is on YouTube). The first, which came out this time last year and went viral, is “This Ain’t a Seahawks Anthem” by Spekulation and Prometheus Brown. The other is “Sherm Stick” by Shabazz Palaces, which came out last Friday in the wake of Seattle’s Thanksgiving day victory over the 49ers.

At one minute 10 seconds, “Sherm Stick” is more an extended riff than fully formed song, but it’s remarkable for a few reasons. First, the word-dense ode bubbles with countless one-liners and analogies dedicated to cornerback Richard Sherman: “On the corner I’m the fresh one.” It also counters Shabazz’s usual MO in that a. It’s a song about sports, and b. It was clearly cranked out and released quickly, without much forethought. Shabazz mastermind Ishmael Butler usually incubates ideas and births them only after they’re meticulously polished. “Sherm Stick” feels raw and rough and energized, aiming for (and nailing!) timeliness and energy rather than perfect craft. Instead of Butler’s typical metaphysical metaphor, these bars are immediately discernable—a fun, funny and fully energizing experience and sweet counterpoint to Spekulation’s Marshawn Lynch-loving predecessor.

Butler is an athlete; he played on the UMass basketball team. No surprise he’s a football fan, too. Let’s hope Sherm got a listen.

Shabazz Palaces + Richard Sherman=Seattle sports-music fantasy matchup. How can we make this happen?