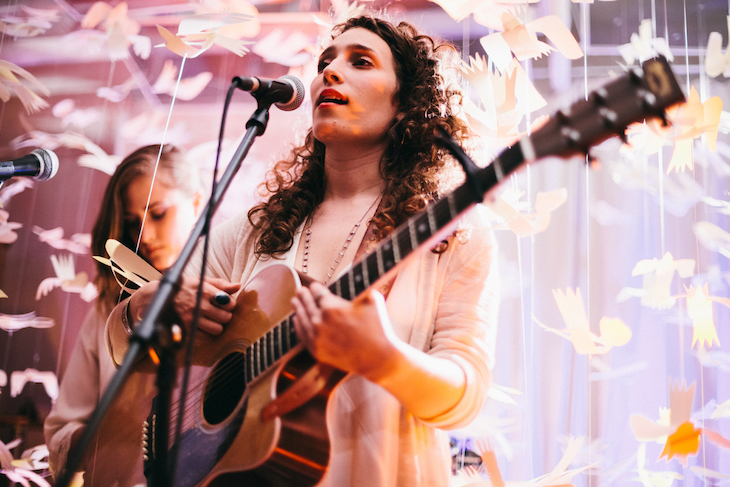 For the last few years, Portland’s Moorea Masa & the Mood has steadily made inroads north via high profile slots at Doe Bay Fest, Timbrrr Fest, Upstream, Block Party and Fisherman’s Village Fest. With a warm, robust voice and easy way with a guitar, singer-songwriter Moorea Masa leads a rotating backing band through nimble, minimalist soul-pop, the kind of intensely gentle music that can convey warm fuzzies at a house show or crackle with electricity at a packed club. (At this very moment she’s touring western Europe and probably performing in a dimly lit palazzo or stylish winery.)

Masa released her latest album a few months ago, and the 10 songs on Shine a Light showcase patient, nuanced songwriting that’s oriented as much around close listening as pop appeal. She enlists a handful of backing vocalists to provide lush harmonies and partners with veteran Portland soul master Ural Thomas for a sensually smoldering duet.

Today we’re psyched to premiere the album’s final song and title track, an anthem of resilience and uplift that Masa says comes from confronting—and releasing—her own past.

“The inspiration for Shine a Light comes from digging into my own darkness, past and present,” she explains. “With a history of being abused as a child I’ve been facing that trauma as an adult, and in bringing it to light allowed me to change for the better. I think we’ve been doing that as a country as well—bringing up all the ugliness that’s been under the surface, and in some ways it’s made greater room for movement. One of my favorite quotes is by Khalil Gibran in The Prophet: ‘Your joy is your sorrow unmasked.’ It can be such a brilliant place when you finally let go of the pain you hold onto.”

For the video, Masa’s production company-owning friends Madeleine and Alan Dean built a tiny model village and put a small girl both beside and inside it. It’s a macro/micro juxtaposition that captures the pain in Masa’s past as well as the salvation she’s moving toward. Check it out below and catch Moorea Masa & the Mood this December when they play the Tractor Tavern.