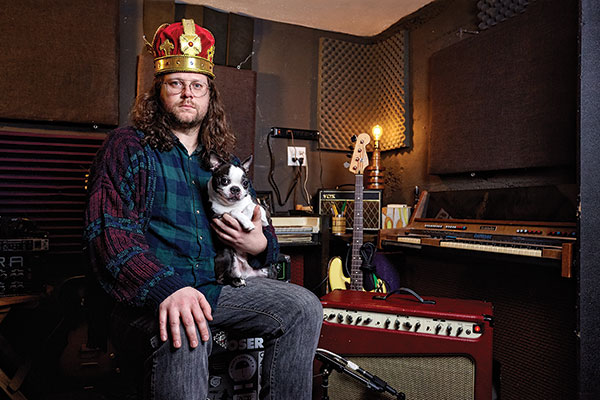 Aaron Schroeder and Ingmar in the live room of Pierced Ears.

If Aaron Schroeder had a mantra, it would be this: Never underestimate the importance of wasting time.

Dawdling, in Schroeder’s estimation, is the mother of invention. As one of Seattle’s most prolific audio engineers, he’s witnessed bands tackle recording like a job, blinkered by efficiency and aiming at results. Which makes sense in the pay-by-the-hour confines of a traditional recording studio. But Schroeder will tell you that brilliance doesn’t come when called; it slips in through the side door when nobody’s looking. In making music, wasting time is a kind of purposeful misdirection, and the more openness an artist has to mull and noodle and fuck around on their instrument without stress or expectation, the sooner they’ll arrive at the perfect note.

And here’s Schroeder, shaggy-haired, bespectacled and grinning, in his homemade no-pressure zone. He named his newest recording studio Pierced Ears, and he’s the cardigan-clad king of this miniature music factory. It is in fact the basement of his Ballard home, no more than 150 square feet, split between a live room, a control room and a kind of entryway/storage zone packed with keyboards, organs and amps and also his washer-dryer. Low-ceilinged, cramped and smelling strangely of dried oregano (?), this place suits his modest, benevolent vision.

“It’s not like you walk in and it’s, ‘Holy shit what a beautiful studio!,’ Schroeder says. “This is where I can afford cheaper rates for bands to get more time.”

Pierced Ears is a culmination of Schroeder’s six years working as a full-time engineer. For most of that stretch, he rented a studio in the Denny Triangle building where Kremwerk is now. For a short while last year he operated a mobile recording studio out of an Econoline van. Over the years Schroeder has quietly—or loudly, rather, but unheralded—worked with the cream of Seattle’s rock ’n’ roll crop: Wimps, Dude York, Rose Windows, Childbirth, Kinski, Posse, Zebra Hunt and 60 or so more artists. His role, as he understood it, was as a clear conduit for each band’s energy, and as a technician correctly placing microphones and calibrating volume levels.

The new space begins a new chapter. With Pierced Ears, Schroeder hopes to facilitate unconventional music and create sounds that don’t otherwise exist in Seattle. Apply his growing collection of vintage gear and boutique mics to dismantle genre, center the marginalized, get weird, have fun. This is his destiny. At Pierced Ears, Schroeder is not only engineer but also producer, creative director, mascot and confidant. A deeper, emotional role, as he describes it.

“I wanna utilize the space to motivate artists to push themselves further. I wanna tap into the feelings behind why the band wrote the song the way they did.”

On a recent Tuesday night, the residential street outside Pierced Ears reveals no sound whatsoever. Around back and inside, with a tide of repetitive guitar tracks and wah-wah trumpet, the band Moon Palace is being born.

Moon Palace, a self-described “all-female queer band,” comprises a pair of twin sisters, Cat and Carrie Biell on lead vocals/guitar and bass, respectively, plus drummer Jude Miqueli, cellist Darcey Zoller and multi-instrumentalist Bryn Santillan. The women have all known each other for 10-some years, since they each arrived in Seattle from their own previous lives, drawn here by the city’s musical magnetism.

“I definitely came here for music and because it was queer-friendly,” says Miqueli. “Being in Maryland I just looked at the map and asked, ‘Where do the laws protect me as a homo?’ And in 2006, Washington was one of the 13 states that protected gay marriage. I was like, I love Kill Rock Stars, I love Olympia, I love grunge. I’m just gonna go there and be gay and be in a band and my life will be fine.”

In the last few years, Miqueli played in the bands Tenderfoot and Wishbeard; Cat had a group called Lucy Bland; Carrie recorded alt-country under her own name.

“I’ve always played with all men,” Carrie says, “and spent years playing and touring with all men. So this feels right, right now, because of the time we’re in. It’s therapy for all of us.”

“Like how Seattle is a sanctuary city,” Zoller says, “we’re making sanctuary music.”

Miqueli had worked with Schroeder before. “It was like, oh this guy is really cheap,” she laughs, “and he’s recorded a bunch of good bands.” The bulk of their upcoming debut album, a shimmering, shoegazy affair, was recorded at Avast! and the Hall of Justice, two high-profile recording studios. The band decamped to Pierced Ears to overdub and add flourish in a more relaxed atmosphere. 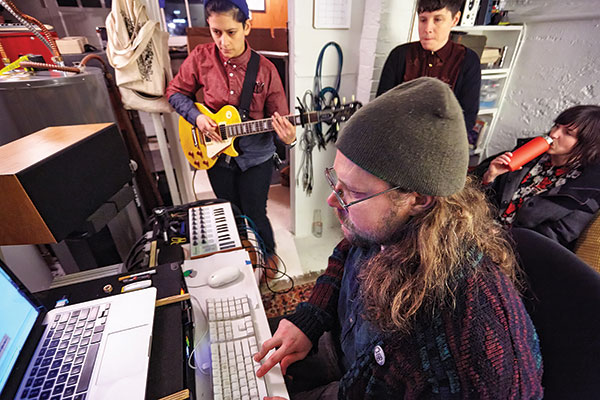 “Working with Aaron feels very organic,” Carrie says, “because there’s some experimental stuff happening during this process as we try to build our sound.”

“We’re writing the album together,” Cat continues. “It’s working backward, in a way. A lot of times bands are in a basement for a year before they record an album, and this way we’re writing it together in the studio.”