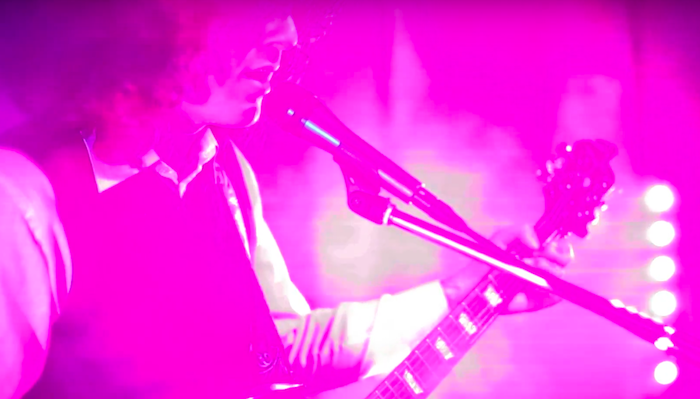 Props to Moon Darling for choosing the Rendezvous, one of the city’s unsung nightlife gems, as the setting for their latest video. The Belltown cabaret has been operating continuously since 1927, first as a silent movie theatre and film-industry see-and-be-seen spot, then a subterranean, Prohibition-era speakeasy, in the ’80s and ’90s as an alt-theatre and grunge-band performance space, and lately as an incubator for all sorts of offbeat burlesque, comedy and live music. The place deserves every shot at enshrinification it can get.

And Moon Darling, as saucy and stylish as the Rendezvous’ red-velvet walls, is the right band for the task. Today we’re psyched to premiere the video for “By the Light of the Moon,” the title song from their upcoming EP, wherein they rock out rather classically on the Rendezvous’ Jewelbox Theatre stage. The Jewelbox is typically an intimate platform but the video, directed by the band, conjures arena-ready ambiance, indebted as much to smoke and lights as Michael Julian Escobar’s androgynous voice and his Page/Plant hair. Augmented by vintage organ, a loose-grooving rhythm section and back-alley, cig-smoking swagger, the video puts the right band in the right place, having a damn good time.

Moon Darling celebrates the release of By the Light of the Moon tomorrow, Jan. 25 at Fred Wildlife Refuge.