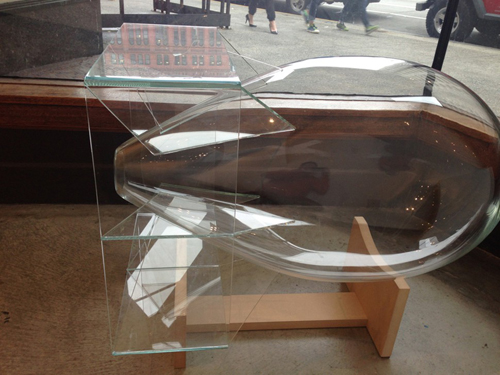 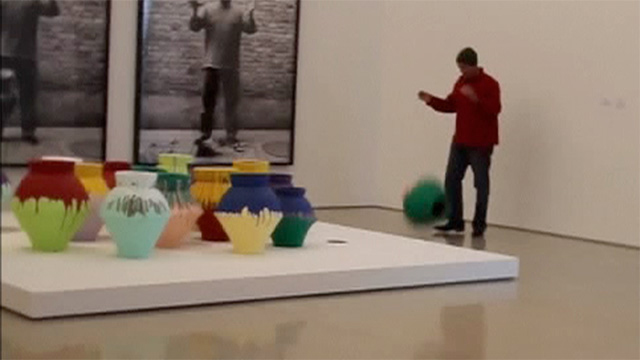 This week people were in the mood to smash things. Artist Maximo Caminero walked into Perez Art Museum Miami and smashed an Ai Weiwei vase valued at one million bucks. He claimed to be protesting the museum’s lack of local art.

Saturday afternoon, internationally-acclaimed video artist and local treasure Gary Hill decided it was a good idea to drop his own giant glass sculpture from 30 feet up, over the edge of the Rainier Oven Building. The sculpture was a replica of Fat Man, a glass simulacrum of the nuclear bomb dropped on Nagasaki in 1945. 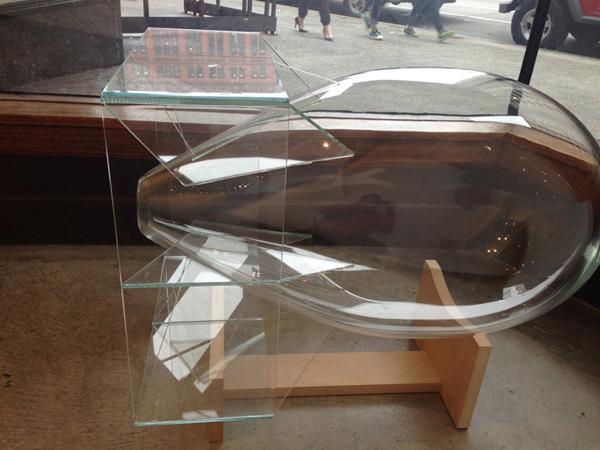 The drop connected to Hill’s show at James Harris Gallery, called Aloidia Piorm, which shows off work made during Hill’s recent residency at Pilchuck Glass School. Most Northwest artists make chandeliers, bric-a-brac, crack pipes and lumpy odes to the sexual sublime when hitting the glass factory, but Hill goes down a rabbit hole of synaesthetic, asemic wordplay: He collected 250 pieces of broken fragments and junk glass from Pilchuck’s scrap bin and bestowed them with nonsensical names. These are on view at James Harris, along with a handful of videos and the bombastic, bulbous Fat Man.

Dropping Fat Man from the Rainier Oven Building sounded boring. I didn’t go see it, nor did I think maybe two dozen art scenesters would give a shit about it.

I was wrong. More than a few other artists—mostly of Japanese descent—raised eyebrows at the unseemly location of the action (in the International District/Japantown). Almost no context was provided for Hill’s bomb drop, although press releases and announcements from the gallery circulated. Hill lived in Japan for a period; maybe that was a hook. Or maybe it’s oversensitive to get your panties in a twist over something like this. One artist—whose work sometimes addresses race—said it was silly, that people will leap at the chance to be offended by anything, even cartoony drawings of tits (he was talking about Ben Beres’ infamous Mamelles). Maybe Hill was being completely insensitive. Oops.

All this made me think back to 2011, when Serrah Russell smashed a table-full of glass at Hedreen Gallery in an installation/performance titled Glint of the Broken. Russell’s piece was inspired by some of the program directives offered by then-curators Whitney Ford-Terry and Jessica Powers: Intervention. Spontaneity. Adventure playgrounds. Field recording. Physical and social space that is both hopeful and enthusiastically disenchanting… 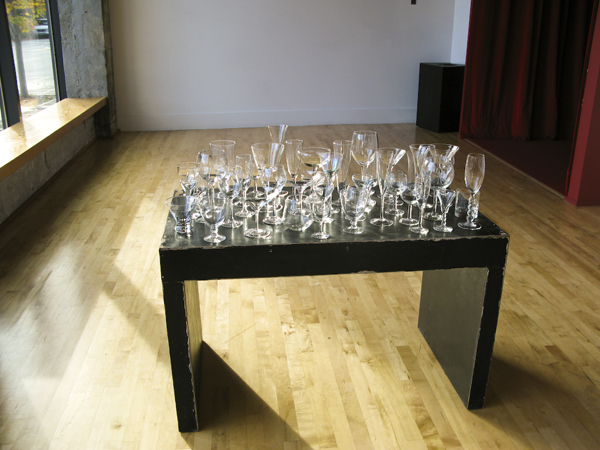 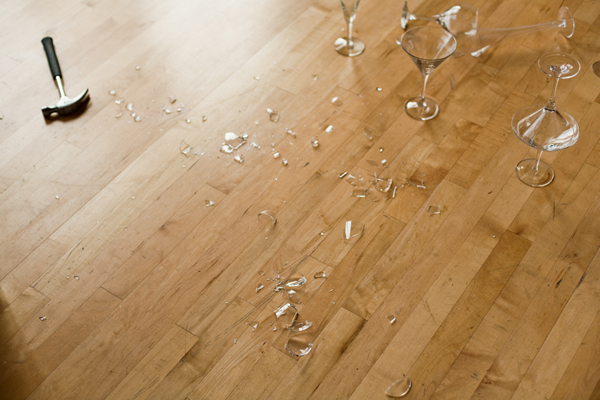 Russell describes her crash as a kind of communal playfulness. She relates it to building forts as a kid: “As in building a fort together, the doing, the making, the dreaming and fantasy are significant, not how the end product is utilized or purposed afterwards. I chose to facilitate an experience where participants would build together with the knowledge and intention that the construction would be destroyed together. Using drinking glasses, wine glasses, glass jars, we formed structures, towers, walls and then using hammers and stones we destroyed the structures, experiencing that exhilarating and terrifying sensation of broken glass. I believe there is a primal desire to break glass. The shattering sound it makes is beautiful and tragic, holding the potential for harm but also an opportunity for an expression of emotion, for a feeling of control.”

I shiver a little reading her writing. I’m surprised there isn’t actually more glass-smashing in our little Northwest glass wonderland.

Meanwhile, Touch Me: I Am Violent opened at Vermillion Thursday night. Yonnas T. Getahun curated themes of contact, confrontation and tactility quite literally; you were invited to interact with and touch the work. The opening was crammed. I could barely squeeze through a sea of wall-to-wall visitors. 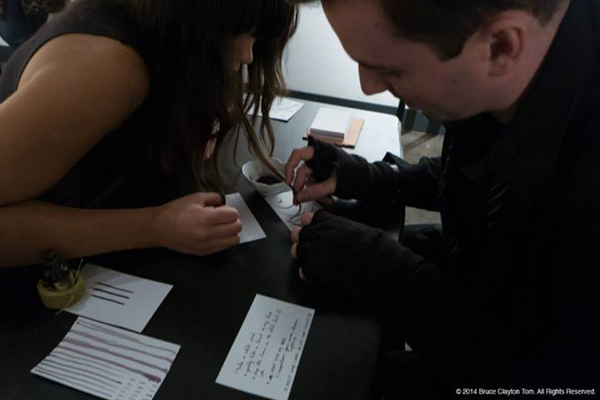 The show is a blockbuster brimming with ideas. Painter Crystal Barbre made an offering of one of her large paintings; she pinned it to the wall and instructed visitors to cut pieces from it to take away. Kat Larson sat in the middle of the stuffed gallery and let visitors use the ink-drenched ends of her hair to draw on paper scraps set on the tabletop between them. Greg Lundgren built a fuckable sculpture: a polyhedronal object with ridges and crevasses and one hole (low down, in an awkward, slightly-concealed location) that contained the guts of a Fleshlight. The piece is coated in a thin layer of ribbed latex. It swirls in little peaks, like frosting.

Around midnight, gallery goers—myself included—shuffled out of Vermillion just as an uproar at the front of the gallery caused all within earshot to gather near. It was a local musician. He was irate, yelling, ripping apart an installation by Daveda Russell. 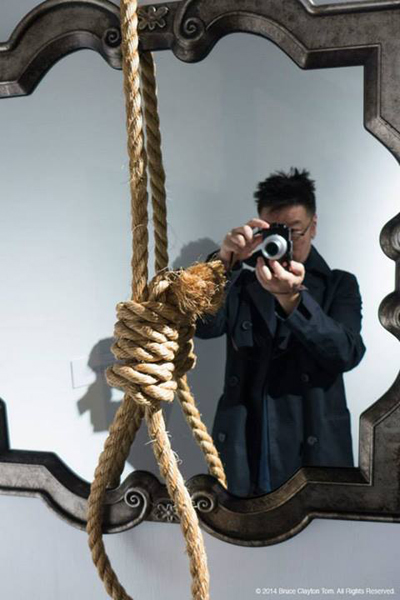 The piece is a white monolith. On one side, the names of 150 black women who had been murdered by lynching were written down. On the other side a noose and a mirror. Visitors were able to slip it on, see themselves reflected. It was touchy more than touching and worked some people up—said musician among them.

He tore the noose off the door and ran out, hurling it into the street. He tore down the mirror, screaming. A few turned their backs in disgust or embarrassment and left. “Too much. He lost me,” they muttered. But was it? The outburst felt cathartic, the cap to an exhausting evening.

I wrote earlier about the talking cure. In our city infamous for its freeziness, maybe we’re on the cusp of an era of brazen, hot-blooded overshare. Feelings. Vehement feelings. Smashing. Eyebrow-raising. Maybe Superbowl rioting is still in our blood, and maybe it’s a good thing.

Photos of work by Gary Hill and Serrah Russell courtesy of the artists; photos of Touch Me: I Am Violent by Bruce Clayton Tom.