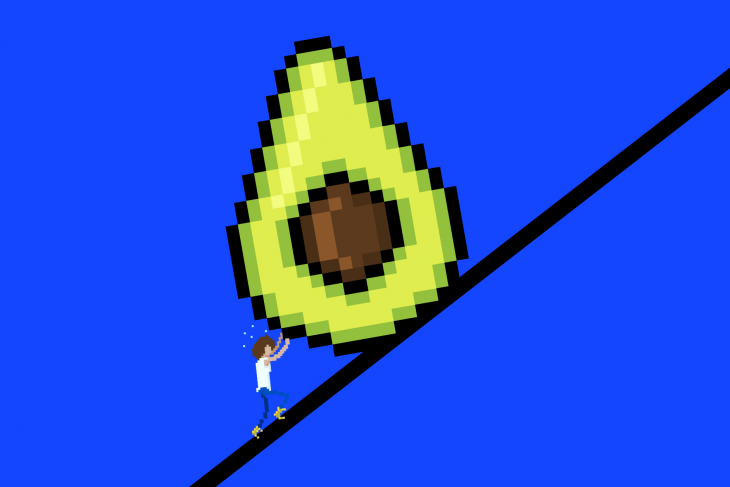 An image from Michael Hobbes' explosively popular Highline story, which was designed in collaboration with creative agency Gladeye.

When I started writing my book Millennials and the Moments That Made Us: A Cultural History of the U.S. from 1982-Present in late 2014, most of the contemporary writing about generational dynamics in America was devoid of serious analysis. Every now and again you’d spot an article about how members of the age cohort born in the mid-1980s weren’t getting married, buying cars or changing flat tires at the rate Americans used to, and some writers scribed business texts and TED Talks that described us as entitled and inept sources of cheap labor for major corporations.

To find a serious accounting of the structural and historical forces facing our generation, readers had to reach back to writers like Neil Howe and Anya Kamenetz; while these authors aren’t themselves Millennials, at least they provided some basis in fact and scholarly rigor for later writers to build on. Fortunately, times have changed, and in recent years a new crop of Millennial writers has stepped forward to reclaim the narrative surrounding our generation.

While “young people” and “the next generation” were vaguely credited for the ascendancy of Barack Obama in 2008 and 2012, it took the 2016 presidential election cycle for Millennials in specific to be named and invoked as an electoral force. In the last year, Millennial writers in outlets like Jacobin, The New Republic and The New York Times declared a generational referendum on the behavior of Baby Boomers, wishing that Millennials would rise from the ashes of late capitalist despair like some neoliberal phoenix clutching a program for political liberation.

Quietly—away from the East Coast power centers of dinner-party intellectualism—Seattle’s Millennials have contributed to this counternarrative with our own pragmatic focus on specific policy issues plaguing Millennials in our search to gain a foothold in increasingly unaffordable major cities. In the essays “But Seriously, Let’s Talk about Millennial Poverty” (2015) and “UGH WHY ARE MILLENNIALS SO ENTITLED” (2016), Seattle writer Hanna Brooks Olsen advanced the notion that declining wages and worker protections have far more to do with Millennial behavior than is widely presumed. The environmental nonprofit Forterra put on a panel featuring Olsen in early 2017; the evening’s conversation was centered around a report by EMC Research which found Millennials to be more environmentally-aware—and therefore less likely to drive—than previous generations.

Meanwhile, for much of the mid-2010s, Seattle writer Michael Hobbes was living in Denmark, studying the social democratic institutions of Scandinavia and subtly, without knowing it, having his political frame-of-reference tilted to the left. Upon returning to the United States, Hobbes—an old Millennial by virtue of being 35 years old—noticed how eager people over the age of 40 were to blame Millennials for their economic struggles. As a reaction, he began a research project about the Millennial condition that took nearly a year to complete.

The result of Hobbes’ herculean effort is an immaculately researched and impeccably designed spread in the boutique Huffington Post long-form site Highline. Titled “Generation Screwed,” Hobbes’ essay has made the rounds on social media, earning him a nonstop round of radio interviews and podcast appearances. I caught up with him at Victrola on Capitol Hill.

What sparked your interest in this topic?
I started writing about this because of conversations I had with people who are not Millennials. I often heard these individualized explanations about our entitlement, or our personal choices, or people who would say things to the effect of “you Millennials are poor because too many of you didn’t go into math and the sciences.” Nobody over 40 that I talked to was taking into account the changing structure of the economy; rising costs of housing, healthcare and education. So I wanted to write this article as a corrective for older people, and as a guidebook for younger people about why we should be more angry.

You’re a Millennial, right?
Technically! Although, barely. The classical definition of our generation is people born between 1982 and 2004. As a 35-year-old, when I think about the Millennial condition and what we inherited, I think of three paradigm shifts: Number one, the quality of jobs has diminished. Most jobs are likely to be temporary and seasonal positions. There’s less likely to be severance pay. The benefits accrued from work have eroded over time. Then you have number two, the fact that there are fewer social safety net benefits. And that’s coupled with number three, the concentration of highly skilled, high-paying jobs in cities that suffer from numbers one and two. So Millennials have this arrangement where you have to move that a city that will make you broke in order to have a chance at making money doing what you want.

I’ve recently read the books In Defense of Housing and Evicted, and you see a lot of what you’re talking about in those texts. How did you arrive at this paradigm for the piece you wrote?
Just talking to Millennials. One of the things that really stuck out to me was the commutes and the unavailability of public transportation for a lot of working Millennials in this country. A lot of people are paying so much money just for transportation: so when at least 30 percent of your income goes to rent and another 30 percent of your income goes towards maintaining an automobile, there’s not a lot left over. Additionally, longer transit times means less time to study, to do job training, to take care of kids. And I just heard constant stories about this condition compounding itself.

You talk a lot in your article about a specific aspect of this that I think has a lot of local resonance, and that’s the question of private property and home ownership, and the generational disparities that appear in a city where older homeowners have such a strong political bloc.
I think for Baby Boomers and homeowners there needs to be a reckoning with how their political decisions have made it harder for Millennials. When you talk to a lot of affluent older people, you hear a lot of versions of “I don’t want to make any sacrifices to make this a city that the average Millennials can afford to live in.” You have homeowners who have really benefitted from the rising cost of living here—who essentially won the lottery by buying homes for $150,000, and suddenly they’re worth a million dollars They’re benefitting from the rising cost of living by having increased property values, and—outside of paying property taxes—many still want renters to make most of the sacrifices.

What do you think the solution to this is?
I’m pessimistic about the country as a whole, but optimistic about Seattle. I think what we need to do is build a coalition for renters that is as strong as the coalition that homeowners have. Renters haven’t fully internalized that all of housing is political. I think if we can arrive at a unified platform about the kind of housing and tenants’ rights we need, Millennials will be in much better shape in cities like Seattle.

Shaun Scott’s Millennials and the Moments That Made Us launches at Rainier Arts Center on Saturday, Feb. 24.