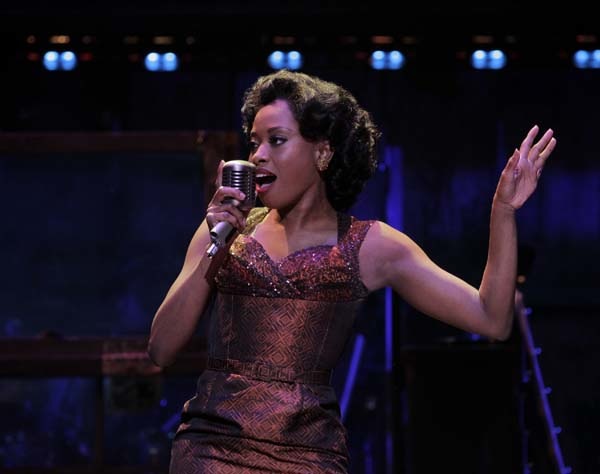 Memphis returns to Seattle, where the show had its pre-Broadway tryout in 2009, from a successful stint on Broadway, having scooped up four Tony awards during its run, including Best Musical. Like the musical Hairspray, which also got a pre-Broadway tryout in Seattle at the 5th Avenue and went on to win a number of Tonys, Memphis deals with race, sex, and rock ‘n’ roll. Though it takes a rather simplistic view of these complex complicated subjects, it’s nonetheless an enjoyable entertainment, largely due to the strength of its energetic cast.

The story is loosely based on the life of legendary Memphis DJ Dewey Phillips, who, as DJ “Daddy-O-Dewey” on Memphis station WHBQ, dazzled his listeners, both black and white, with a show that lovingly mixed together R&B platters and Dewey’s unhinged, non-stop patter (usually punctuated with a hearty “Dee-gaw! Tell ‘em Phillips sent you!”). In Memphis, Dewey has become Huey, a likeable schlub who loves R&B and who decides his calling is to bring the music to a hitherto untapped white audience. There’s the usual resistance from the whiter than white radio stations in town, with further complications arising when Huey also falls in love with aspiring R&B singer Felicia. Getting white folks to accept rock ‘n’ roll is one thing, but an interracial relationship really pushes the boundaries.

But in Memphis’ simplified world, there aren’t any real obstacles to overcome. Once the white population gets its shot of rhythm & blues, they’re mostly won over; even Huey’s curmudgeonly mom is testifyin’ by act two (it’s rather like having West Side Story’s Sharks and Jets deciding to settle their differences after listening to the same Chuck Berry record together). Opposition to Huey and Felicia’s affair is also largely brushed aside; a physical attack the two suffer has surprisingly few emotional aftershocks. And in an era when intimate relations between blacks and whites were not only illegal, Huey’s lack of understanding how controversial his relationship is comes across as decidedly naïve. Other issues are raised, but never resolved (by promoting it, is Huey stealing music from the African-American community?). And despite the changes the show experienced after its Seattle run, Memphis still suffers from a flat ending, when it turns out that Huey’s big dreams are just Memphis-sized; though he can see the future, he can’t make himself a part of it. Which seemingly leaves the character with nowhere to go. And all the yeah-but-you-started-the-whole-thing-Huey comments can’t keep the good spirits in the final number from feeling a bit deflated.

But Memphis is more about making you feel good than dwelling too hard on the issues. And this touring production boasts a cast with uniformly strong voices, from the leads to the secondary characters, who all throw themselves into each song as if bound and determined to help everyone in the audience get their groove on. Bryan Fenkart’s Huey is goofily good-natured, Felicia Boswell (as Felicia) is torchy and teasing in turn, while Julie Johnson, as Huey’s mother, nearly steals the show with her barnstorming number in act two, “Change Don’t Come Easy.” The show’s songs, by Joe DiPietro and Bon Jovi keyboardist David Bryan, are much like the show itself; a bit slick, but they go down easy.

As a basic primer of the dawning of the rock age, Memphis hits most of the right notes. It also underscores the fact that while we have made progress in the realm of race relations, we still have some way to go.

Memphis runs through Oct. 7 at the 5th Avenue Theatre. Pictured above: Felicia Boswell (Felicia) in the National Tour of MEMPHIS. Photo by Paul Kolnik.