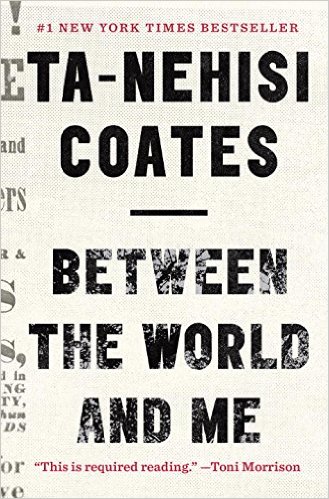 It isn’t enough to say that historians will “look back” on the 2010s as the beginnings of a new Civil Rights Movement. The urgent reality is that activists are recognizing it now. In the context of this new movement, Ta-Nehisi Coates has been lionized by The Observer as “the single best writer on the subject of race in the United States.” Toni Morrison called his new memoir Between The World and Me “required reading.” And a digitally reclusive Jay Z recently took to Twitter to urge America to read the book.

Coates’ reputation as a writer on the subject of race has benefitted greatly from this attention. But the 39-year-old journalist makes a point to re-tweet both sycophantic praise and vitriolic criticism of Between The World and Me, released in July on an imprint of Random House.

I think I wrote a great book.

Weighing in at a lean 175 pages, Between The World and Me proceeds from a familiar literary conceit—as a letter to Coates’ 15-year-old son, Samori. Some of the most touching passages are the ones where he recalls his road to self-discovery as a rapacious reader growing up in Baltimore and New York City. “If the Eighteenth Dynasty pharaohs were alive today,” he asks in an endearing flashback, “would they live in Harlem? I had to inhale all the pages.”

We grow to appreciate the narrator as a precocious youngster whose ambitions survived inner-city institutional breakdown. But the coming-of-age framing of Between The World and Me doesn’t quite allow us to see how Coates has expanded on views he arrived at as a younger man. Deep down, is he still the kid with a Walkman who thought listening to cassettes of Malcolm X speeches on the way to school was an insurgent act?

Because Coates addresses his son in Between The World and Me, the reader is treated to a glimpse of one of the least-represented relationships in American media: the one between a present black father and his son. As isthmuses of black achievement become ever more rare in an age of mass-incarceration, the book invites us to wonder how young Samori will forge the same community connections his father found among family, friends and lovers. Ta-Nehisi, meanwhile, can retreat into memories of his “Mecca”—the affectionate moniker he gives to his alma mater, Howard University.

“Perhaps we should return to ourselves,” he writes with a Baldwinian knack for beading together searing clauses on a rhetorical string. “Return to our own primordial streets, to our own ruggedness, to our own rude hair.” You can almost feel the author go out of his way to not mention that the founder and namesake of “The Mecca” was General Oliver Otis Howard—a white Civil War hero.

Writers on the subject of race popularly assert that there are “two Americas.” Coates takes that flourish leaps and bounds further, saying that the white experience he glimpsed on ’80s TV exists on a different side of the galaxy, “beyond the firmament, past the asteroid belt.” When he muses that white Americans live a dream that “smells like mint and tastes like strawberry shortcake,” he reveals that the gulf between the races in America has as much to do with politicized misperception as it does with institutional racism. Coates has a way of capturing the color divide with wrenching accuracy, but he often does so by advancing the illusion that citizens of the same country have separate destinies.

In Between The World and Me, Coates recoils from offering solutions for collapsing America’s color divide. He’s adamant that aspiring writers follow in his path. “My hope,” he announced on Twitter to nobody in particular, “is that young writers will ignore every editor who insists they have impact or actionable solutions.” Yet the author has proposed that America pay blacks reparations for slavery and segregation. His jeremiads about racial justice combine heartbreaking historical exposition with the bleak religiosity of a jilted prophet. What does it say that the one solution he’s advocated has as much of a chance at being realized as the Pacific Northwest does of seceding from the United States?

On Oct. 29, Coates comes to Seattle—a famously literate city where mostly white audiences are used to staying silent while writers pummel the powers that be with paper sledgehammers. As an author who has said that he’s surprised when whites respond positively to his work, Coates is in for a surprise: Seattle’s culture doesn’t stifle radical solutions—it entertains them, on the way to turning them into entertainment.

Perhaps one of the most valuable silos in late capitalism is the one where shrill outrage is stored and tapped into; it allows the animal farm to appear tolerant of trumpeted grudges that pass for progress. Suffering becomes spectacle, and the resulting cynicism-industrial-complex eliminates all incentive to engage in problem-solving. Meanwhile, nostalgia for yesteryear—for Malcolm, for Nelson, for Steve Biko—further licenses a sense that the future isn’t worth fighting for.

Lovers of literature should be worried by this state of affairs. Resignation makes brilliant minds weaker writers. Why offer jargon-free explanations WITH CAPS LOCK TURNED OFF when you believe the society you address yourself to lacks the capacity to change?

To his credit, Coates’ elevated prose steers clear of the pitfalls of the average Internet yell piece. His aesthetic never allows him to play to “the prejudices of the mob” he fears so much. But he may be doing something equally counterproductive: validating us for sitting at home, brushing up on our Mobb Deep and our Shakespeare, and mistaking it for meaningful engagement.

Shakespeare binge has me lamenting a depressing aspect of writing these days-the constant search for solutionism.

My intellectual influences are, largely but not totally, historians. They’re not exactly the most hopeful bunch either.

Involvement hurts. One can only march for so long before joints begin to ache under the weight of problems facing the body politic. Cynicism shows up as a preemptive salve against this pain: pushing far-fetched “solutions” like reparations allows one to sidestep the disappointment of consensus building. Ta-Nehisi Coates has described Between The World and Me as his attempt at showing racism’s visceral effects on the black body. But while he proudly declines to offer solutions, Millennial Republicans like Kristen Soltis Anderson are writing bestsellers that rally the next generation of segregationists to win elections. Anyone in search of a way out would do better to pay close attention to the forthcoming platform from the Black Lives Matter movement. Say what you will about the aggressive tactics, but beneath our radicalism lays a fundamental trust that the American social contract can be re-written to respond to progressive demands.

Coates renders his version of the Black experience beautifully. But human bodies play by a different book of rules than political ones. Between The World and Me is a superb book that falls short of promises it doesn’t have the good faith to make.