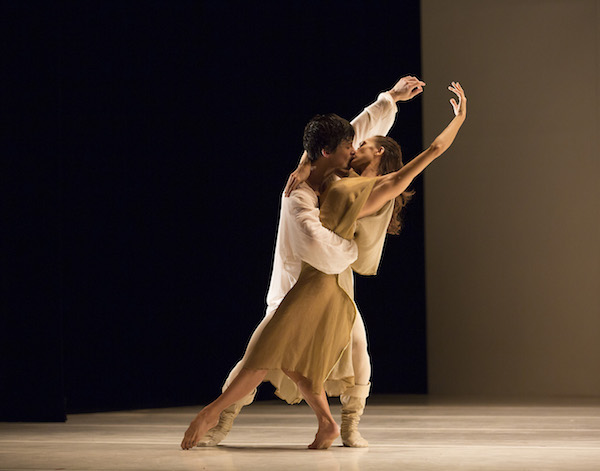 Romeo and Juliet. Whether you were forced to read it in high school, or swooned along as Leonardo DiCaprio and Claire Danes shared that famous swimming pool kiss in Baz Luhrmann’s 1996 film adaptation, nearly everyone knows the basic premise of Shakespeare’s legendary play. Star-crossed lovers from two enemy families fall in love—and the results are disastrous for everyone involved. It’s no different in Pacific Northwest Ballet’s Roméo et Juliette, now running at McCaw Hall, but this is a lighter version, softer around the edges in its intent, focusing more on the emotional developments and ties of the characters and eschewing the traditional bloody familial war. But that’s not to say it’s all innocence and good intentions—too much saccharine and things start to rot.

Originally choreographed by Jean-Christophe Maillot for Les Ballets de Monte-Carlo in 1996, this production of Roméo et Juliette is rich with palpable, chilling emotion, from the giddy joy of young love to the distraught rage of a mother losing her child. Set to Sergei Prokofiev’s classic score from the mid-‘30s, the choreography is fragmented and modern with underpinnings of classical language, full of angular movement and sharp shapes, and moments when it feels like you’re watching a midcentury cubist painting momentarily come to life.

While this is a more PG production than most (no dramatic sword deaths, no overtly sexual trysts, no visible poison and little conspicuous violence), it is no less engaging. The deep level of emotional output and theatrical performance from the dancers (although admittedly bordering on too much at times), in addition to the abstract choreography, is enough to hold the show without the full set of original drama.

Opening night’s ill-fated Romeo (James Moore) and Juliet (Noelani Pantastico) were a good match visually (they are both shorter, muscular dancers) and in movement. His enthusiasm and her mild yet coquettish responses created a dynamic push and pull interaction between them. Pantastico is a standout—her presence on stage, her grace and her mastery of technique at times reaching the level of former stunning principal Carla Körbes (a gold standard, still lingering in the minds of some PNB fans). Lady Capulet (Laura Tisserand) is a force—in her slinky, black, slit-up-to-the-thigh dress she commands every scene she’s in, her long limbs thrown impossibly high, her manic energy declaring she is not one to cross.

The most intriguing, and in my opinion the true dark horse of the night, was Friar Laurence (danced by the lanky Miles Pertl). Unlike traditional interpretations of the story, the Friar here is young and attractive, almost sexy (my Catholic great-grandmother is rolling in her grave). He is the first character we see on stage, starting the ballet with a dramatic throw of the arms (one straight up, one out to the side). The story seems to be told through his eyes—a tortured man looking back on a tragedy he helped create. Slinking around the set, gliding in and out of various scenes, throwing himself against the wall, he is subtle yet bold presence, a chilly reminder of the inescapable fate that each of the characters (and we, ourselves) face. His dancing is mesmerizing, and he holds an almost unexplainable emotional pull. Flanked by his acolytes (Kyle Davis and Price Suddarth) the Friar appears to be constantly in limbo, existing in a state between good and evil.

The set (Ernest Pignon-Ernest) is simple, all white and beautifully architectural, two large white panels and a ramp that moves to become the famous balcony, a bed, or the Capulet family mausoleum. Dominique Drillot’s lighting bolsters the various emotions of the scenes—bright and warm for the masquerade party, cool with bluish tones in the crypt.

While the choreography is a refreshing step away from straight classical ballet, there is not a lot of intricately challenging footwork or phrasing. Sometimes the dancers overact in a cheesy display, and the Punch and Judy show in Act Two features some horrifying puppets. But there is something about the story with lasting appeal. It’s a classic, and more than 400 years after it was written, despite knowing how it all ends, we’re still rooting for that true, everlasting love.