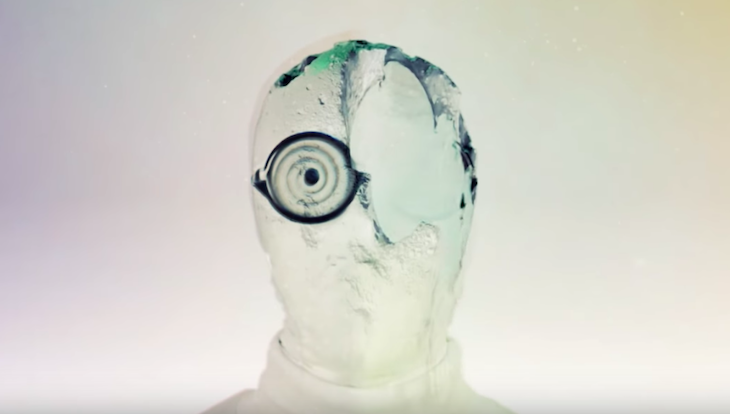 You’re doing something right when a science project for children translates to a supremely strange, hilariously spot-on music video for your psych-rock band.

The anonymous weirdo known as Shit Ghost has been tweaking Seattle audiences for a couple years now, performing in a white Spandex mask, white turtleneck and Archie McPhee costume glasses while stretching time—and his vocals—like saltwater taffy in ten-minute-long, ambient rock excursions. Like his on-stage persona, Shit Ghost’s music is both soothing and discomforting, gentle and gently maddening. You won’t notice you’re being lulled into a dissociative fever dream until you’re already there, and by then it’s too late, and you’re fine with it.

Today we’re premiering the video for a new Shit Ghost single called “Melt Your Brain.” Perhaps because it’s produced by Erik Blood, the song is remarkably concise, even catchy—a good entry point for Shit Ghost neophytes. The video, which SG directed himself, is literal: It features various styrofoam heads liquifying and melting under acetone, a foamy, gloppy and probably terrible-smelling reaction SG says he first noted while working with kids. (Yes, a man who goes by Shit Ghost once worked with kids.) It’s all rather bizarre and beautiful.

Says Ghost, “We use our music to encourage people to explore the unknown parts of the human mind. We strive to give something new to the world, whether that be a new way to see a color or a new color for the world to see. We made this video to show that everything is fleeting. Your emotions, your ideas, your creations will all inevitably melt back into the cosmos.”