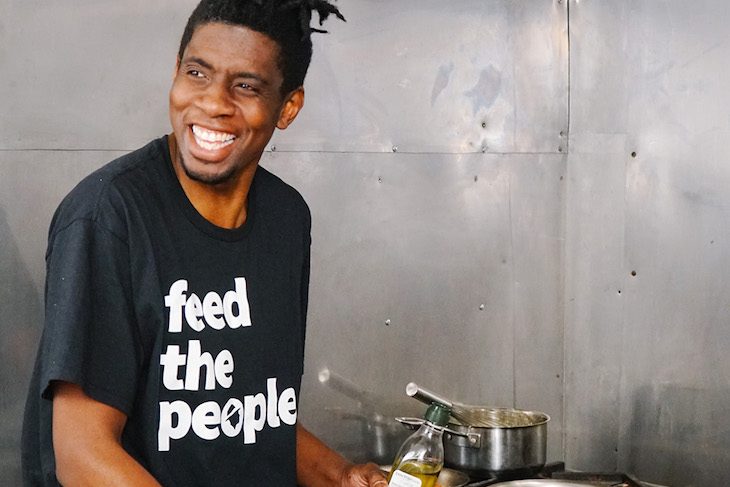 The words FEED THE PEOPLE are a common-sense directive, a mantra and a movement—and they make a damn good T-shirt. Spend any time in Seattle’s South End and you’re bound to see someone wearing one. And though Tarik Abduallah didn’t coin the phrase himself, it expresses his primary motivation. His brand, if you will. And Abduallah, a charismatic chef, educator and activist—and recipient of a 2018 Mayor’s Arts Award—certainly will feed the people.

“The slogan itself came from someone that came up to me and was like, ‘Yo T, you’re always feeding the people!’ I was like, ‘Yeah bro that’s what we do for a living,’” Abdullah says. “But what that person was saying was that from a community standpoint, I’m always feeding the people. I never looked at it in that way but I stuck with it after that.”

Abdullah is speaking to me from outside the Station Café in Beacon Hill. He occasionally dips out of our conversation to say hi to friends passing by. With a wide, radiant smile and dapper mode of dress—often including leather items he fashions himself—the man is beyond recognizable; he’s magnetic. If the South End has a celebrity chef, it’s Tarik Abdullah.

“I also want people to understand that it’s not just about food,” he continues. “I want people to see the shirt and not see me but see yourself: How am I feeding the people? It could be through medicine, through words, through some form of healing.”

Abdullah’s been feeding the people all over town for a long time. Over the last seven years he’s held weeklong summer cooking classes called In the Kitchen with Chef T at both Coyote Central in the Central District and at the Hillman City Collaboratory or the Ethiopian Community in Seattle. The program introduces neighborhood kids ages 11–14 to the joy and satisfaction Abdullah’s found in his 20-year professional cooking career.

“The goal is to introduce kids to what it’s like to be in my world,” he says. “I teach different levels of cooking, some as simple as making breads to fermenting, pickling, introducing them to new flavors. It allows them to be creative on their own. As long as I show them the ropes, from there it’s a matter of them coming up with something and owning it. Like, ‘I made that!’ They show it off to their parents and then they’re like, ‘Mom, I need a KitchenAid!’”

Since 2010, Abdullah has produced several series of popup restaurants across the city. A DJ and a Chef was his first, a series of high-end, prix fixe dinners; now he runs it solo, without the DJ, who moved to LA. A few years ago Abdullah’s Morning Star Café served delicious brunch at entry-level prices and his ongoing Midnight Mecca series stages themed dinners, often partnered with friends and colleagues from the food and farming communities of the Northwest, at different locations around Seattle. Each of these concepts emphasized Abdullah’s impeccable way with the spices and techniques North Africa and the Mediterranean, regions of the globe he visits often and cherishes deeply.

If Abdullah reps the North African and Middle Eastern flavors of his family history on the plate, he’s all Seattle on the screen. In 2015 he appeared as a contestant on ABC’s The Taste, making it to the semifinals as part of Anthony Bourdain’s team before being cut (Abdullah says they never aired the interview in which he wore his Seattle-made Black Weirdo T-shirt). That same year he hosted Vice TV’s Munchies Guide to Washington, taking viewers across the state’s culinary ecosystem in five episodes, and last year he partnered with the Seattle-based Foodways Project to bring greater attention to chefs and restaurateurs of color in the Puget Sound area. Most recently he cooked alongside his friends Shabazz Palaces in a Revolt TV episode of Turning Tables. And it’s not just Abdullah who’s taken with TV; one of his In the Kitchen students competed on the Food Network’s Kids Baking Championship.

The Revolt TV appearance was filmed inside Black & Tan Hall, the restaurant, bar, performance venue and social club in Hillman City that represents Abdullah’s most ambitious endeavor to date. He’s been laboring on the place with partners Ben Hunter and Rodney Herold since 2016, rebuilding the entire interior and kitchen from scratch as well as finding funding for the required renovations. The place operates as a worker-owned co-op, a unique, meaningful project that’s only grown more meaningful as Seattle struggles to maintain independent, community-based spaces. The Black & Tan recently won a $350,000 grant from the Seattle Office of Planning & Community Development that will go toward finishing the building itself—foundation, kitchen, balcony, fire sprinklers.

Abdullah isn’t ready to offer a timeline for the completion of the Black and Tan. Instead he poses it in his typical, day-by-day fashion.

“We’re getting there,” he says. “In the meantime I’m focusing on what I’ve been doing, and balancing that out with self-care and family time. Keep being that community guy.”