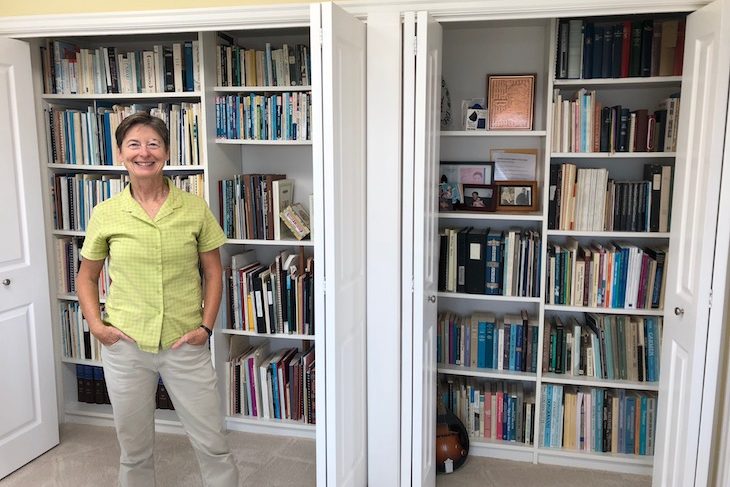 Karen P. Thomas in front of her music library. Photo by Maggie Molloy

Karen P. Thomas believes everybody should be able to sing, and every voice deserves to be heard. “Music is such a quick way for people who don’t know each other to connect,” she says. “It’s kind of magic.” For the past 30 years, Thomas has endeavored to share that magic with as many people as possible through her work as the artistic director of Seattle Pro Musica, bringing together singers from all walks of life to perform music by composers from around the globe.

During her tenure, Thomas has diversified concert programming, made Seattle Pro Musica fully welcoming for LGBTQ singers and helped improve accessibility for youth and low-income residents of the greater Seattle area. She’s also recorded 11 Seattle Pro Musica albums and had the choir sing in 48 different languages (and counting). Along the way she’s cultivated an enormous music library, a dedicated community of choral singers and a remarkable collection of accolades, including, now, a 2018 Mayor’s Arts Award.

Thomas, a Seattle native, didn’t plan to be a choral conductor. As a kid she played classical guitar, then went on to study composition at Cornish College of the Arts. Her music was rhythmically complex enough that it required a conductor, so she picked up the baton. “I started learning how to conduct and I fell in love with it,” she says. “Composition is very lonely, and conducting is very social. I liked having that more social aspect.”

She continued her studies in composition and conducting at the University of Washington and was hired to conduct Seattle Pro Musica fresh out of grad school. In 1987, the choir had only 18 singers.

“There was no office, I was part-time and I did everything,” she says with a laugh. “I laid out the programs, I designed the posters, I went to the printer.”

Seattle Pro Musica has since expanded to 80 singers and four performing ensembles, including the full choir, a mixed chamber choir and smaller soprano-alto and tenor-bass choirs. The organization has also grown tremendously in terms of musical ability: Within the past few years, they’ve performed masterworks ranging from Bach’s sacred Mass in B minor to David Lang’s Pulitzer Prize-winning Little Match Girl Passion. They’ve also joined the Seattle Symphony on performances such as Britten’s War Requiem and Berlioz’s Grande Messe des morts.

Thomas’s programming goes beyond the famous names in classical music to feature composers from across history and around the world. She places a strong emphasis on highlighting women composers, living composers and composers of color—groups which have historically been excluded from classical concert programs. During any given season Seattle Pro Musica audiences will hear music ranging from the medieval chants of Hildegard von Bingen to the Korean folk-inspired songs of Hyo-Won Woo, and the choir has performed many of Thomas’s own compositions as well. Of course, singing choral music from other parts of the world requires singing in many different languages and vocal styles.

“Most classically-trained singers are used to having to sing in Latin, German, Italian, French, Spanish and maybe Russian,” Thomas says. Her singers have performed in languages such as Mongolian, Mandarin Chinese, Japanese, Korean, Arabic, Welsh, Icelandic, Hausa, Quechua and Nahuatl, to name just a few. Some pieces require extra help from a language coach or a native speaker. It takes longer to learn, but Thomas says it’s worth it to perform the music as the composer intended.

“The sound of a language is so important to a piece of music, and so unique,” she says. “It colors everything—the consonants, the vowels, the timbre.”

Diversity and inclusion are central not only to the repertoire but also to the culture of Seattle Pro Musica. In particular, Thomas works to make the choir welcoming for trans and non-binary singers. Traditional choral practices often divide singers into gendered categories: In performance women wear dresses and men wear tuxedos, sopranos and altos are the “women’s” choir, while tenors and basses are the “men’s.” In Seattle Pro Musica, Thomas calls them “soprano-alto” and “tenor-bass” choirs, and for performances, they can dress in any formal black attire they choose.

“If there’s just one person out there who feels comfortable being in Seattle Pro Musica because of the language that we use and the way we allow our singers to dress, that’s super important,” Thomas says. “I don’t want to exclude that one singer.”

As a board member of Chorus America, Thomas also works on a national level to provide resources for high school and college conductors who may have students going through gender transition and vocal change in their classes. Choirs have the unique ability to transform a wide range of individual voices into a powerful expression of community—and for Thomas, it’s critical that each voice feels welcome.

“It’s very vulnerable to sing,” Thomas says. “When you’re in a community of people who are opening themselves up like that, it’s a huge force for good in the world.”