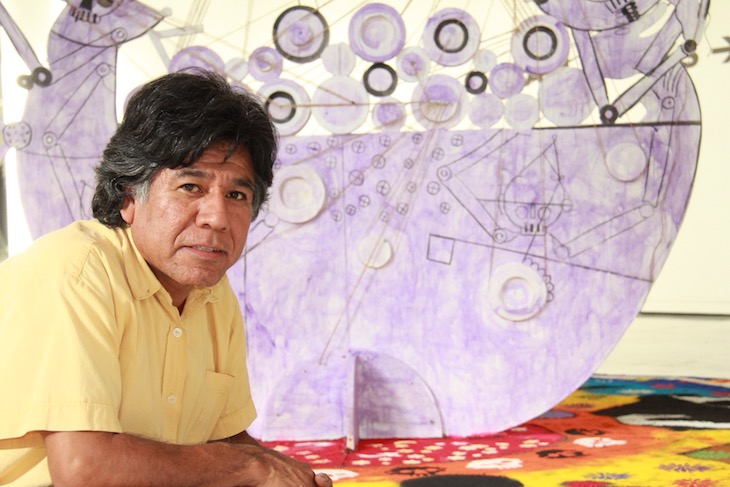 “Sometimes I worry that I’m not spending enough time in my studio, that I should be painting more,” Fulgencio Lazo says. He repeats this sentiment multiple times during our conversation on an August afternoon shortly after learning that he’ll receive a Mayor’s Arts Award this Thursday.

Lazo’s extensive practice as a visual artist encompasses so much more than the production of paintings. Over the past 20 years he’s played a significant role in connecting Seattle with Latinx cultural tradition. Born and raised in Oaxaca, Mexico, he arrived to Seattle in 1989 after being awarded a scholarship to study lithography for a year at Cornish College of the Arts. While there, Lazo met the woman who would become his wife, a relationship that he says “changed everything.” After his stint at Cornish he settled in Seattle to start a family.

Since then, Lazo has extensively exhibited his work—primarily acrylic paintings on canvas—in more than 50 solo shows in the United States, Mexico and Japan; he’s represented by a number of galleries internationally. His large-scale paintings are bold, his imagery a tangle of figures trapped in prismatic webs of colors, emerging from surfaces that scintillate like stained glass. His colors run hot, in smoldering reds and golds. Even his cool palette seems to radiate restless heat, the blue of an incandescent flame.

Though beautiful, decorative even, his work exudes a tension that strains between pretty and political. The pictures unfold narratives of constant movement, metaphoric and otherwise, gently alluding to subjects like immigration.

“I’m trying to express what we have in our [Latinx] culture: the music, food, the people, to celebrate that,” Lazo says. “But also to consider some of the problems we have in that same culture. We have a lot of good, but some needs to change.”

Lazo manifests this change on his canvases, conjuring transformation of his culture, both Oaxacan—he returns to Oaxaca each summer to raise his children immersed in the language and tradition of home—and American.

“I started painting a lot of these representations of women because among the Indigenous people of Oaxaca, up in the mountains, there’s not much opportunity or rights for women. They don’t get to play music. In general the dancers are only men. So instead I put only women in my pieces. The instruments are in their hands.”

Lazo sells much more of his work in Mexico than Seattle—nearly an 80/20 split. But his work in the U.S. has expanded well beyond the picture plane.

“The more I worked in the arts, I started to see the people and art there as separate. Many people are afraid to enter a gallery or museum, or for some reason don’t have a connection with art. I started to worry about that. I had to work out how my art is going to be closer to the community. So I started organizing.”

Over the last 20 years, Lazo co-founded the annual Oaxacan celebration Guelaguetza as well as International Children’s Day, which offers an array of free workshops, performances, classes and Day of the Dead events at venues such as Seattle Art Museum. Everything is always free of charge. Art, he says, should be accessible.

When he relocated his painting studio from his home to a much larger space a few years ago, he determined it was too large to “waste” on himself, so he opened its doors to the community. At Studio Lazo he brings together artists from across Seattle and of all backgrounds—though Lazo makes a point to showcase work of Latino artists, writers and musicians.

“Always start with the people within the community,” he says. “I always tell my people, how do we make our community open, how do make it welcome? Everybody is welcome.”