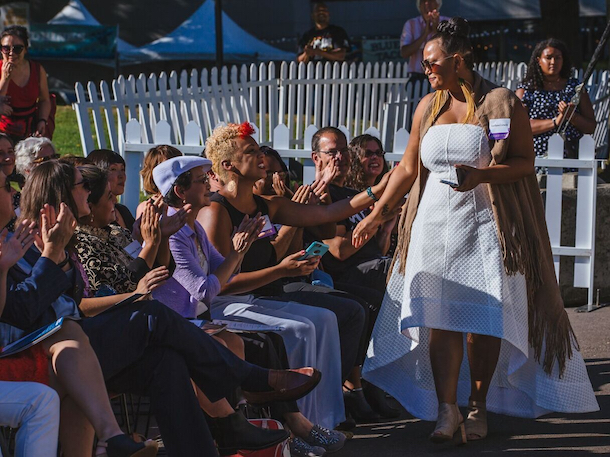 Leilani Lewis walks to the stage to accept her Mayor's Arts Award on Aug. 31, 2017. Photo by Sunita Martini.

Leilani Lewis doesn’t really remember the artist talks she went to with her arts-loving mom at the Detroit Institute of Arts; she was a rambunctious kid who couldn’t sit still and preferred to run around. What she does recall from those visits is the feeling of safety and welcome she experienced around the artworks, the sense of community that those events radiated and the diversity they reflected.

“I remember people gathering around art and, even more distinctly, I remember seeing more representations of people that looked like me,” she says. “Being from Seattle and moving to Detroit when I was young, that was when I first had real exposure to a lot of representation of blackness and black people, black parents and black identity, so it all kind of culminated at the same time.”

It would take her a while—“It’s been a windy road toward doing the work,” Lewis says—but cultivating that intersection of art and community eventually became a vocation and avocation for Lewis, who last week earned the Mayor’s Arts Award for an Emerging Leader in the Field. Today she is a driving force for collaboration in the Seattle arts community as well as a curator and an artists’ champion—an essential part of a creative ecosystem that is notoriously hard to recognize. She currently works with the Race & Equity Initiative at the University of Washington. 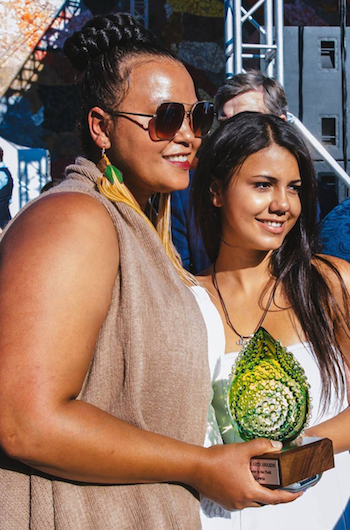 After returning to Seattle as a teenager, she says, no one expected much from her. “I left high school and got my GED,” she says. “I worked jobs. I left home very young, got married at 20, had my daughter.” Eventually, she went back to school, first to community college then to Seattle University, taking art history classes and some studio art classes. “I got that feeling again from when I was a kid, I felt comfortable in that space,” she says. “So, it started out there.”

After school, she hooked up with the Northwest African American Museum shortly before it opened in 2008. Very green, she started as a volunteer before getting hired to do development work. “It was all very loose, start-up nonprofit museum-y,” Lewis says. But she was learning from experts in the field, including Brian Carter, Barbara Earl Thomas and Sandra Jackson-Dumont, who would become her mentors and champions.

What did she learn? “You can be independent in a lot of other places but to make things happen here you have to work with people,” Lewis says. “Building those relationships is critical, and if you engage with African American history or art—or any kind of art—you have to think about people. You have to think about how it’s going to land and who’s going to engage with it. You have to treat people well and draw people in. If institutions in this community value the people, so the people will in turn value the institutions. Once I really internalized that, I was able to do a lot of things at the museum that I’m very proud of.”

Particular points of pride during her time at NAAM include a wildly successful Afropunk party, held in conjunction with an exhibit called Afros: A Celebration of Natural Hair, and popular PechaKucha programs on AfroFuturism, #Ferguson and Black Lives Matter, that last of which was in such high demand it had to be moved to Mount Zion Baptist Church.

Since starting on her path, Lewis has always choosen challenging projects to force herself to learn new things. She once walked into the now-closed U District jazz club Lucid Lounge and told the owner, “You need art on the walls,” even though she didn’t yet know quite how to hang art. Lucid Gallery was born from that moment, with Lewis as its curator. Now, in addition to her work at UW, she serves on the board of arts services nonprofit Shunpike, is dipping a toe into podcasting and is curating a fall exhibit for NAAM with C. Davida Ingram.

“I like collaborating and making things—that’s my creative practice,” Lewis says. “I’m not an artist in the traditional sense but I’m definitely an idea person, bursting with things that have to get done.” For her, centering artists’ practice (and making sure they get paid) is both a pathway to a better understanding of our lives and a way to facilitate connection to others, to help people better understand people.

“I don’t want to sound Pollyanna about it,” she says. “Things are really hard right now for artists, and especially for artists of color, black, brown, Latinx, gay, lesbian, trans—all artists who are in the minority are grappling with a lot of economic disadvantage in this city. But at the same time, we’re the soul of the city, and my hope is that people recognize that. Having Seattle be an open, accepting, unique and loving city is to everyone’s advantage and artists are the ones that teach us how to do that. They’re the visionaries.”