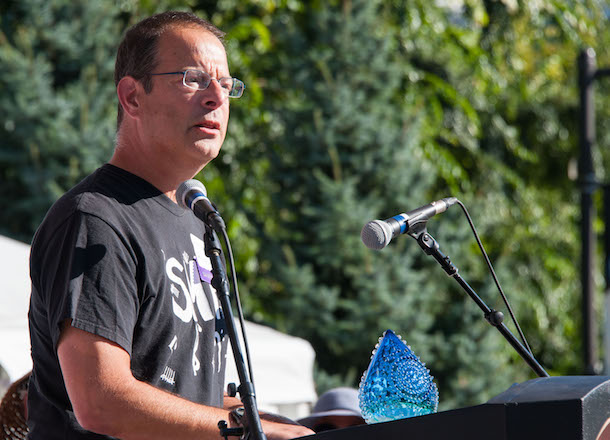 Seattle Music Partners is a cultural conduit that ushers youth into the community of musicians. They provide free musical instruments and instruction to students at low-income elementary schools in the Central District and continue that education through middle school with field trips and group performance opportunities. When students reach high school, they can volunteer to mentor a budding musician of their own. It’s a years-long cycle that begins with a child’s earliest contact with music making. Last week, SMP received the Mayor’s Arts Award for Cultural Ambassador – Organization.

“Most of the students have never played an instrument, never made that first sound,” says SMP executive director Scott Gelband, who accepted the award on behalf of SMP. “We start with the moment they first open up the case and take the instrument out.”

Founded in 2000, SMP started as a grass roots organization to address the keen disparity between students whose parents can afford private lessons and those who can’t. The former are far more likely to end up in award-winning local secondary school bands and orchestras, while the latter lack the head start that would propel them to perform at that level. In its first seven years, SMP paired Garfield High mentors with Leschi Elementary students, averaging 30 students a year.

Now SMP operates in four different Title I schools in the Central District and draws around 100 volunteer mentors from local high schools and colleges. They’ve doubled instructional sessions to twice weekly, developed their own curriculum and assessments to map student progress, and launched a summer program.

The most noteworthy element of this entire multigenerational music-making endeavor is that everything is provided at no cost to the student, from instruments and equipment to field trips and transportation. SMP has effectively removed all barriers of entry into the community of musicians for over 100 elementary school students and 30 middle school students in the center of a rapidly gentrifying and increasingly inequitable city. To do this, SMP relies entirely on community support in the form of volunteer mentors, operating capital and donated musical instruments. This includes funds to buy additional instruments, Gelband quips, “when everyone clamors for trombones one year.”

Meaghan Leferink has been with SMP since 2012, working her way up from program coordinator and program director to director of community engagement. She’s passionate about the connections created between young students and their mentors.

“I believe in the idea of ‘if you see it, you can be it.’ Our mentors are an example of what our students can do when they’re older,” Leferink says. “Our mentors don’t just talk about music; they talk about what they’re doing academically, how they’ve persisted as a musician, how they’ve tackled hard pieces they’ve encountered. Having a role model who’s gone through the same sorts of things is really important.”

Gelband and Leferink agree that the most satisfying part of fulfilling SMP’s mission is watching their fledgling musicians grow into accomplished performers and mentors themselves. Last year Leferink witnessed her first class of students advance to high school, thus becoming eligible to teach in the program.

“I finally got to see that continuum take hold, where students I taught as fifth graders became mentors to their own fifth graders. A kid I taught flute when she was 11 years old is now teaching her own student. That’s super rewarding to see.”