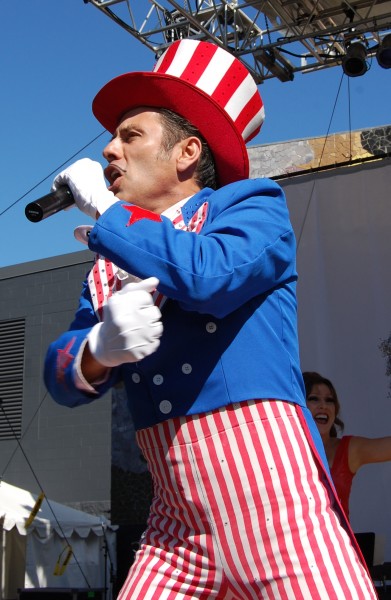 Outside the Elvistravaganza exhibit at this year’s Bumbershoot, a woman was overheard explaining why her friend, an African-American, wouldn’t go inside. “She said, ‘I couldn’t possibly! After all, he stole our music!’” It’s not the sentiment that’s so surprising (Elvis was often erroneously accused of cultural theft), but the timing; who would’ve thought, 35 years after his death, Elvis would still be provoking such outrage in the 21st century? After all, the pelvic gyrations that incensed the self-appointed guardians of America’s “family values” wouldn’t lift an eyebrow in today’s hyper-sexualized world. And by the end of his life, his career was in the midst of a slow fade; no longer an innovative force in music, he still attracted the faithful to his shows, but generated barely a flicker of interest in the outside world.

All that changed with his death at age 42 on Aug. 16, 1977 of course. In one of the countless obituaries that appeared in the weeks after Elvis died, rock critic Lester Bangs famously wrote, “We will never agree on anything the way we agreed on Elvis.” But he was wrong. From the moment he emerged, people have been debating the meaning of Elvis, and the debate was only heightened after his demise. We might not agree about anything on Elvis, but we sure can’t stop talking about him.

This was the true underlying meaning of the Elvistravaganza exhibit at this year’s Bumbershoot festival, with the entire Seattle Center Pavilion building given over to visual depictions of the King. Marlow Harris, who curated the exhibit with her husband Jo David, describes Elvis as a tabula rasa — the kind of blank slate you can project anything onto. “He’s the epitome of everything,” she says, delighting in the chance to show off her own collection of Elvis ephemera as part of the exhibit, explaining, “This show is a culmination of an entire lifetime’s work!” Marlow’s collection, on display in a makeshift bedroom set up, spotlighted the consumer kitsch side of Elvis: Elvis pillows, Elvis lamps, Elvis bedspread, Elvis clocks, Elvis wall hangings, Elvis Pez dispenser. Elvis As Product.

There was a Seattle tie-in with the exhibit, as this year marks the 50th anniversary of the filming of It Happened at the World’s Fair (released in 1963), a distinctly unmemorable Elvis movie that used the Seattle World’s Fair as its setting. That provided a natural jumping point for one than one artist in the exhibit, with artist Pat Moriarity readily acknowledging the film’s inspiration for his illustration of a somewhat dazed looking Elvis in a space helmet. A number of pieces reflected the Elvis in space/as an alien theme, such as Jo David’s “Elvatar,” casting Elvis as one of the blue-skinned Na’vi from James Cameron’s film, and David C. Kane’s “Elvish,” with Elvis as a green, pointy-eared elf. He was also juxtaposed with the Space Needle in various pieces, most cleverly in Art Garcia’s triptych, “Elvis, Phallus, Pelvis,” which riffed on Alfred Wertheimer’s famous shot of a ‘50s Elvis playfully touching tongues with a female fan backstage: the first illustration was a colorized version of Wertheimer’s shot; the second replaced the young woman with a pair of Space Needles; and the third replaced her with a skeletal pelvic bone.

Many pieces referenced Elvis’ status as an icon. Both the pop icon — whose excesses were vividly captured in Chris N. Bradley’s display of oversized pills, emblazoned with the words “Thank you. Thank you very much” — and the religious icon. Perhaps because he was nicknamed “the King,” Elvis is show in religious settings more than any other rock star, in this exhibit most startlingly in Crystal Barbre’s “Pieta,” with a crucified, bloodstained King swooning in his mother’s arms. And Kelly Lyles’ “Holy Family” pictured a baby, jumpsuit-clad Elvis between the sacred and the profane: his beloved mother Gladys on his right, and his domineering manager Tom Parker on his left.

As Elvis’ first record, “That’s All Right,” gave a country and western spin to the R&B of Arthur Crudup’s original version of the song, so Larry Reid and John Ohannesian’s “Black Elvis” mixed races by making Elvis an African-American, complete with Afro, while wearing a typically over-the-top suit designed by Nudie, tailor for countless country stars. Another performer at Bumbershoot also showed how Elvis can be used to subvert racial identify; El Vez (left), the “Mexican Elvis,” whose “El Vez for Prez” campaign had him parading across stage attired like Uncle Sam, sending Mitt Romney poisoned darts in the form of reworked songs like “Immigration Time” (set to the tune of “Suspicious Minds”), transforming a conservative Southern boy into a pro-Latino advocate. As another Elvistravaganza’s artists, Tim Silbaugh, put it, Elvis is such a protean character, “You can place him in any setting, and it works. It just feels right.” In death, Elvis’ image has surpassed what it achieved in life, becoming all things to all people, everyone wresting a new meaning from a story that refuses to go away.