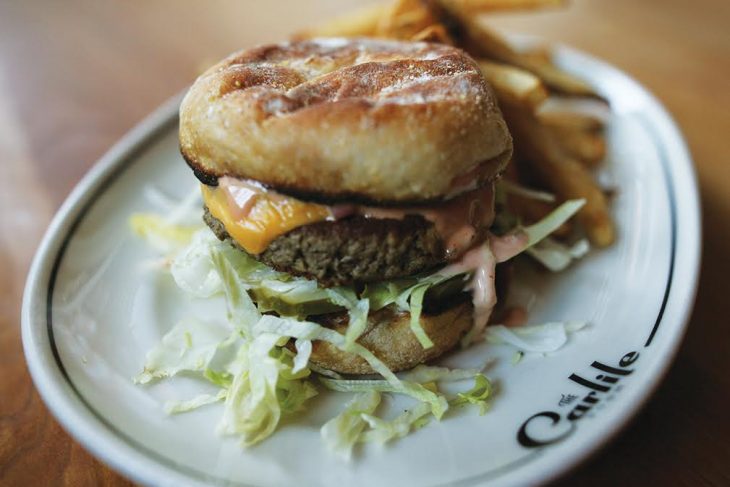 The Carlile Room is one of several Tom Douglas restaurants serving the Impossible Burger. Photo by Kelly O.

Inexpensive and nutritious, the meat-free burger will feed the future. But how does it taste?

If we’re being honest with ourselves—as eaters, as epicures, as Americans—then we’ll admit it: Meat is hardly the point of a hamburger. It’s not even half of the whole package. The condiments, those low-key sidekicks, do the real work. The patty is but a protein delivery unit in a larger ensemble that together performs a symphony of tastes and textures.

What’s a burger without a bun? Some sad paleo substitute that, lacking its own means of conveyance, requires a fork, that’s what. Ketchup, mustard, pickles—a saucy three-way that’s unholy anyplace else. Lettuce, tomato, onion if you’re the baroque type. Visually and flavor-wise, each of these ingredients is as important as the other in a satisfying burger. We know this is true, otherwise we’d have a steak. The patty could be composed of almost anything—beef, turkey, bison, lamb, a mushroom, vegetable blood—as long as its heft is proportional and its flavor carries a charry whiff of grill.

Yes, vegetable blood; more on that later. The point is that a hamburger’s immutable quintessence makes it a vessel for all sorts of wild innovation. Americans’ deep-seated love for this thing, our enshrining of its platonic ideal, means we’re able to rethink it and rebuild it in an entirely new image over and over again. Which we need to do once more, because, frankly, our carnivorous proclivities are contributing to planetary ruin and therefore coming to a necessary end, or at least a drastic downturn.

In this sense, the hamburger is a miracle food. With “billions and billions” served by disaster-wreaking fast-food megacorps, a change in industrial hamburger ideology signals a change in global eating habits, a paradigm shift on a bun. When the world gracefully accepts a meatless hamburger—which, again, is an inevitability—we take a turn toward a better future.

I mean that sincerely, though the sentiment echoes the hoopla around the city’s new wave of meatless hamburger offerings.

It started with Next Level Burger, a small, Oregon-based chain that opened last fall in the Roosevelt Whole Foods, billing itself as “A BURGER (R)EVOLUTION.” What’s more, per the website, “This is the place where you can have it all with no regrets.” (Apparently it’s time to leave behind buyer’s remorse as the traditional complement to American capitalism.) Decked out in on-trend blond wood and white tile and accented in cheerful orange, NLB sells more than a meal; their house-made vegan burgers and shakes come with a free side of positive vibes. And man, they are delicious.

On a recent weekday afternoon, the place buzzed with hungry activity—and that was before the Roosevelt High School lunch rush gushed through the door. Two colleagues and I sat at a reclaimed-wood table and split three different Next Level burgers: the Special Sauce and the Classic, both made with a “Savory Meaty Patty;” and a “Black Bean and Veggie Patty” Mexicali, plus drinks and a couple boatloads of fries. The savory patties were warm, firm, flavorful without tasting like anything they shouldn’t. The bean patty was well spiced but soft in the middle, the bane of every meatless burger ever.

Other details were good to great. The squishy “Sprouted Whole Grain Bun” tasted like a not-sprouted, regular-grain bun. Organic ketchup, good mustard, crisp dill pickles—all by Whole Foods’ 365 Everyday Value brand. The “Cheddar cheese” on the Special Sauce was made from plant oil, the “Swiss” on the Classic made from coconut oil. Vegan non-mayo would’ve been OK if it weren’t overused. The fries hit a grand-slam, their perfectly salted outsides fried crisp into a deep caramel color. The proprietary all-natural cola was pleasingly sharp and dry. My mocha milkshake, made with coconut-milk ice cream, imparted a breezy, nutty flavor that was better than the real-milk version, and it came in a reusable cup with a biodegradable straw.

NLB’s partnership with Whole Foods is brilliant strategy. They get a captive audience; Whole Foods gets happy diners lingering in their store. Grocery shopping on an empty stomach is always a bad idea, and this is the meal you want to eat before your next Whole Paycheck expedition.

Around the same time as my Next Level experience I caught wind of Tom Douglas’ impending introduction of the Impossible Burger at a few of his restaurants. This is the meat-free meat product recently launched by an Oakland, Calif., startup after six years of R&D. Venture capital-backed entrepreneur-engineers isolated the chemical component of meat that that makes it look, smell and taste like charred flesh: heme, which appears as hemoglobin in the blood of animals and exists in vegetables in other forms. Along with wheat and potato proteins and de-flavorized coconut oil (“for fat”) the Impossible Burger contains a proprietary form of vegetable heme which, when raw, makes it “bleed.”

It’s weird science that you may or may not want to know before sitting down to dinner at the Carlile Room, which a friend and I did the second day the Impossible Burger was on the menu—in the meats section, chef Dezi Bonow pointed out to us. Bonow recited the company’s claims that their burger uses 95 percent less land, 74 percent less water and creates 87 percent less greenhouse gas than a cowburger. He seemed excited by the idea of the Impossible Burger, if not a true believer in the actual product (“I’m not opposed conceptually”). He described its particularly savory flavor, then cooked a couple for us.

My Impossible Burger hefted beautifully, its density, appearance and scent real enough to allay skepticism. Served in “the classic West Coast preparation,” per the menu, it was similar to NLB’s “Special” but with less mayo and actual cheese. It went down easy; I was happy. Then I noticed a lingering tang in my mouth reminiscent of—what? Brewer’s yeast?—that Bonow had pointed out. The aftertaste of technology.

I’ll get used to it. And I look forward to more. ‘Table, a “plant-based burger” spot opened by Mark Fuller, the talented chef who cooks West Seattle’s best fried chicken at Ma’Ono, just opened downtown. Like it or not, the future is now.

Then again, as I was leaving the Carlile Room, Bonow said something like, “Insects are next!” and I shuddered. I’ll take a lifetime of feel-good sci-fi burgers before I pop a cockroach.