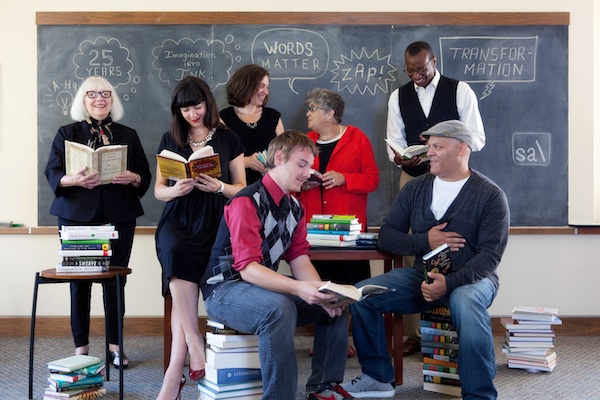 The staff at Seattle Arts & Lectures was already prepping for a banner year when it found out that it would be the recipient of a Mayor’s Arts Award.

“It’s our 25th anniversary season,” says Linda Bowers, executive director of SAL. “That’s already a real milestone, so it was perfect timing for us to receive this award. We are obviously thrilled.”

“That was a time when publishers were recognizing that there was a West Coast,” Bowers says. “It was around that time that Elliott Bay Books and the University Bookstore first started having touring artists give readings as well. The industry discovered that there was an audience here that wanted to hear an artist talk about their work and the ideas behind their work. There was an opportunity to grow the literary arts in our community.”

According to the Seattle Arts Commission, SAL has succeeded in taking advantage of that opportunity. As noted in the language that accompanied the Mayor’s Arts Award, the commission is recognizing the organization for its “transformative programs with acclaimed writers that foster diverse ideas, the imagination and a love of reading and writing.”

In its 25 years, SAL has grown. Currently employing eight full-time staffers, SAL runs on a $1.3 million annual budget that is utilized to provide a number of programs for the community. In addition to its long-running Literary Arts Series (this year featuring eight heavy-hitters including Joan Didion and Susan Orlean), SAL puts on a Poetry Series, SAL Presents (featuring popular authors including Miranda July and T.C. Boyle speaking about their latest work), SAL U (quarterly, topical and in-depth courses held at the University of Washington) and Writers in the Schools (which does what it says it does by placing working writers in classrooms across the city to inspire and instruct young writers).

SAL doesn’t just feed the city’s literary needs through these programs, says Bowers. As SAL moves into its next 25 years, it is also acting as a mirror to Seattle’s changing culture.

“One of the ways that we have grown, more recently, is to have a much more global focus,” she says. “About a third of the writers in our season last year were coming from outside the country. I think that brings to the city a narrative about some of the places that people are from, who have moved here, who are working for one of the many international companies here, or, from the other side, telling us about places where the Gates Foundation or PATH is doing work. It’s bringing a more individual story, a more cultural story, that is related to people who live and work here.”

The Mayor’s Arts Awards will be held at Seattle Center at noon on Aug. 31.