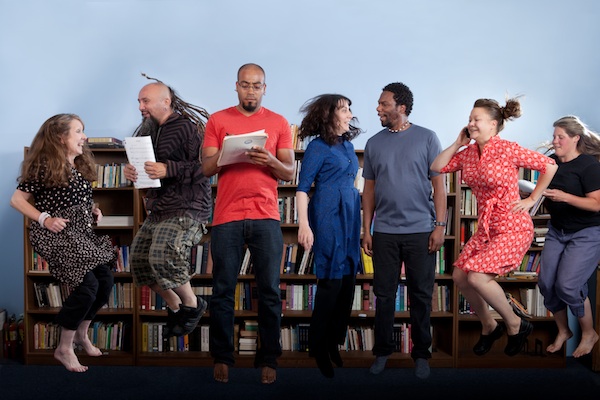 Taken together, the recipients of this year’s Mayor’s Arts Awards have the potential of touching the lives of every one of the Seattle’s citizen. This great feat would not be possible without the inclusion of Freehold Theatre, which has woven into its artistic DNA a dialogue with those on the fringes of our community.

“We are honored to have this recognition,” says Freehold artistic director Robin Lynn Smith. “Because we’re not your typical, conventional, theatre institution.”

Freehold Theatre was started in 1991 by Smith and six other Seattle theatre transplants who set out to create a place where theatre artists could engage risk as a tool in their craft. Risk was easier here. Seattle offered more affordable rents than New York City, from where Smith hailed, while maintaining a population of artists ready to experiment and learn.

In the years since, Freehold has grown into a unique-yet-essential part of Seattle’s artistic community. The Seattle Arts Commission pointed out as much when it wrote in the recognition that accompanies the award that, “through education, experimentation and performance, Freehold works toward a theater practice that illuminates the human condition and serves the full, diverse spectrum of the theater community.”

Freehold currently employs three full-time staffers who work on its two aspects, the Studio and the Lab. The Studio fulfills the theatre’s training mission, enrolling more than a hundred students at a time in a variety of classes. The Lab is responsible for both artistic development and outreach. It is out of this outreach that, in 2003, Freehold’s most remarkable program grew.

Under the banner of Engaged Theatre, Freehold takes its productions to the prisons, homeless shelters and military bases in and around Seattle. There professional actors perform classic works for audiences who are often new to theatre, but often closer to the themes brought up in these works. Through performance, the audiences witness the work, and then through workshops the artists are able to hear how the audience relates to the work.

“We’re learning about the depth and scope of our own community and our own humanity,” Smith says. “I remember when we did Julius Caesar a few years ago at [Joint Base Lewis-McChord]. It was tense for the actors to be playing warriors in front of a room of guys who are real warriors. Then, in the men’s prison, an actor is playing Brutus and saying, ‘It must be by his death …’ and this is in front of these guys in the most maximum security part of the prison.”

“We may know these parts of humanity in our nightmares or in our dreams,” Smith adds, “but we don’t know it in our life circumstances.”