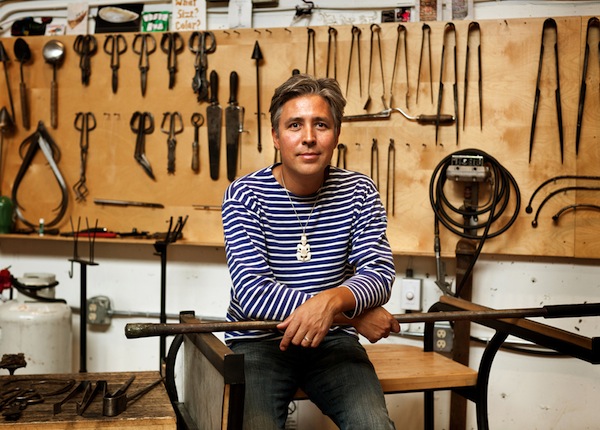 “I just put some shows up in San Francis—no, Santa Fe, sorry,” says artist Preston Singletary, as he walks me up the stairs of his glassblowing studio in Seattle’s South Lake Union neighborhood. The 50-year-old Seattle native, and direct descendant of the Alaskan Tlingit tribe, apologizes for the scant selection of art he has on display today, just one week before he’s set to receive a Seattle Mayor’s Arts Award.

Many of his latest works, typically giant glass sculptures with Tlingit formline patterns sandblasted on their surfaces, have been shipped to galleries and private buyers across the country. This year’s unseasonably warm summer is also to blame. “I’m shut down now,” he admits. “I’ll get back to work when it’s nicer to be around the fires.”

He points to a plaster cast of a totem pole that stretches over seven feet in the air. The final version of this totem pole, his first made entirely of glass, weighs over 2,000 pounds, so it’s not convenient to keep at the studio. (That finished product didn’t go to San Francisco or Santa Fe, by the way; those 2,000 pounds currently reside at a private home in Chicago.) He explains that the patterns along its surface tell a story, from the grizzly bear face that represents the cub his great-grandmother kept as a childhood pet to the killer whale that comes from his family crest.

The son of a Boeing engineer and an artistic mother, Singletary had his heart set on music, but his punk-rock leanings sputtered in the early ’80s. His change of heart came while working the night shift at the glassblowing studio that eventually became Benjamin Moore, Inc. Soon after, he began studying at the Pilchuck Glass School in Stanwood, WA, working directly for school co-founder Dale Chihuly.

“Once I started to conjoin [glassblowing art] with my cultural background, I found a niche for myself,” Singletary says. He points to his latest pre-production designs hiding in his studio’s smallest room, all of which lean toward abstract modernism; he calls out inspirations such as Noguchi and Calder. When complete, the animal-inspired shapes will come to life with sandblasted formline patterns along their smooth curves. That oblong piece of glass is an exaggerated bear claw, another takes the form of a whale; a teardrop is going to be a geoduck, complete with bulges for shell and neck that will explode with color when the sandblasted edges are exposed to light.

Thirty years into a career that has frequently combined traditional iconography with beautiful abstraction, Singletary still feels strongly about his role as an artist and a storyteller, and the cultural struggles he’s faced along the way. “Staunch, conservative Tlingit people say, ‘This doesn’t belong to Western world,'” he says, also noting that the Western world has, conversely, taken too long to recognize tribal art as a worthwhile part of the modern art movement. “But I feel like I’m sharing our wealth of art style and sculpture through what I do. It gives a different dimension to the art and culture.”

His contributions to dozens of galleries and public spaces—and board memberships at Seattle Art Museum, Pilchuck Glass School and Bainbridge’s Islandwood Environmental School—are a testament to Singletary’s ability to bridge that artistic gap, and this Mayor’s Arts Award reinforces what he’s accomplished in his home base of Seattle. “It’s an honor to have that recognition,” he says. “There was a time when I didn’t know how [such an award] would quantify into something, but I guess I’m a spokesman for my own culture now. Lively public art support in the Seattle area gets the [Tlingit] message out to people and gives people a different perspective on things.”

Looking back at his lengthy career, Singletary hopes his biggest legacy is to inspire other indigenous artists to follow suit. “Glass is a transformational medium, going from a liquid to a solid,” he says. “The culture that I’m connected to is transforming itself. As we reiterate who we are, and what we do, we’re declaring, this is now what we do. Working in new materials. Evolving as a new culture, and we should be allowed to.”