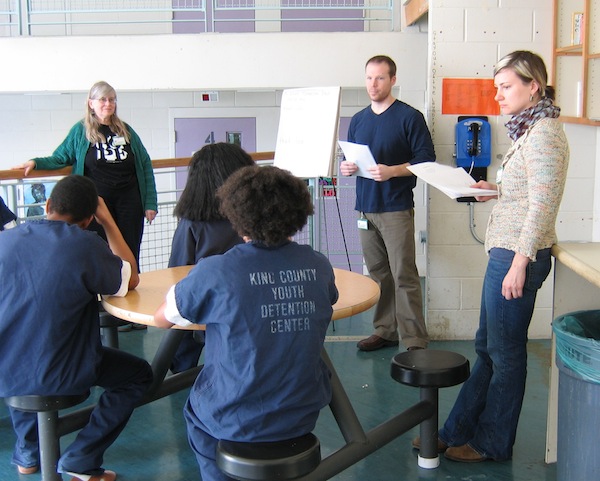 Teenagers have enough problems to work through simply on account of biology. Many of them are also living with crime and abuse on a daily basis. How can they express what’s going on in their minds and hearts? And will they, if given the chance?

The Pongo Teen Writing Project is a Seattle-based nonprofit that has quietly been extending a hand—along with pen and paper—to teens inside jails, homeless shelters, psychiatric hospitals and other sites for 18 years, and achieving results that are both extremely personal and far-reaching. This year, they’ve been honored with a Mayor’s Arts Award.

Founded by writer and book publisher Richard Gold in 1992, Pongo has worked with more than 6,000 teens and published 13 anthologies of poetry. Gold began writing with young people as a graduate student in the ‘70s, when he volunteered in a psychiatric clinic and a special needs school. He was able to facilitate something special. Time and again, the kids’ guards were let down and expression came forward that seemed to serve a healing purpose.

Trauma, says Gold, “turns people inward. They feel ashamed. What happens when you do express yourself [is] you externalize—you take what has been wrapped up in shame and hurt and put it outside yourself, and you can look at it more objectively.”

He finds that poetry in particular helps to heal, to integrate feelings and experience, and begin to process what’s been submerged. It’s not an easy or painless task.  “What’s a way to counter that sense of vulnerability?” says Gold. “To feel that the people that are listening to you are going to respect you and what you say.”

The heart of Pongo’s mission is to listen uncritically and abstain from counseling. This subtle skill is the central aspect of volunteer training. Twenty-six-year-old volunteer Vanessa Hooper began working with Pongo three years ago, after graduating from UW and feeling stagnant in cubicle jobs. She’s volunteered weekly ever since and recently became a project leader.

Hooper was scared on her first day as a volunteer—she was only a few years older than the kids in the detention center. But when her first student walked in with a huge smile, “All these anxieties and preconceived notions melted away,” Hooper says. “She was a very gifted writer. She was legitimately excited to have somebody hear her writing, and hear this power she has and that she believed she had.”

Hearing the teens’ stories of abuse, drugs and shootings can be a physical shock, Hooper says, but is also life changing and life affirming. “They have very serious dreams,” she says. By listening to them, Pongo volunteers help create space for real personal growth.

Pongo currently runs two writing programs, one at a juvenile detention center and one at a psychiatric hospital, and facilitates writing activities nationwide via online exercises. Throughout the years, Pongo has collaborated with agencies like Lambert House and the Orion Center, and a number of local organizations around town are successfully using Pongo’s writing model today.  There is also a book forthcoming on Pongo’s methods of expressive writing, and they do ongoing research on the therapeutic power of creativity.

Over the past six or seven years, Pongo has conducted 100-200 surveys per year among those they work with. Gold says that three-fourths of those surveyed report that they write about things they don’t normally talk about, and 83% say they feel better afterward. A third are brand new to poetry.

“The surprising thing is how readily youth take to it in a very serious way in terms of addressing difficult experiences,” says Gold. “The mixed emotions are very surprising—there’s much sadness, but also joy.”