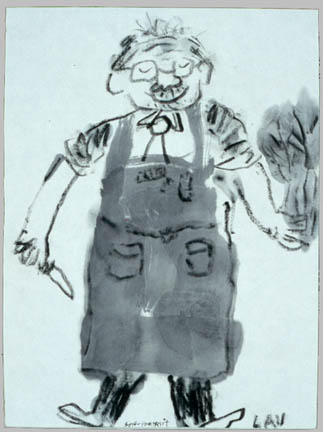 When asked exactly when he began working the art community in Seattle, Alan Chong Lau takes a deep breath and flips back through several pages in his mental calendar, “Hmm. It’s hard to remember back that far.” After a few seconds of thought, little vignettes tumble out and a varied career emerges, one that encompasses the worlds of visual art, journalism and poetry. For his contributions in these fields, and for his tireless and longstanding dedication to buoying the work of other artists in the Asian and Pacific Islander community, he’s been awarded the title of Cultural Ambassador for the 2014 Mayor Art’s Awards.

His story as a Seattle artist begins with one summer in the late ’70s, when he made the trip up north from California. Earlier he had applied to UW for grad school and didn’t get in, but the weather wowed him and so he decided to stay, not knowing about the monocloud that settles in at the beginning of October. “By then it was too late to move,” he says. Along with Oregon poets Lawson Inada and Garrett Hongo, Lau published a book of poems called, The Buddha Bandits Down Highway 99, which he read at Bumbershoot that year. Thus began the public-facing side of his literary journey. Later came the books Songs for Jadina (Greenfield Review Press, 1980) and Blues and Greens: A Produce Worker’s Journal. (University of Hawai’i Press, 2000), and no hurry (Cash Machine, 2007).

He started showing visual art at Francine Seders gallery in Greenwood in 1980. In a small essay, he writes of responding skeptically when Seders offered to put together a retrospective of his work: “What good would come of showing work that’s been shown before, I wondered?” That his first emotional response to an offer of organizing a retrospective of his work was honest skepticism and self reflection speaks to his sense of humor, humbleness and pragmatic approach to art-making. That retrospective featured abstract mixed media works with titles like “cold rain and snow (for the grateful dead)” and “lunar foliage,” which, in their titles and aesthetics are suggestive of a playful and energetic character.

Soon after he settled in Seattle, Lau started working as a bimonthly art columnist for the ID-based International Examiner, a vital magazine that covers issues in arts for the API community. Soon he took on the post of Arts Editor, a position he’s held for an astonishing 30+ years. He’s been at it so long because the work is important to him: “As a practicing writer and artist I feel a responsibility to cover the arts. I want to make sure people get recognition for what they do. I feel a little more responsibility to get it right, and to cover all artists in the community: the young and the old; the new, the now, and the future.” Poet Jane Wong recounts a story that attests to his kindness and generosity as an editor: “I wrote one review for the IE, and in response he sent me a Chinese New Year card and a drawing of a horse!”

Aside from making and writing about art for the IE, Lau also organizes occasional readings around town, mostly at the two Kobo spaces and in the ID. Like the man himself, the events often incorporate several disciplines. The blending of live music and poetry is not uncommon, and more than likely a visual artist will be showing work as well. A recent reading featured LA writer Chiwann Choi and a giant kimchi potluck, which is a pairing that should happen way more often.

His whole vibe is community-driven and nurturing, which is exactly the kind of thing you want out of a Cultural Ambassador. As Seattle’s newest one, he’ll stay steadfast in his commitment to organizing events that promote and extend the conversation going on among past, present, and future Asian-American artists and writers.