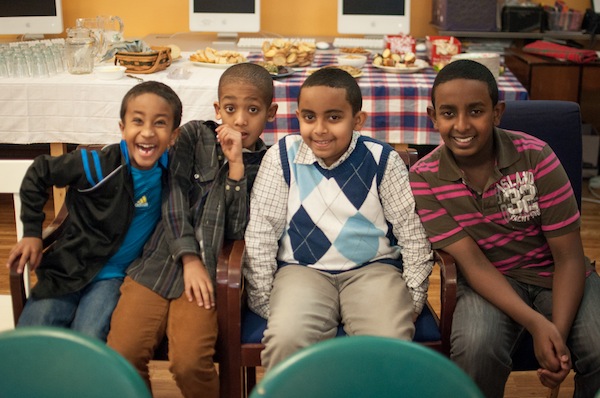 When newcomers visit 826 Seattle, one of this year’s Mayor’s Arts Award winners, they may wonder what the kitschy shop did to earn the honor. Volunteers who staff the center’s opening room, dubbed the Greenwood Space Travel Supply Co., are instructed to play along, at least for a little while, by hawking weird wares: astronaut food, maps of the universe, toy ray guns. All for sale. Really.

Eventually, visitors will notice the rickety “atomic teleporter,” a circular cardboard door at the back of the shop. Step in, turn the door, and the place really takes off.

The store motif and the “826” come from a nationwide series of similar non-profit centers, the first of which was founded in San Francisco by author Dave Eggers. Each one serves a hip, multi-cultural neighborhood starved for educational and literacy outreach. 826 Seattle, in particular, works with a largely immigrant population of students, and has contributed to the neighborhood’s growing arts-friendly reputation.

This year’s Mayor’s Arts Award marks a full-circle relationship with the city, says 826 Seattle founder Teri Hein, who reached out to the Mayor’s Office of Arts & Culture when the center’s original destination in Columbia City fell through in 2004. A call to Arts & Culture project manager Irene Gomez ended in a clear directive: “Go north!” Hein says. “There was a lot of need in the north end of Seattle, and there were no services.”

Since then, a number of city grants have fueled the non-profit’s livelihood, but the mayor’s office’s most creative contribution came in early 2011, when Gomez invited Hein and a group of 826 volunteers to present a field trip workshop at the 2011 Arts In America Conference.

An 826 Seattle field trip gathers students for an important meeting with Mr. (or Mrs.) Geoduck, a temperamental book publisher who needs a new hit written yesterday. Geoduck barks from behind a curtain, poking a monstrous hand out on occasion to point angrily or snatch drafts, as other volunteers corral the students to work together and write a story from scratch. Grasshoppers become friends with dragons. Pigs wind up on the moon. That sort of thing.

The Arts In America conference version was just as silly and inspiring, but its grown-up contributors included educator and administrators. Crucially, it also included staffers for the National Endowment of the Arts, which is why in November 2011, the First Lady presented 826 Seattle with a National Arts and Humanities Youth Program Award. “We can safely thank the mayor’s office for my right cheek being kissed by Michelle Obama,” Hein says. She also thought every student should get to pose with Mrs. Obama, which explains the life-size cardboard cut-out of her at the Greenwood Space Travel Supply Co.

Yet Hein seems more charmed by the Mayor’s Arts Award as she ponders 826 Seattle’s eight-year, thousands-of-students run. The award affirms her next big dream. An expansion or second location might be in Mr. and Mrs. Geoduck’s future.

“We’re proud of the work we do, and we do it on our own terms,” Hein says. “To get this official salute from our city is quite heartwarming. We’ve crossed over from that new kid on the block to actually being an organization of the city. Any time you get an award or recognition from your hometown, opportunities to help more kids in the city are more feasible.”