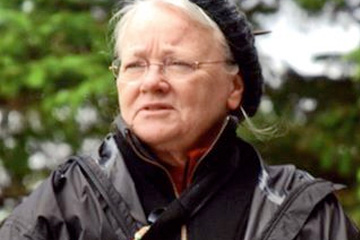 Robin K. Wright’s office is the quintessential university professor’s workspace. Books line the walls like bricks in a temple dedicated to Northwest Native American art, and it takes little prompting for her to pull those books off of the shelves, thumbing through pages and sharing information while she discusses winning the 2015 Mayor’s Arts Award for cultural ambassadorship.

Wright’s passion for Native American art began at a young age. Her father, an English professor at Minnesota State University at Mankato, came to Seattle in 1962 to pursue a postdoctorate at the University of Washington, while young Robin Wright attended John Marshall Junior High near Green Lake. It was the year of the World’s Fair, and an exhibit of Northwest Coast Art at the Fair captivated her. Wright soon returned to Minnesota with her father, but five years later Seattle called her back. She applied for, and was accepted to, the University of Washington. “It was either that or the University of Chicago,” She says, “but it was the environment here that drew me west.”

After two years of general Humanities classes, Wright found her calling in the classes of UW Art History professor Bill Holm, an important figure in the study of Northwest Coast Native American Art. “Bill was a very charismatic teacher, and I also just got hooked on the beauty of the art,” she says. “The rest is history.”

Shortly after receiving her UW Art History PhD in 1985, Wright was hired as a UW Art History professor herself and appointed Curator of Native American Art at the Burke Museum. Then the University of Washington won the bid to host the 1989 State Centennial Exhibition. The resulting exhibit, A Time for Gathering, was funded by an NEH grant, and Wright and her curation team reached out to all 36 Washington State native American tribes to bring the exhibit to fruition. A Time for Gathering became one of the first museum exhibits in the country to extensively and actively involve indigenous tribes (one of the project’s co-curators was Native American, and all the tribes wrote their own exhibit panels in the exhibit’s introductory portion). “Up until that point, all of my research had been done in archives,” she explains. “This was my learning curve for working with communities.”

Since then, Wright’s research has frequently contributed to her reputation as a cultural ambassador.  She’s been able to identify late 19th and early 20th-century Native American artisans who never signed their work, which has lead to several unintended detours into genealogy. “It’s always fun to tell someone that their ancestor made this object, or that they’re descendants of an 18th-century chief who met the first white man to come ashore,” Wright says. “I can bring what we have to share of a village’s culture from the Burke back to their community, and they share their genealogy, which informs what we know about our collection, so it’s mutually beneficial.”

After thirty years of teaching and museum curation, decades of grant writing and nearly 15 years overseeing the Burke’s successful Bill Holm Center for the Study of Northwest Coast Art (which she also founded), Wright will retire from her curatorial and faculty duties at the end of this year. True to form, she plans on using her forthcoming surplus of spare time to conduct more research and write another book. “I started it right after I finished my book on Northern Haida master carvers in 2001, and now what year is it—2015? I have to retire in order to finish the next one!” she says with a laugh.