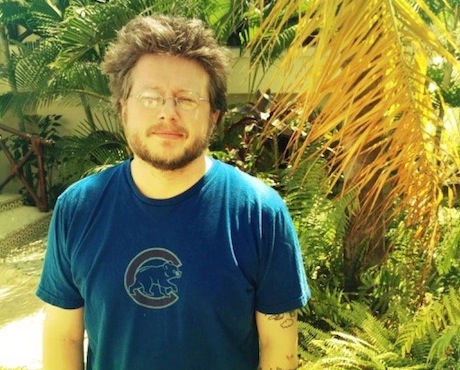 Somewhere in the jack pine forests of Michigan’s Upper Peninsula, the characters of Matthew Simmons’ new book of short stories Happy Rock find their home. Happy Rock (published by Seattle’s Dark Coast Press) is a book unhinged from the rules of genre. The collection’s individual stories inject banal small town narratives with the absurdity and magic of superhero comics, none of it seeming less authentic than the rest.

On Tuesday night Simmons and his readers, friends and family gathered at Hugo House to celebrate the launch of Happy Rock, which has been over a decade in the making. The launch coincided with the author’s 40th birthday, making it doubly charged with excitement for both Simmons—who was given a golden crown by his publishers—and those in attendance.

The mood and mode of the book launch/birthday party seemed to mirror that of Happy Rock. The book is only 120 pages, but it sucks the reader into time-lapse chutes where quiet, bizarre worlds rise off the page as if from a pop-up book. The party, from start to the end of Simmons’ reading, lasted under an hour. It showcased Simmons’ phenomenal talent both as a writer and as a reader of his own work.

Simmons, who was wearing a shirt with the shape of the Upper Peninsula on it, read “Saxophone Lung,” a story he joked was “entirely true.” In the story, the narrator’s father creates a series of replacement wives following his real wife’s death. The droid-like replacements are fashioned from clay and various objects once belonging to his deceased partner—a coin purse, a clarinet, a saxophone and a wedding ring, among other things. The son, who lives at home with his father and the replacements, begrudges that fact that he must simultaneously put up with his father’s inability to let go and the short self-destructive temper of his fake, clay mothers.

The reading was hilarious, but like many of the book’s melancholic stories, it also brought on a pang of heartbreak. In every story, as in “Saxaphone Lung,” absurdity balances elegantly against human imperfection.

Among the other characters in Happy Rock are two teenagers endowed with supernatural powers from a rogue meteor, a 200-lb bull mastiff named Father recently liberated by a pair of born-again Christians and a closeted teenage boy with a penchant for Dungeons and Dragons and a floor-length rabbit fur coat.

Though the weirdness of these worlds is mined from Simmons’ imagination, the emotions and day-to-day realities of the characters are familiar. For anyone who’s ever had a bad day at work or made out in their parents’ wood-paneled basement as a teenager, Happy Rock feels like a distant memory, or maybe a quick ticket home.