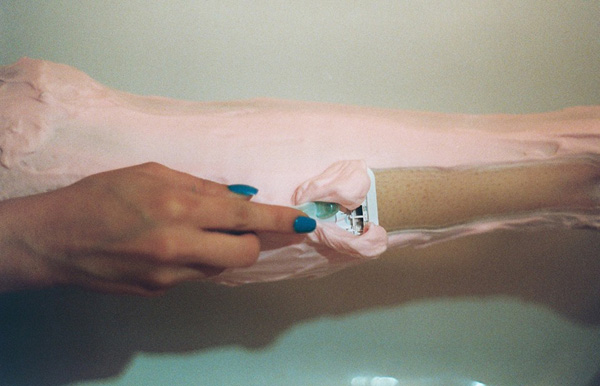 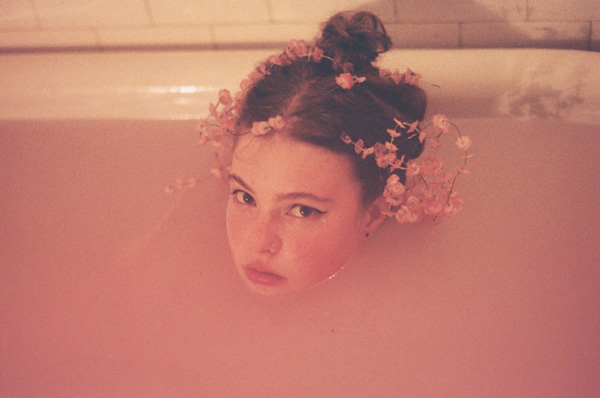 Armitage is young: She’s currently studying photomedia at UW. With respect to photomedia programs, one of the things that stands out in her work is the absence of collegiate fluff in the form of supporting installations and mixed-media bric-a-brac to buttress her prints. Here the photographic image stands alone, almost a throwback to older times, with images shot on Fujifilm developed at Bartell Drugs, framed in simple, slender, pink and baby blue frames pinned to a shabby wall.

The images depict vignettes of ritualized girlhood, often taking place in a bathroom or boudoir. One photograph shows a girl’s hand, carefully manicured nails painted eggshell blue, grasping a razor that cuts a swath through pink shaving gel that foams like whipped cream or cake frosting. In the razor’s wake, a pale leg peeks through, mottled with hair follicles that give the leg the vaguely cadaverous quality of meat.

Another of Armitage’s standouts is a photo of a girl’s head, her pouty lips peeping out from a tub filled with strawberry-pink bathwater. The model’s head is cut off at the neck, her knotted hair threaded with pink flowers, her lids carefully cat-eyed with liquid liner. Much like John Everett Millais’ ecstatic, drowning Ophelia, the image plays up many Victorian and pre-Raphaelite visual tropes of burgeoning female sexuality in all its listlessness. The saccharine, flat monochromatic color, the half-drowned head, the milky water that barely veils her nudity: all allude to the perilously permeable boundaries of the Madonna/whore/Lolita/femme fatale stereotypes—whether self-imposed or culturally ingrained—that pave a girl’s entree into the material, sexual world.

The material aspect of the teenage girl’s universe is important in Armitage’s work. She references (straight-up appropriates at times) scenes from Věra Chytilová’s Daisies—an avant-garde primer of adolescent female anarchy. The film is a cult classic of Czech New Wave cinema, released in 1966 and banned shortly thereafter for “depicting the wanton.” It follows two moody, misfit girls both named Marie in a chronic romp. Not quite of this world but not exactly outside of it, they find sly ways to subvert their sleepy, patriarchal existence with girlish pranks and destructive behavior. They trick horny old men into buying them fancy dinners. They flail around their bedroom in lingerie, cutting sausage and bananas and other phallic edibles with shears, burning things, scrawling across walls. In a grand, orgiastic finale the duo crashes a dinner party in advance of the guests. They strip down to their underwear and promenade through the rich food, impaling meat and cakes and fruit with their pointy kittenish heels.

Armitage presents less full-throttle surrealist anarchism in her girlish imagery; she seems to take much straightforward pleasure in the comparatively demure spectacles she photographs. But the seeds of unrest are there, rooted in Chytilová’s tradition. 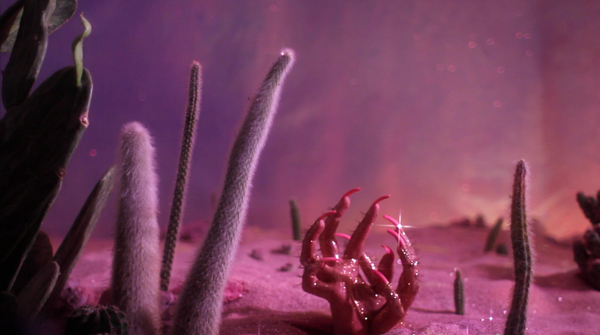 At Interstitial in Georgetown, Hannah Patterson tackles a similar subject with a different approach and similar candy-and-powder-puff palette. The centerpiece of the exhibit is the 15-minute digital film Wish You Were Her. It opens on a dimly lit jungle swampscape, a hothouse filled with fleurs du mal. The film set is lined with bouquets of pink bleeding-heart flowers flanking a dank, misting pool. Fog rises from the cauldron, curling around the vegetation. At intervals figures make darting appearances: A black, glittery forearm like a sock-puppet serpent emerges, flops around for a moment, then vanishes. Another scene removes us to a magical desert where hot-pink fingers grow from the sand like claws. They’re caked in a thick crust of glitter, tips sheathed in pink press-on nails. The plant/beast/thing furls and unfurls grotesquely, like a mutant Venus flytrap or a monstrous vagina dentata, drinking in a stream of glitter that rains from above. The surrounding landscape is a wasteland peppered with tubular, pastel succulents and a sky swirling with violet galaxies.

The video is tantalizing but the real bijoux of the show are three GIFs made from still frames stripped from the video. They play on Android tablets sunk into the gallery wall, encased in custom picture frames. The moments trapped on loop like the glitter-munching desert claw are eerie, crystalized and gorgeous.

In Patterson’s garden of just-out-of-reach earthly delights and ungraspable forbidden fruits, returning to a state of innocence is clearly impossible. We’re left with the glitzy husks of prescribed drugstore glamor and the insatiable appetite that accompanies it. Like Armitage, Patterson offers no resolution, just gilded boredom and meaningless gorging that glosses over unspoken, ominous things. The sting that both artists deliver comes with the viewer’s complicity in the mindless consumption of that gloss—undeniably delectable, eternally superficial.