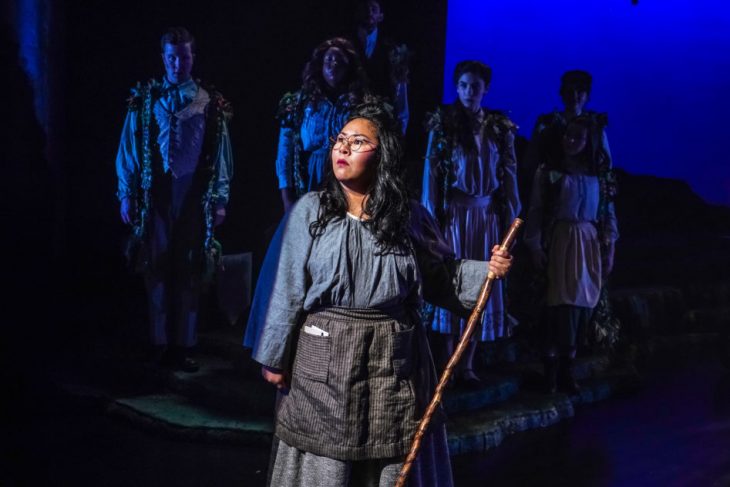 Book-It Repertory Theatre’s new musical adaptation of Howl’s Moving Castle is crammed to its cobwebby crannies with quirky characters and singular references, all flying at you fast and furious. Please pay attention! It’s important to keep up.

The opener is a singing synopsis of the fantastical universe about to unfold before us, as adapted by director Myra Platt and composed by Justin Huertas. It’s easy to get overwhelmed by the information-dense song, which educates us on the magical land of Ingary and the dangerous old Witch of the Waste who plagues the land. It introduces the three wide-eyed sisters who work in the boring old hat shop, and the mysterious and fearsome Wizard Howl who lives in, you guessed it, the titular moving castle. There’s also quite a bit of fuss about cake.

If you are familiar with Diana Wynne Jones’s iconic 1986 fantasy novel (or the widely acclaimed Hayao Miyazaki/Studio Ghibli 2004 animated film adaptation of it), you’ll be somewhat ahead of the game. Howl’s is framed as an unlikely love story, but at its heart, it’s much more the tale of a woman who is thrust by forces beyond her control on a journey of self-discovery, where she learns to love herself and realize the strength she never suspected she had. It’s quite an empowering and inspirational feminist message at its core.

Our heroine, Sophie Hatter (the nimble and thoroughly wonderful rising star Sara Porkalob), is a young woman who, with her two slightly younger sisters, sits eagerly on the threshold of life. Sadly, as the oldest, she is expected to continue the business of the family hat shop, ensuring a safe and predictably boring future. She’s left behind as her sisters move on to greater adventures, until one day, she runs haplessly afoul of the dreaded Witch of the Waste (a sleek and ferocious performance by Kate Jaeger, enticing and malevolent in perfect balance), who settles upon young Sophie a punishing curse, transforming her instantly into an achy 90-year-old hag. What’s more, the spell forbids her from telling anyone that she is under a curse at all.

As young Sophie, Porkalob is sweet, humble and resolved to her meager, hat-making fate. But as old Sophie, she takes off the gloves and truly shines, embracing the unexpected freedom of her suddenly advanced age, and the escape from her former life that it provides. Feisty and funny, unburdened by the dull fate that once stretched before her, she sets out to embrace her new life as an old spit-fire with nothing left to lose.

In her travels, she encounters the vain, woman-chasing sorcerer Howl (a strong performance by Michael Feldman), who takes her in as his cleaning woman. There she meets Howl’s 15-year-old apprentice Michael (Randall Scott Carpenter) and a fire demon called Calcifer (Lamar Legend), who is the power behind Howl’s magic castle.

There are no overblown attempts at special effects or makeup tricks in Sophie’s transformation from girl to crone; Porkalob pulls it off with nothing but prodigious acting chops and the power of suggestion. This is true of the entire production, which is staged with elegant and ingenious simplicity and relies much on the audience’s own imagination. Epic supernatural battles in the clouds are accomplished with nothing but narration and the reaction of the characters. A magic castle that walks around on all fours is brought to life with nothing but some clever costume design by Margaret Toomey, movement design by Table Flip and the formidable, eight-person chorus’s own bodies.

Marvelous performances abound here: Besides Porkalob and Jaeger (who does double duty as the good witch Mrs. Fairfax—it took me more than a minute to realize both characters were her), but special mention also goes to Legend as the wry and sassy fire demon Calcifer, whose humor and smoldering shade stole a scene or two, and John Coons, who knocked it out of the park with the song “Our Boy’s Gone Bad,” as Howl’s mentor and magic teacher, Mrs. Penstemmon.

Huertas’s original music is often appropriately soaring and anthemic, and contains more than a few earworms—the bouncy and silly “Cake!” and Jaeger’s “Witch of the Waste” both stayed in my brain for days. As a long-time fan of the source material, I am happy to say that Book-It’s new production beautifully exceeded my expectations.