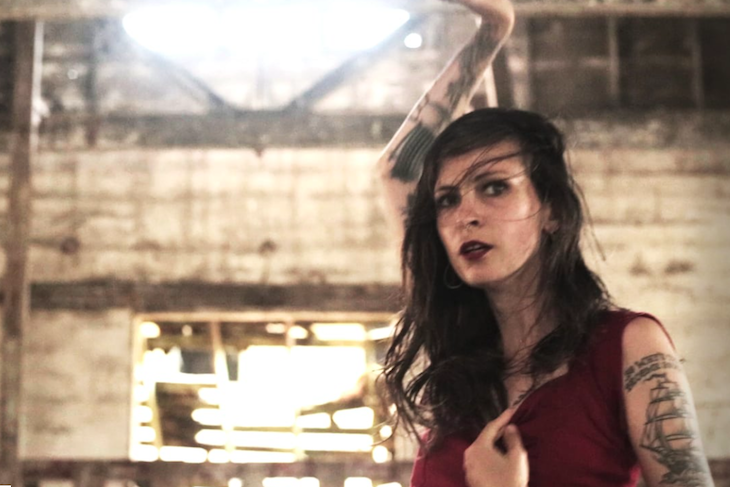 Jessie Smith in one of three new music videos out from Marion Walker.

“With almost no budget and very little materials, how do you make something that is borderline impossible?” asks Kyle Akins, the lead singer/guitarist of rock duo Marion Walker, as he describes the band’s tendency to take on ambitious projects with a raw aesthetic. We’re sitting in a Beacon Hill tavern with the band’s bassist, Jessie Smith, to discuss the pair’s three new music videos, which fuse avant-garde contemporary dance with barebones, gritty rock ’n’ roll.

The videos support Marion Walker’s seventh album, 111EGAL SUNSHINE, out May 12. The album features a revamped sound that’s less acoustic than the duo’s previous records. 111EGAL SUNSHINE uses a drum machine and distorted vocals to create a laid-back pop vibe with fuzzed out chromatic riffs and heady metaphor; its 11 tracks range from love songs addressing the devil to an existential lament. But Marion Walker is more than a rock band, it’s an art collective that encompasses many artistic endeavors. The videos—directed and choreographed and performed in part by Smith and shot by hand by Akins—present a moody visual landscape to go with the infectious anthems: Two are set in gritty, industrial locales, while the third is more dreamlike.

Smith trained in contemporary dance at Cornish College of the Arts and went on to choreograph for performance art companies Saint Genet and Implied Violence, as well as her own dance-film company, Dead Bird Movement, making works that tested the endurance of the human body. “Through all of my history of making dance films I’ve been pretty obsessed with the motion of the camera, and how to get that to capture the motion of a dancer,” she says.

Marion Walker—Smith and Akins’ middle names—was conceived in 2012 in a $50/month studio in Reno, Nev., where Akins, a Reno native, was living. Smith was passing through town when her van broke down. “At some point, Kyle and I both ended up at the same basement show. I shot-gunned some beers, ate some Flamin’ Hot Cheetos and puked up neon vomit!” Smith laughs. From this chance episode, Marion Walker was born. In 2016, the duo moved to Seattle, where Smith had dance work and access to studio space to record 111EGAL SUNSHINE.

Bringing dance into Marion Walker seemed like a natural progression in the band’s trajectory. “It’s all kind of the same idea of controlling/creating arcs—emotional or energetic arcs within art pieces, which is songwriting or choreography,” Smith says of layering rock and dance on top of one another.

Making a music video with dance is different from making a dance film with a supporting score—and offers more creative leeway. Whereas a music video dramatizes movement with accented cuts, a dance film emphasizes the precision of unmediated movement. In a music video, a performer cocking their head might signal a downbeat or punctuate an emphatic lyric, rather than thematic or narrative importance.

This tension between human movement and rhythmic cues is prominent in “Beelzebub666.” The video features Ellie Sandstrom dancing in silhouette through a Beacon Hill warehouse at night, framed by high-powered fog and stark, expressionist lighting that ushers the viewer through an industrial underworld.

Smith realized during rehearsals how counterintuitive it is to soften a dancer’s movements using low lighting, but also that letting go of the constraints of dance film was liberating. “Had I been making [the video] as a dance film, I probably would’ve chosen to light it differently so that I made sure you could see the choreography really intact,” Smith says. “But I actually really love that part of it.”

Akins shot all three videos with a handheld camera, establishing the camera as a character in its own right within the world of the song. His camerawork follows the dance phrases—such as a near-vertical kick by Smith paired with a tilted camera angle, or when Sandstrom briefly leans out into the light, making a close-up of her face looking into the fisheye lens—like a drone gone rogue, adding mystique to the dance sequences and the performers themselves. Akins learned the dance phrases so he could stylize the camera’s “mannerisms” in relation to them.

“Better Say So, Scapegoat” features dancer Jim Kent as an agent provocateur dressed in tight-fitting pink latex and gyrating his hips against a Technicolor wallpaper. His jaunty movement supports Akins’ psychedelic lyrics, which present love in contractual terms: “You better say so, there’s no guarantee / And if you say so, I’m all you ever need.”

In “Low Lyfe High Priest,” Akins guides the camera frenetically in semicircles around Smith, matching the cadence of his vocals to that of the camera and to her fitful, graceful motions. The result is a sort of push and pull between the camera and Smith’s movement, wherein each challenges the other to keep up with the video’s explosive energy.

Crossovers between rock ’n’ roll and modern dance trace back at least to the seminal 1988 collaboration between David Bowie and the La La Human Steps, in which Bowie and dancer Louise Lecavalier play out an intricate power struggle to the tune of “Look Back in Anger.” Marion Walker’s videos likewise challenge us to keep up with their tongue-in-cheek provocations, always upending expectations.

“To be a low-life high priest is just to be a sweetheart underdog,” Akins explains of the transgressively named, lyrically lulling anthem featuring Smith’s dancing. “It’s just a love song to the devil.”

Marion Walker celebrate the release of 111EGAL SUNSHINE and screen their new videos on May 12 at the 9lb Hammer in Georgetown.