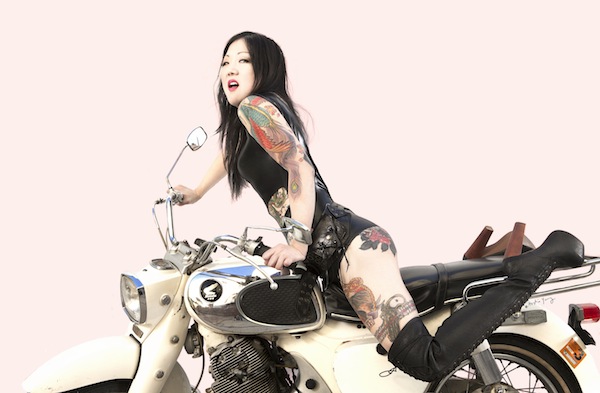 Seattle favorite Margaret Cho returns to the city this week with her latest show, Mother, which she’s performing at the Moore Theatre on Nov. 16. On one of her rare days off, the comedian took time to chat with City Arts about motherhood, her hopes of being a co-host on The View and being admired by a mass killer.

How’s the tour been going?

It’s going really well, it’s been really fun. To me, it’s not really work; it’s like the most effortless thing, even though it takes a lot of energy to get around the world. It’s a very homelike environment I create for myself when I tour, and I just really love it.

Your second concert film, Notorious C.H.O., was shot in Seattle. How did you end up filming here?

I love Seattle and I really love performing there, and I knew that it would be a really great show. I also wanted to do it in some place that was very Asian American and very gay. Also, at the time, it was where a lot of our crew was living, so it made a lot of sense to do it there.

I almost didn’t make it there for the shoot. I got stuck in a very, very big storm on Christopher Island, a big, very intense Caribbean storm. I couldn’t get off the island because all the flights had been cancelled, so I actually chartered a plane in the storm—not all the way to Seattle, but to Miami. I’d never done that before, and I don’t think I would ever do that again [laughs]—I think it’s very irresponsible environmentally! But I had to get to Seattle because of the filming, so I didn’t really have a choice. It was a really gratifying thing to get to film the show in Seattle, and I think the film really reflects how great it was to perform there. It was at the tail end of a very intense journey for me, so it was really wonderful.

What is it you love about Seattle and performing here?

I think it’s a very progressive city, and Washington is a state where the LGBT community was determined about marriage equality. They knew they were going to have it in their state regardless of the fact that a lot of the state can be pretty conservative. You get outside of the city and it’s really different. In Seattle they think more progressively, they think more towards voting and towards being active in politics. I’ve participated in various campaigns there, in getting gay marriage and getting LGBT rights there, and it’s a really positive and exciting thing when the community’s really active in making sure we can attain those rights.

And we just elected a gay mayor.

I know! What are the particulars of that though, because nobody could tell me. I couldn’t really understand what it meant. Is it for recreational use? Is it still available?

They’re still hammering out the specifics. Have you been able to check out the city on your visits?

No. Usually when I go, I’m there briefly. The only time I spent any significant time there I had been following the tour of a great singer-songwriter that I like, Neil Finn, and I’d gone up there on a road trip, just going to his shows all through the Northwest. In Seattle, Eddie Vedder came and played with him; that was really exciting. But that’s the only joyful, fun pleasure trip that I’ve had there. Everything else has just been work—which is joyful too.

Your show’s titled Mother, so can we assume your mother is part of the show?

There’s a lot of different things happening in the show. “Mother” is something I get called a lot; I have a lot of younger friends and I’m really like a mother figure in a lot of ways to them. And then there’s the presumption that if you are a woman and you are in your 40s or above, then you must be a mother of some kind. I’m not a mom, but I love that title. And I do talk about my mom a lot; she’s always been a very big part of my comedy. So it just made sense to me that that would be a good title.

But it’s about a lot more than just motherhood. It touches on that, but it goes into all the aspects of motherhood; maturity, and aging, and then also abortion and all of these things that are pretty edgy and tough to talk about. I think people have a lot of issues about it, and it can be pretty scary. But I think it’s a really fun show.

There’s this perception that if you’re not a mother, then you’ve missed out.

Yeah, we’re sort of looked at like, “Well what happened?” It’s an assumption that people make; they just think of women as being wives and mothers instead of independently themselves. When truly, you can still be a mother; you can mother everyone, you can mother the world, mother the planet, and be there for everyone. And I think it’s really important, especially in the LGBT community, to be an elder and to step up to that, and to be that sort of authority on things.

Your comedy’s always been pretty topical; how do you choose your subjects?

There’s a lot of different ways. I go through phases of having things that I would like to talk about and would like to address, and it also just depends on what’s going on. For example, I was mentioned in Christopher Dorner’s manifesto [the former LAPD cop who went on a shooting rampage last February before being killed]; he said I was one of the most beautiful women in the world, and I was like [laughs], “Oh my God, thank you!” It’s one of those things where you go, “I have to talk about it, even though it’s a terrible thing.” You do get drawn into the world of news. And it’s a cool thing. I’m excited about being able to write about things that are topical and are immediate but feel very dangerous too.

Are there any subjects you wouldn’t tackle?

No. I think it depends on your ability; there’s a level of skill that is involved in sensitively approaching things. I think you have to be good at it to approach anything that’s really taboo.

You’re the only performer I know who found something humorous to say about the Virginia Tech massacre.

Well, for me, that was more of a reaction to how racially insensitive a lot of the coverage was and how my own family reacted to it too. So there were a lot of things happening that made it more identifiable for me. But again, it was another really terrible situation. And I think the Korean community really didn’t know how to talk about it, because they don’t know how to process it still.

Are there topics you think have been overdone, where there’s nothing more to say about them?

No, I think there’s always something viable to say. If you have a unique take on it, it’s infinite; there’s no way you could say, “I think this has exhausted its appeal.” There’s got to be some way to talk about everything. I think it’s got to be infinite.

Do you update your show while on the road?

Oh yeah, every day it’s different. I try to make it different and unique. And it’s fun for me too. But it’s always changing, since live performance is really alive.

I hear you’re in the running to be a co-host on The View.

I don’t know what’s happening there, but I would love to do it. I’ve been on the show as a guest and I’ve co-hosted numerous times. And I think that’s something I would like to do in the future, have some kind of a talk show where everything is very immediate and very news driven. That’s a goal. I have a podcast that I do with a great comedian named Jim Short who tours with me. It’s called Monsters of Talk and we talk to a lot of different people. It’s a very fun thing to interview people and it’s something that we enjoy.

What else are you working on?

I’m going back to do Drop Dead Diva, the show that I do for Lifetime; it’s in its sixth season, which is really incredible. And I’m going to Europe at the end of this year. It’s very exciting to perform in different countries, like Norway and Switzerland. You feel like Josephine Baker. That’s always what I feel like when I go over there. I feel like a jazz singer or Ella Fitzgerald or something. That to me is a very thrilling thing.

Without giving too much away, what can people expect from your new show?

I think that it’s very dirty. It’s surprising me too; it surprises me how filthy it is. It’s because we think of mothers, women who are older, as being kind of, I don’t know, pure or saintly or whatever. But really, you don’t get to this age without spewing some things. So I would say this is as filthy as I can be; I can’t believe it myself. And that makes it the funnest for me.