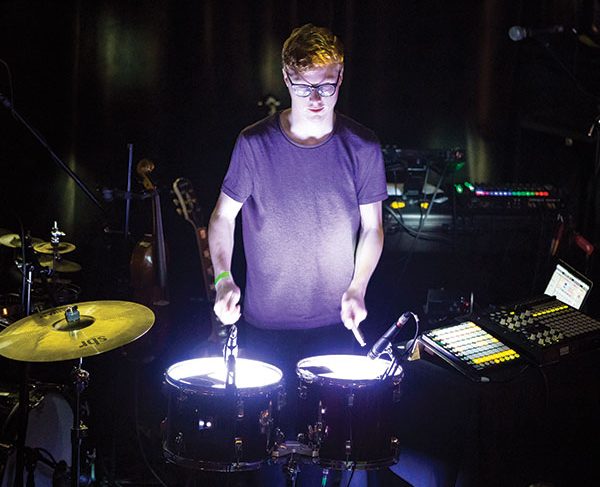 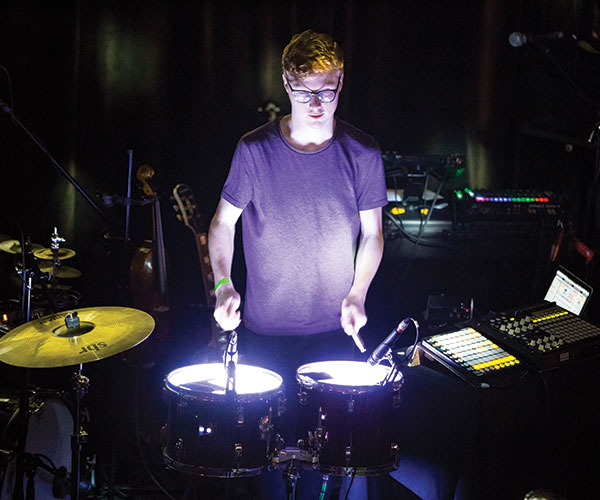 “This is one of the coolest shows I’ve ever played and that was one of the worst things that’s ever happened!”

The cool show: Grant Eadie, the multi-instrumentalist known as Manatee Commune, selling out Nectar on a recent Friday, 400 fans reveling in various states of chemical enhancement. The worst thing: Eadie’s MacBook rattling off its $3 TV tray and onto the stage, potentially sabotaging his EP-release party 10 minutes in. Miraculously, the music never stopped. But after the song ended, Eadie was too earnest to not acknowledge the near-fiasco.

Beyond earnest: He’d started the performance, as usual, without shoes. Within a few minutes he’d ditched his glasses. Throughout the night, Eadie swapped between viola and electric guitar to add sinuous melodies to his gently simmering digital beats—beats wrought from an MPC and Ableton Launchpad that he bolstered with a pair of tom drums, each strapped with its own small spotlight, custom-built by Eadie to flash with every hit of the stick. Upbeat and infectious, ideal for loopy, heedless dancing, it was a full band’s worth of music coming from a single 23-year-old red-headed music nerd who was growing up on-stage, in real time.

“You saw a microcosm of my career in an hour,” he tells me later.

Eadie became interested in electronic production while studying music education at Western Washington University in Bellingham. Back then he was recording and playing guitar in an indie-rock band called Soccer Mom; before that he played viola in a host of Northwest ensembles, including the WWU Symphony and his hometown Spokane Symphony Orchestra. In Bellingham, he found holing up in his bedroom with his digital equipment more rewarding than the group commitment required of a band. And, he says, the town’s creative community nurtured his obsession.

“There’s a particular form of pride Bellinghamsters have. The best way I can describe it is that there’s a saturation of overly educated young people that are bored and really high and really excited about anything that’s different from what they grew up with or what society has been offering.”

Emblematic as it is of the Northwest’s organic electronic sound, Manatee Commune has attracted fans across the U.S. Last June Eadie was selected to participate in the Red Bull Music Academy’s elite Bass Camp weekend at Bonnaroo, which he credits for shaking loose the writers block he experienced after self-releasing his debut, Brush, in 2014. Last August he was spotlighted by NPR for a video he submitted to their Tiny Desk Concerts series. And his new EP, Thistle, came out on Bastard Jazz, a Brooklyn-based label renowned for its roster of boundary-pushing artists, which will also release his next LP later this year.