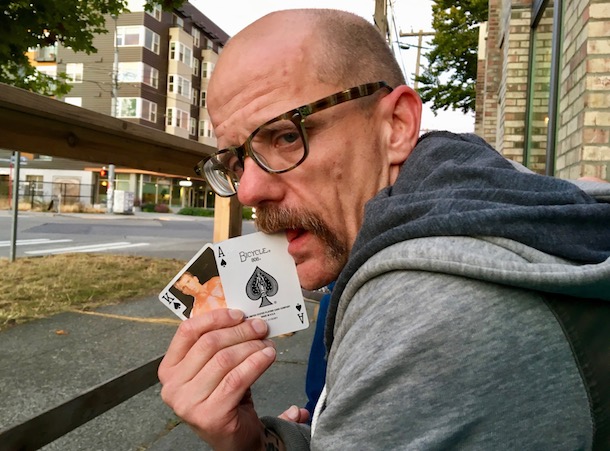 Improv can be exhilarating as hell. When an improv show really clicks and jokes come fast and furious, the performers and audience are equally amazed and delighted that it’s all coming out of thin air. But there’s also nothing more “you had to be there” than a great improv show, and the comedy becomes something like an inside joke shared only by the people in the theater. That’s where a good recurring character can come in handy.

Recurring characters often become tedious in sketch comedy and there’s no better example of that than Saturday Night Live, always eager to take something that works and do it again and again until the concept is bled dry. In improv, recurring characters become surprisingly complex and endearing, because each appearance and interaction adds to their canon of life events. That makes it hard for the performers to keep their accumulating details straight, but it’s hard to get tired of the characters because they’re always evolving.

Stephen Hando is up to the challenge. In Keefee’s House of Cards, which plays first Thursdays at the Rendezvous, the local actor spends the entire show as the titular character, a hilarious, emotionally erratic blackjack dealer from Tallahassee. The premise of the show is simple and unique: four volunteers are selected from the audience and Keefee deals blackjack to them. He asks them about their lives, talks about his own situation and proceeds to go through a series of personal crises. Anything can happen at any moment because nothing is planned, and Keefee himself is a bit of a wild card (I am sincerely sorry about that pun).

Last month, from the moment Keefee arrived on stage dancing excitedly in Daisy Dukes to muffled music from an uncooperative PA system, I could tell I was in for something special. Then I got together with Hando to discuss the finer points of headlining the comedy equivalent of holding a tiger by its tail.

How did you get into performing?
I went to school in Tallahassee, Florida State University, and got my theater degree, so I’m a legitimate actor. Moved to Seattle in ‘92. I didn’t want to go to NY or LA and Seattle had sort of a cool theater scene at the time. I’d never even seen the city before, just moved. I worked with Printer’s Devil Theater for a time and did shows with a group called Greek Active that Dan Savage was the director of, and it was great. We did St. Joan, King John and Shakespeare but did them at the Re-bar, so it was that kind of really bawdy, bar-type show.

What was the genesis of the Keefee character? I’ll rephrase that when I write it so it sounds better.
Please do, that sounds so stupid! [Laughs] Theater Schmeater did an event, just one time that I know of, called the Laugh Olympics, that challenged people to do something that only we would think was funny. I did this character Keefee based on a real manager of a bar in Tallahassee, who’s still alive. He was one of those gay, southern queens who was just out there and nasty, and doesn’t take bullshit. I based it really on one little statement. I heard him dressing some girl down and he was like “Bitch, don’t you fuck with me!” [Laughs] And I was like “OK! He is putting it out there!” And there’s something about southern drag queens and southern gay men with that southern hospitality but also this kind of cutting edge. The initial monologue that I did for Keefee was super dark. It would always end with a person leaving him and him wandering off and trying to find some kind of companionship. He was this super lonely drunk! And that was funny to me.

The super-depressive side of Keefee, essentially. Because he’s always really up and then he descends.
For sure. And so I did a series of eight or nine monologues at Spin the Bottle and other shows, and I thought, “I should make something out of it, but I don’t want to do a one-man show that’s like “Here’s me talking!” That’s just not interesting to me. And I was out at Port Townsend with some friends and we were playing blackjack for whatever reason and I was dealing as Keefee, just randomly, for hours. And everybody was drinking and drinking and I just kept going. And the next morning it was like, “This is what you should do.”

I had a feeling it had to be some kind of organic way that it came about.
I mean, I like to go to Vegas, I like to gamble. I’m not a super good dealer, but it’s fine because Keefee isn’t a super good dealer and doesn’t have to be. It’s doing the Bob Fosse thing where I take my weaknesses and make them strengths. [Laughs] As lazy and sloppy as I am, Keefee takes that in and embraces it and makes it real and OK.

Because you stay in character the whole time I would look forward to things going wrong, like, “what’s Keefee going to do about this?”
The initial show was more structurally based. There were other characters and we were in Las Vegas and there was an arc to the evening that was set. Coming back to it I just wanted to cut away all of the bullshit. You know when you’re watching something like that and you go, “Oh, this is the part where they know what they’re doing” and part of you checks out. Well, me anyway. Take the risk! I was like “Can I do a show where I don’t know what’s going to happen, literally?” And I cut the Vegas conceit, which was kind of fun but audience members were having to buy into something and act something. It’s better if they can just be who they are. It’s like a talk show, really. And [Keefee] being so out there allows people to let their guard down and say things they might not say otherwise, and with their backs to the audience they forget a little bit that they’re in front of an audience. It can go to some really interesting places. I try to keep it funny, but I’m not afraid to let it go to a dark spot.

That’s what I like about it; you can tell when you’re watching it that it can go anywhere.
Right! And it’s terrifying for me every time I do it! I’m like “Why am I doing this to myself? Am I horrible? I’m a horrible performer, I’ve prepared nothing!” [Laughs] Except I try to develop a world for him so that there’s a narrative happening in real time. I’m glad to have this thing where I do it first Thursdays and my hope is that people will start to engage with the materials and the ancillary characters as those become more developed and people will feel like they have an investment in it, “Oh my god what’s happening with Barry? Randy didn’t call you this week?” If I can do that—it’s a trick, right?

That’s how a lot of my favorite comedy podcasts work. It boggles my mind that they have to keep, in addition to their own life, the details of a whole other person’s life in order.
Totally. Knowing that’s going to happen, I think it’s kind of fortunate that a lot of the time his life mirrors my life! [Laughs] I created him when I was in my early 30s and he was then my age now. So I am now the age that I first imagined Keefee to be. Just the sort of place where you’re like “Oh, I’m not a young gay man anymore.” And those ruminations on getting older are certainly more grounded than they were then. It was my idea of what it would feel like to be regretful, and now it’s like “OK, now I really know what that is.”

I want it to be funny but I don’t want Keefee to be a joke, or be a caricature or a parody of something. Because that’s not interesting to me.

See Keefe’s House of Cards Thursday, Oct. 5 at the Rendezvous