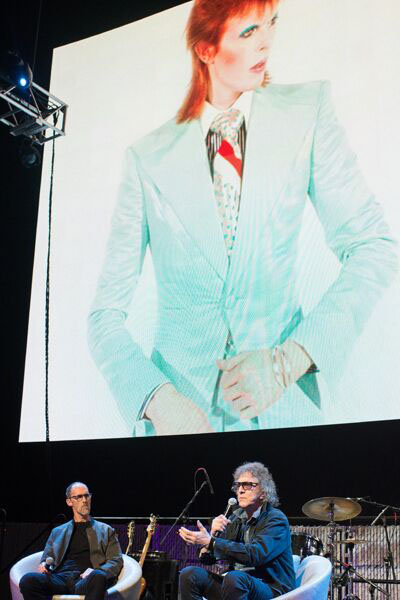 Mick Rock can humblebrag with the best of them and he’s got a helluva lot to humblebrag about. Since shooting photos of his flatmate, Pink Floyd co-founder Syd Barrett, in 1969, Rock (his given Christian name) has become a human through-line, cutting through nearly 40 years of rock ’n’ roll.

Rock’s overstuffed resume includes iconic album covers for Lou Reed, Iggy Pop, Queen, the Ramones and Joan Jett; literally thousands of fashion, rock and portrait photos; pictures from the earliest days of the punk scene in London and New York; and even early music videos for the Kinks and Paul McCartney. He continues to be a sought-after photographer, lending his kinetic visual eye to photos of Michael Buble, Lady Gaga and Bono.

With all that, Rock’s biggest claim to fame remains his pivotal work as David Bowie’s personal photographer from 1972 to 1974. During that time, Rock documented Bowie’s transformation from folkie to fictional rock icon Ziggy Stardust, unintentionally beginning an ongoing visual history of art rock, glam and punk in the process. Rock was in Seattle recently for the opening of Bowie by Mick Rock, a remarkable MoPop exhibit chronicling the first of Bowie’s many iconic image transformations.

There are 65 photos in the exhibit. Did you have a hand in selecting all of the photos?
Well, not each and every individual one. I’d send over a load of images to Jasen [Emmons, the exhibit’s curator] when we started to talk about this. He picked stuff from there, and then he came up with a half-dozen others that had never been exhibited anywhere. [Exhibits are] normally collaborative efforts with curators. I like to see someone come up with a different point of view on my photographs. I don’t get involved with designing the gallery shows; I let them hang them however they see them. I think, I brought the pictures to the table, it’s your fucking job to get on with the serious work of curating them. [laughs]

You came from a very interesting vantage point of being David Bowie’s peer. He was an established musician, but he wasn’t Ziggy Stardust.
No, he wasn’t. He was known a bit, and he’d had a minor hit with “Space Oddity” in ’69, but that had come and gone, and he couldn’t even get a record deal in England at the time, because The Man Who Sold the World was a big bomb. Now we look at it from a different perspective.

It must’ve been interesting being around him as he was kind of feeling his way around. Were you privy to the genesis of Ziggy Stardust, or was it something he just kept under wraps?
He would show me things, but David made all his own decisions. He did have a mate, Freddie Buratti, who designed the early Ziggy stuff. He worked with a couple of other designers who popped up occasionally. Like with the music and with his whole career, he would grab influences from all over the place.

Your early career was very DIY, almost punk rock. What was rock photojournalism like at that time?
It wasn’t that I was jostling [several other] photographers to grab the shot. No one else was that bothered when I first showed up. There weren’t many outlets for photographs either. It was primitive, media-wise, compared to today. Mostly they’d show up in music papers or on an album cover and not much else. So you couldn’t make a lot of money from it, but that wasn’t the idea. I mean, it helped that one didn’t have to get up before noon, that was sure.

You strike me as someone who’s always moving forward in terms of your output.
And yet, I’ve got the moniker of the Man who Shot the Seventies!

I’ve always thought of you less as the Man who Shot the Seventies, and more as the Man who Shot the Evolution of Art-Rock and Punk.
Oh, I like that much better. [laughs] Well, I followed what interested me. I suppose it was timing, it was my intuitive thing, which was probably born of the LSD and not eating and sleeping too much. The third eye was opened up. And of course, the people that I studied [at Cambridge University] were the English Romantics like Byron and Coleridge, the French symbolists, and the American Beats. So I saw the rock ’n’ rollers through that prism, especially the early work.

But for the most part, you seem to be at peace with being, as you once put it, the Guardian of David Bowie’s image and sort of an historian for this era in rock. And yet you still balance that with living in the present.
Well, when I had my heart bypass surgery in 1996, I was still working up until then. I had to recover, and my first thought was not about the past, not at all. It was about, I’ve got to get back to be relevant to the present. But if a band wants me to shoot them today, it’s really the early work that got them sparked on doing it. The ’70s pictures get more of a blast nowadays than any photos from the ’60s did. The Beatles and the Stones seem more back there. David Bowie doesn’t. That’s the interesting thing with David.

Bowie by Mick Rock is on view at the Museum of Pop Culture through Oct. 22. Tickets at mopop.org.