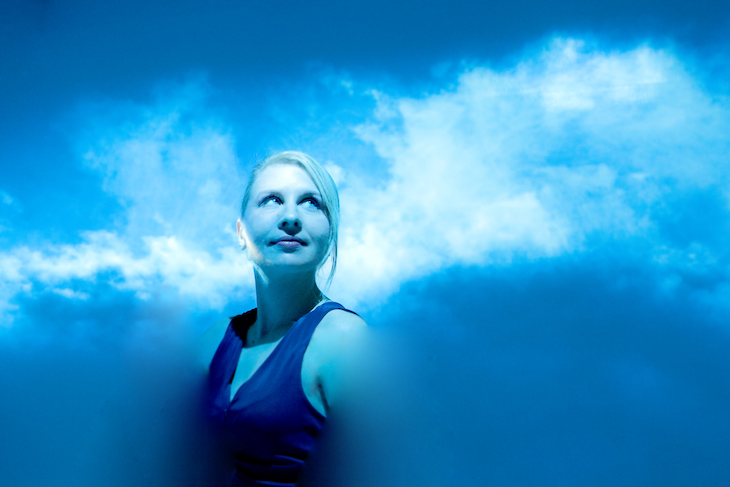 Maja Petrić in her installation, ‘A Panorama of The Skies’, 2015–2016. Photo courtesy of the artist

School, shelter, sleep, repeat. For nearly five years, such was Maja Petrić’s life. During the Croatian War of Independence in the early ’90s, when Petrić was a teenager, she witnessed a disintegrating Yugoslavia violently turn on itself and its citizens. Her hometown, Zagreb, wasn’t on the front line, but she still remembers the two-day attack on what is now the capital of Croatia. Rocket attacks deliberately targeted civilian locations.

Six years later, Petrić decided to study art in New York. America came as close to a safe place as she could imagine. Nothing ever happens there, she recalls thinking. She set foot on American soil in late August 2001. Less than two weeks later, New York resembled a battle zone, the violence it suffered sparking more violence and war.

“I lived on the 19th floor of a dormitory, where they started having drills at 3 a.m. It felt like the most normal thing,” Petrić says. “Until I realized: This is not normal. Only then did I start to become aware of how I had intellectualized, normalized the war.”

That year she staged a dramatic performance piece to process some of these experiences. While she danced in the style of a “traffic police man” in New York, rockets descended onto Zagreb in the video projection on the wall behind her. A collaborator in Zagreb did the same in front of 9/11 footage.

The point: “Connecting our worlds. It’s the same if somebody dies in Zagreb or in New York. It affects us all.”

Petrić, now a celebrated Seattle-based multimedia artist who’s shown at Henry Art Gallery and the Prado in Madrid, continues to create immersive experiences that get at the core of shared experience. Her newest installation at MadArt, We Are All Made of Light, hints at our interconnectedness. Petrić is installing during open studio days until the show opens Oct. 5, coinciding with the new South Lake Union light festival Borealis.

To reveal a glimpse of the gigantic installation, Petrić asks me to meet her in her studio, a glass-walled former office space in a Redmond strip mall, assigned to her as the city’s artist-in-residence. Arrive after sunset, she specifies in her email.

“You’ll come into the dark space and see stars twinkling from everywhere,” Petrić explains when I meet her. “You’ll be immersed in the galaxy.” A computer system tracks people as they move through the space, projecting their silhouettes back into space. Then, like windblown sand, these silhouettes are dispersed back into the constellation. “Everyone is part of a larger system,” she says.

Petrić explains that the artificial intelligence system will learn to understand and react to people’s movements and shapes. She seems hesitant to detail exactly how it’ll work, lest it sound like a gimmick. To her, artificial intelligence and machine learning are tools in the arsenal of creating immersive experiences. Since moving to Seattle for a Ph.D. in Digital Arts & Experimental Media in 2008, she’s worked with researchers to create the technical AI backbone of her work. For We Are All Made of Light, she worked with Microsoft principal researcher Mihai Jalobeanu.

In addition to her installation at MadArt, Petrić debuts her first open-air installation as part of the grand opening of Redmond’s Downtown Park on Sept. 15, projecting an “ever-changing sky” onto a mirror-clad, fog-infused pavilion at sunset. “It’ll feel like the whole pavilion is levitating, almost like a cloud,” she says.

Why the sky? What’s in it for her?

She seems almost indignantly surprised by the question, as if the answer’s so evident it needn’t be made explicit: “I’ve always wanted to create immersive spaces. The sky’s the most immersive thing in nature.”