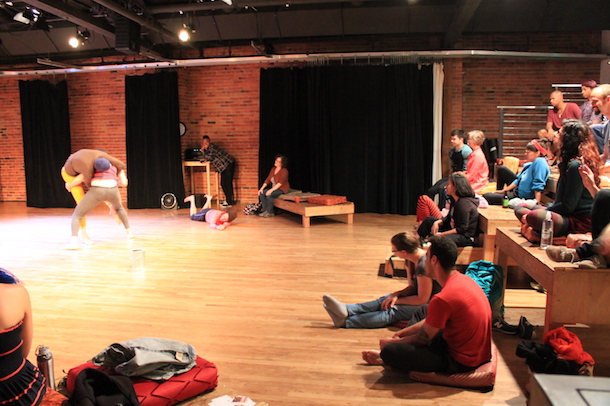 Whether it’s storytelling, a circus act or someone auctioning off a raw turkey, I’m almost always rewarded with a one-of-a-kind experience when I make it to Sh*t Gold.

Hosted on first and third Monday nights at Velocity Dance Center, the mixed-genre open-mic event (well, technically open floor) is an invitation to take artistic risks in a low-stakes environment. It’s free and anyone can participate. If you do, you get five minutes to do anything you want. As the event’s title suggests, sometimes it’s pure gold and sometimes it’s, well, you know. Either, way the audience cheers you on, which is the whole point: It’s a space where artists can feel free to fail.

I’ve been a semi-regular attendee of Sh*t Gold since it started just over three years ago, and have even hosted a couple times; volunteer MCs are part of this grassroots operation. Last time I hosted, a wonderful 10-person Bachata dance group showed up, bedecked in sequins, hips shaking in unison. Most of the time, though, it’s more raw—rappers trying out new lyrics, a dancer improvising to a favorite song. It’s not uncommon for an artist to involve the audience in performance experiments, such as viewing the work while lying on the floor or asking them to shout out suggestions. Once, the honey-voiced Campbell Thibo gathered the entire group into the women’s bathroom (for the acoustics, of course) and led everyone in song. There’s an intimacy in this sharing because unlike some more formal venues, this audience is here to support art at its earliest, most vulnerable stages.

“Sh*t Gold’s uncurated format and its play between the audience and the performer makes it an incubator for creative work and experimentation, a place to develop as a performer or just to share,” Frances Wolfe, a dancer and one of Sh*t Gold’s organizers, says over email. Most often you’ll find her working the bar, but I’ve seen her do a lindy hop routine that couldn’t have been sweeter. “I want to cultivate a community and space where that is celebrated and nurtured,” she says. Her co-facilitator, Ben Goosman, is a software engineer and dancer who has been developing his own brand of performance art over many Sh*t Golds. His measured, meditative works move through a series of precise shapes and gestures, often set to a recording of his own voice, often with a very subtle humor.

“I like Sh*t Gold because it’s not just a regular open mic; it’s not specific to a genre,” says regular ilvs strauss, “So, like, if I wanted to try stand-up comedy, it feels less pressure than doing it at an open mic comedy night because the expectation isn’t there that you have to make everyone laugh. The expectation, if you can call it that, is just that you show up and share.”

In my experience though, it often ends up being quite funny. “I’ve laughed so hard at performed YouTube tutorials, simulated Tinder dates, ‘annoying’ yelling,” Goosman says. One memorable performance was a delightful rendition of Burt and Ernie’s “Rubber Ducky” (complete with puppets!) by looping singer Michael Hamm, who I ended up collaborating with after getting to know him through the event. Strauss corroborates: “It’s a great way to meet other artists in the community. if you are looking to collaborate or just share ideas, you will find yourself in a roomful of great company.”

My own Sh*t Gold performances tend to be one-off reflections of my current life. One Monday I learned my grandmother had broken her leg, and we were afraid she might not make it through surgery. That evening I performed a work comprised almost entirely of falling. The often-last-minute nature of Sh*t Gold means you end up seeing art that is responding to the world in real time, whether personal or political. There have been works responding to police shootings of that week, elections or gentrification, which sometimes lead to group discussions and communal processing. If you go consistently, you end up seeing regular performers’ personal and artistic journeys too.

“I had the privilege of witnessing one performer gradually open up over many months until they eventually told their life story,” says Goosman, “They started with super hero storytelling with masks, progressed to divination, and changed it up with a parkour tutorial. They were so timid, but the last few times I saw them, they created a fake campfire with a bicycle light and transparent plastic sheets. Imagine the entire audience in a circle around this flame, listening to the performer telling an intimate story about their struggles with family and life thereafter.”

This weekend is Sh*t Gold: The Deep End, the long-form edition back by popular demand. On Sunday, July 16 from 6-10 p.m., artists will fill 20-minute slots, and audience members can come and go as they please. The regular season starts up again on Aug. 7.