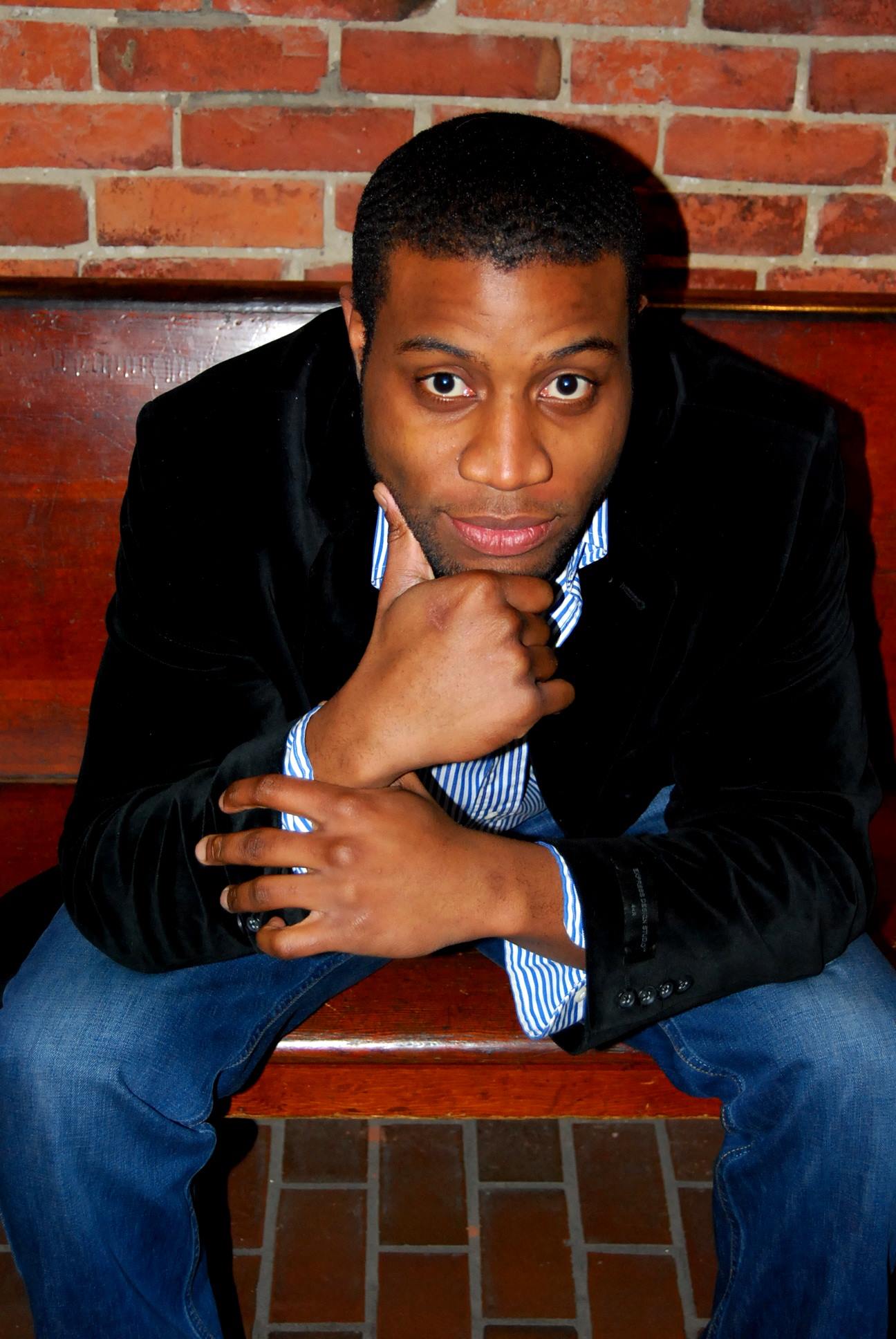 Standing out is difficult in a comedy scene like Seattle’s, where comics often outnumber audience members at a show. Among all the kool kids, hobbyists, outliers and try-hards is the rare comic who shows up, drops a solid chunk of killer new material on the audience and disappears until the next time, leaving everyone wondering, “Who was that?” Kortney Shane Williams is one such exceptional local.

Williams moved to Seattle from Florida in 2009 and quickly established himself as one of the most dependably funny, and elusive, working comics in town. He keeps his head down and stays in his lane, generating more new material in a few months than most comics do in a year. His is a skeptical everyman’s perspective with a sidewinding storyteller’s delivery. In the past few years he’s opened for some of the biggest names in comedy, including Hannibal Buress and Dave Chappelle.

Williams produces the monthly (Stand-Up Style) Comedy Show at Naked City Brewery in Greenwood, one of the best-attended indie showcases in town; the next installment is this Saturday. He also hosts the Kortney’s Last Show podcast with his brother Kyle, in which the siblings break down sports news and current events.

Next weekend, Williams will self-release his fourth album, To Whom It Doesn’t Concern, by performing two nights at the Rendezvous. I talked to him about his work ethic, opening for superstars and LeBron James.

You keep a low profile and you produce almost all of your own stuff—this album, the show at Naked City. What pushed you into that DIY mode and what have you learned by doing things your own way?
I was at Laughs when it was in Kirkland and Hannibal Buress came into town. (I used to do his show in New York at the Knitting Factory.) He said, “What’s the Sunday night show here?” I was like, “I don’t know, there aren’t too many shows on Sunday outside of the clubs.” He said, “Why don’t you have a show?” And then it dawned on me: Yeah, I guess I could start a show.

I definitely keep a low profile. I feel like a lot of people don’t know what I’m doing. I don’t go out that much, and I think that’s a function of me not starting my career in Seattle. By the time I got here I was featuring and within a year or so I was headlining the Underground.

Your life changes, you get older, you get married, and sometimes the young energy is too much, you know? Comics in the club are talking about, “Hey, can you watch this?” And I like to help, but sometimes you see it and you’re like, “Man, this is terrible!”

If I had to start comedy again I would not do it. It’s so difficult, but you don’t realize when you’re in the process that you’re actually not that good. You think, “I got a couple laughs, I’m getting better!” But now, 13 years later I look back and I was exactly like that.

If I knew how bad I was back then I would’ve quit.
Yeah, but you have no clue. When I started, my goal was to get invited back to do guest spots on the weekend. Now I’m that headliner who’s like, “Why’s that guy on the show? He’s terrible!” So I keep a low profile.

Lately you’ve been opening for some heavy-hitters—Dave Chappelle, Hannibal Buress. What’s it like to get the nod from dudes who are that far along in their careers?
It’s definitely affected my comedy hugely. The good and bad part of Seattle comedy is you can make a living doing comedy here and never be famous, never be on TV once. You can just be here and be funny; you don’t have to have any kind of buzz if you’re dependable, you show up and you have good relationships. You can work it.

The downside of Seattle is you become comfortable in what you’re doing. When you open up for bigger guys like Chappelle, you see an incredible level of talent. It gave me a target to shoot for.

Somebody on [Chapelle’s] scale and level, you see the audiences and the response he’s getting, the level of the art form, the way he can connect ideas. There’s something I saw past just being funny on stage or being super creative or quote-unquote “killing.” The way he was able to connect ideas, the way he was able to set things up. He’s maybe one of the greatest comedians ever.

That’s a huge validator, right? You’re in the green room, he gives you daps and says, “Good set.” That’s a big deal.
The first night I did it, I was talking with the road manager before my set. I said, “Oh, there’s a show tomorrow, do you want me to come back?”

He said, “Don’t worry about it, we have someone else.” In my mind I was like, “This guy’s lying, you don’t have somebody else because if you did they’d be here now.” Once I did my set and came offstage he was like, “Hey man, you wanna come back tomorrow?”

That was more validating than getting invited in the first place. In the back of your mind you can go out knowing, “My comedy worked on this level.” A situation doesn’t become so big that you think, “My comedy won’t work.” You always think: It will work—can I execute it? That’s the tough part of comedy, executing your ideas.

You’re a huge LeBron fan and a major sports dude and a Black man. The world is currently going apeshit about players kneeling. What are you feeling about that?
I listen to a lot of sports talk radio and the first reaction [I heard] was “If you wanna protest, this is not the place for it. Stay in the locker room. Why do you have to make a spectacle?”

When it first goes in you think, no one’s gonna change their opinions, you’re either Democrat or Republican. But there are people who actually will listen to the information—it may not be everybody, but you don’t need everybody to make a change. Any real change that happens when it comes to police brutality, the way people treat Black people, that’s the second stage. And that has a better chance of succeeding than it would’ve a couple years ago. I don’t know if it will be successful but it has a better chance. Sports are the way it ended up advancing on a large level. People like to look at sports as this meritocracy. To find out sports is not a meritocracy is like finding out Santa Claus doesn’t exist. It busts that bubble.

I don’t think of you as a super political guy. In a lot of your comedy you clown on Seattle liberalism—Whole Foods shoppers, bicyclists, etc.
The podcast is probably where I make all my political statements. Yesterday on the podcast my brother asked, “Do you think Jordan would’ve done this if he were in LeBron’s position now?”

LeBron is a special cat, man. I definitely disagree with a lot of things he’s done to me as a sports fan. As a human being, he’s one of the best in this country. The things he does for the cities of Akron and Cleveland—in Akron, if you keep a certain GPA in high school you automatically get a scholarship to the University of Akron. All because of LeBron James—period. That’s just him using his voice, right? He gives away bicycles to all the kids in Akron. He’s been doing it every year since he entered the NBA at 18 years old. When it comes to sports, it’s probably the only place we disagree.

In terms of him leaving Cleveland?
That wasn’t great for me. [Laughs]

He’s the perfect guy for that level of power, at least what he does for the kids. He cares about a section of people no one cares about. When he makes a statement about the president being a bum, especially when you work for an owner who held the Republican National Convention in the arena you play in, who donated to the president, and you’re still like, “I don’t care…” To see it leak over into sports and to see him have a stand on it, that can galvanize a lot of people who only see life through LeBron James. Which is a crazy way to see life, but there are a lot of people out there who only see life through sports.

You’re kinda like that, huh?
Yeah. Honestly, him leaving Cleveland was when I stopped seeing my life that way. At the time I was 26—that was seven years ago. I love sports but it’s really compartmentalized now. It used to put me in a bad mood if my team lost. I didn’t wanna talk. Now I’m just like, this is their job and I get enjoyment out of it, but I don’t live life through it like I did before. Because I realize they’re people and they’ll leave your team and play for another team. And if I had the option to move from Cleveland to Miami I’d do the same thing!