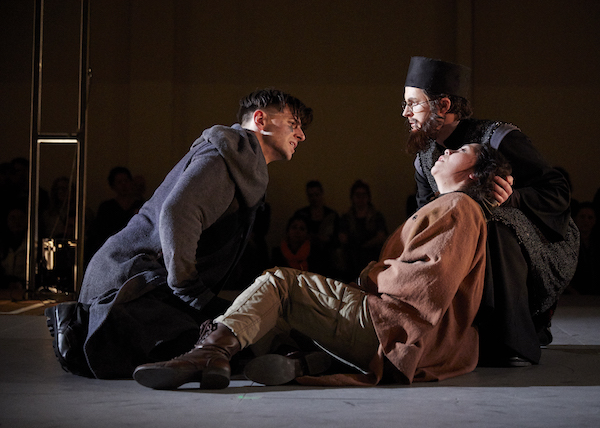 Thus the origins of Seattle Opera’s The Combat go back more than 900 years, and the fighting goes on to this day: the animosity, the lack of understanding, the idea that physical battle can somehow win over the ideological, psychological one. But as in this story, when openness and truth preside, one from each side can make the other realize they are the same living and loving human beings under the skin.

The Combat is a pastiche, a combination of Monteverdi cantatas “Tirsi e Clori,” and “Il Combattimento,” with a concluding commentary from François Couperin’s “Lecons de Tenebres” (“Lessons of Darkness”) from his “Lamentations of Jeremiah” about the fall of Jerusalem. The piece is arranged by Pacific MusicWorks artistic director Stephen Stubbs, with text translation and adaptation by Jonathan Dean. The imaginative stage direction of Dan Wallace Miller (plus the essential contribution of longtime fight director Geoffrey Alm) meets the consort of baroque instruments directed by Stubbs, and the result is an hour-long, exciting, gut-wrenching immersion in the forces of love and humanity versus intolerance, and the human toll taken in the battle between those opposing forces.

The Combat includes the two protagonists, Tancredi, sung by tenor Thomas Segen, and Clorinda, sung by soprano Tess Altiveros, as well as a narrator, Testo, sung by tenor Eric Neuville. From the start. Testo acts as a manipulator, an upholder of traditional thought according to his own prejudices. As time goes on he becomes a malevolent deus ex machina, but at first he just throws the two into each other’s arms. All three excellent singers are well-versed in baroque performance style, easily able to traverse the demanding ornamentation, and all three are expressive actors.

This is the second mini-opera presented this season by Seattle Opera (last fall we saw As One, the journey of a transgender woman) presented in venues other than McCaw Hall. This one travels the rehearsal studios in the bowels of the Opera offices off Terry Ave. After entering through workmanlike storage areas, each audience member is given a coaster with either a crescent or a cross on it, and moves to the sound of a somber tolling bell to stand (there are a few seats) in the first rehearsal room around a low raised square.

In the short “Tirsi e Clori,” the protagonists fall in love without revealing their identities. Then, moving into the next studio, “Il Combattimento” has Testo dividing the couple, dressing them in battle garb, providing one with a long sword and the other with a lethal scimitar and encouraging them to go at it. And they do. This studio had a low, raised platform about 50 feet long and some 20 feet wide, the audience of Crusaders standing to one side, the Muslims to the other. Tancredi and Clorinda have not recognized one another and, true to their upbringings, each regards the other as an enemy to be slaughtered.

The battle scene is lengthy and furious. Luckily, Testo does most of the singing here as the combatants wouldn’t have enough breath. From one end of the platform to the other, the two hack at each other, swinging and slashing; it’s an amazing fight to watch. You can hear them breathing heavily. They wound each other, they rest only to come back even more fiercely; Tancredi rebels, trying to pull back, when Testo steps in to force the coup de grace.

Dying, Clorinda asks for baptism and Tancredi removes her helmet, recognizing his love. Agonized, devastated, he thrusts Testo out of the space. Meanwhile two sopranos (Linda Tsatsanis and Danielle Simpson) begin the third of the Couperin “Lecons de Tenebraes” which slowly, gently, serenely brings remorse, sorrow and eventually hope. They pull a river of white cloth along the platform as they sing, and encourage the audience to put their coasters along its sides, while Tancredi takes the hands of audience members in silence, looking into their eyes. The bell tolls again and the audience files out in silence.

Tasso’s poem is available online and it’s worth reading it before going to the performance. Monteverdi’s music is true to the poem’s story and, as exquisitely performed by Stubb’s forces, you can hear in it the galloping horses, the ebb and flow of the battle, the pain, the death. The effect, profound, lingered long after the music ended. There are three more performances next weekend. Tickets are few because the space is small. Don’t miss it. Hope, request, that it will be brought back.