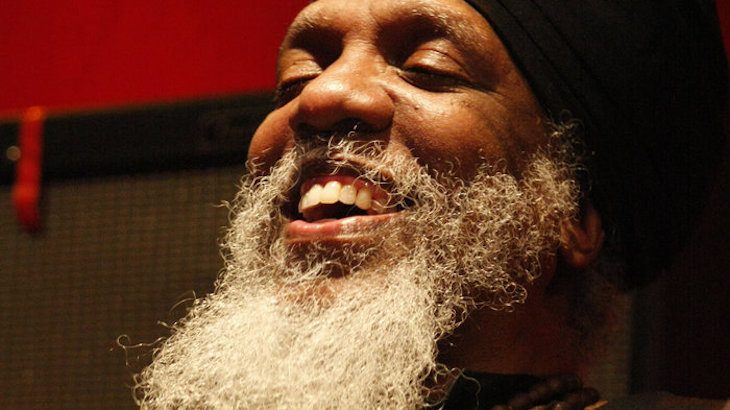 Spend 60-some years in the relentless pursuit of groove and you may end up as effervescent as Dr. Lonnie Smith. At a regal, jubilant 75, the New York State-born, Florida-dwelling organist, composer and singer is an ambassador of groove, releasing records —including this year’s All in My Mind, his 27th on Blue Note and 50-somethingth overall—and traveling the world with musicians less than half his age.

Perhaps because he aligned himself early on with the earthier, more sensual, more dance-oriented side of jazz, he’s never received the canonical reverence of his headier peers; perhaps this also is why he carries himself with a trickster’s impish playfulness rather than the grave self-seriousness of jazz’s other elder statesmen. Among all those albums and songs are the foundational moments of soul jazz and jazz funk, moments sampled by A Tribe Called Quest, Wu-Tang, Beastie Boys, Madlib and many more, crate-digging gold that became the foundation of hip-hop. Whether you know it or not, his music suffuses the pop landscape. That he’s still playing with the verve and gusto of his younger self speaks to the preservative power of music. He plays Tuesday and Wednesday at Jazz Alley.

I understand you came upon the Hammond organ when you were still really young.
You bet. It was just waiting for me evidently. Buffalo, New York. It was like the angels came from heaven. It was already here. Mr. Art Kubera, he had a music store, and I’d go sit in the music store every day til closing time. He says, can I ask you a question, son? I said, yes, sir. He said, I noticed you come here every day and just sit. I said, sir, if I had an instrument, I could learn how to play it. I could make a living. It stuck w him. I kept going but I wasn’t expecting anything. I went in one day, he closed the store up—it was a little-bitty store, he didn’t sell organs—and he closed the door and took me to his house and opened the door… Now this is true. If you look in the Bible and you see the rays from the sun shining through the clouds, those beautiful rays, it was like that just opened up. From the organ. You could hear the voices and everything. [Sings in a holy, hallowed voice: Ahhhhhh!] Like that. He said if you get this out of here it’s yours. It cost thousands of dollars. I didn’t have no money, I was broke. But he said if you can get it out it’s yours. He gave me the organ and that was it.

What is it about the Hammond B3?
Wow. The sound expresses everything to me. It has all the elements of the earth, of the world, all the sounds of the world. You have the storm, the ocean, waves, rainbows everything is there. The thunder. The sunshine. It’s wonderful. And when I play, when I touch that organ, it feels like the passion that comes through my body, it’s like electricity. Fire. Everything just comes alive. Nothing like it. It goes through my soul. I’m floating on the atmosphere of the world. I can go anyplace I want to at that moment. Can you imagine that? You can travel anyplace you want to. Wow. You can’t beat that.

The organ, as soon as we met, I didn’t choose to play it, it chose me. That organ hit me. You’d hear that in the churches. Wild Bill Davis, Milt Bucker, Count Basie, Jimmy Smith. They all played organ. That did it.

You had a musical family, too.
My mother, her sisters and mother and cousins, we all sang music. They had a quartet, a mother and daughter quartet. So they sang spiritual music. We were in the house one time and we’d hear music with no lyrics or whatever, on the radio, and we’d start singing and scatting an making up words. It was natural, my whole life. It was beautiful. You can’t beat that. It was already there, I had nothing to with it. We had lots of fun. Can you imagine that? Wow, whew, that was beautiful. You can’t beat that kind of life.

When I’d be singing onstage, my mother looked at me and was so into it you could see the love on her. It was so beautiful. I never seen anybody’s eyes like that when we play. She was so proud.

Early on you hooked up with guys who went on to have great careers—Melvin Sparks, Grover Washington, George Benson. In bands together and individually, you all got into music that eventually was called “soul jazz.” Which we know looking back at that time. But what about when you were living it? Did you know you were veering away from the more mainstream forms of jazz?
We grew up together. It was strange. When I first went out of Buffalo I was playing with a group that played behind Dionne Warwick, Gladys Knight and the Pips, a lot of Motown groups. I took that with me.

What makes it even better, playing during that time and now, those were the guys that were giants, back in the day. Now we’re those guys. You see young people coming up and sampling your music and you don’t believe it because it’s wonderful seeing that. Can you imagine that? Sampling your music, turning it their way? It’s beautiful. It keeps breathing. They’re keeping it going.

I’ve seen you play before, and unlike a lot of elder statesmen of jazz, you’re having fun with the music. A lot of older guys are very serious, stoic, but you’re up there smiling and radiant. I even remember seeing you in San Francisco and you played the organ with your butt!
I used to have so much fun. It was so much fun. I like people to feel the music. Not just to play it, I try to take them with me on that journey where I go. I take the person with me on my trip, I want him to feel every movement that I take. So they can feel that. Instead of just notes, it’s from the heart. I tell students the same thing—play life. Not just rudiments and stuff you’ve practiced. You have to play life.

If we’re walking and I say, I’m walking this way, and you say, wait a minute, go right here, it’s quicker, I follow you and you show me something, and that’s beautiful. That’s fun because you never know what’s gonna happen. It’s great getting a surprise out of that. So the people are with me. They say, what was that? Oh wow. And haha, they laugh, and I laugh at myself because at that moment because I’m hearing two or three different things at once, so which will I take at that moment? That’s what’s beautiful. Taking that chance. That’s why you see my smiling and laughing, because I’m tricking myself out. I’m enjoying this rush. As the guys in the band, they’ll tell you, it’s in the moment. That’s why you see me smiling. You better be listening and be on your toes.

I love outsider music. Avant-garde. But there’s groove in everything we play. Because the feeling is inside me.

Your new album is called All in My Mind, and it has your song of the same name on it, a new version of the song you originally recorded in the 1970s. The original is bouncy, swinging, funny—like you’re noticing how screwed up the world is and laughing. The new version is slow, sad, even mournful. Was that because the world is a rougher place now than then?
That’s the kind of guy I am. I will change it up on you in a minute. I don’t wanna play it the same way all the time. Some people can but I can’t. During those earlier days on Blue Note, we used to be in the studio three to six hours. We’d pump out an album or two within that time. Today they don’t do that. A lot of them, they’re in there for days. I say sometimes that they make a record like Frankenstein. They don’t want your mistakes in there. And I think that’s what happened then. Leave it in there. You trying to doctor it up? You’re flat there, and so what? They doctor it up to make it perfect. You’re not perfect! That’s the thing I don’t like. Music is supposed to be played and felt but if I Frankenstein it up, it won’t be like that. I want you to breathe. When you hit that note, you gonna make it? You walk the tightrope, you know what I’m saying? What happens when you slip and fall? Do you get up and keep going or do you talk about it?

That’s what it’s about. It’s not how great you are, because everyone is important. In the rock genre, classical genre, in the church, they can all play. Everyone has a story to tell. Play life and you got it made.