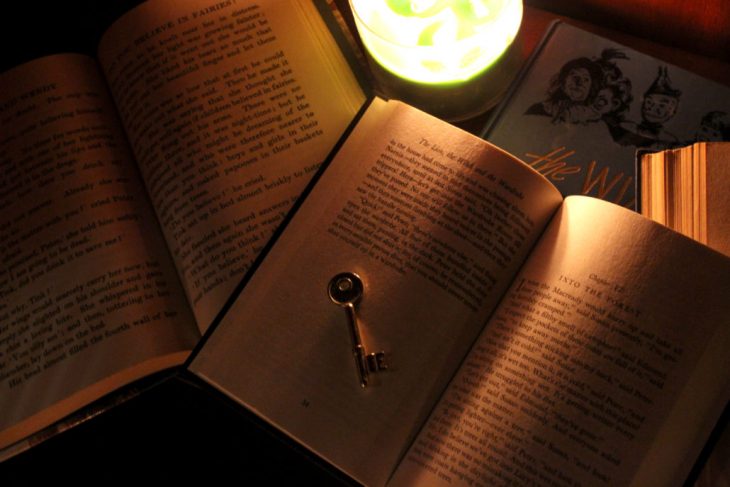 With an immensely satisfying thunk and a whoosh, a secret panel in the wall slides open, to the very audible delight of the five 30-somethings who’ve spent the last quarter-hour searching this library for an exit. I badly want to tell you how we released this hidden portal, and even more so reveal what lay beyond it, but the charm of this tiny, secret storybook world in the heart of Fremont lies in its unexpected surprises, and I’m not a jerk. Suffice to say, we grown adults spent some 70 minutes making our way through a fairy tale by solving all sorts of puzzles. Ridiculous, maybe; fun, definitely.

For nearly three years, escape room company Locurio has been running their show The Vanishing Act in a nondescript Fremont complex; in February this new show, The Storykeeper, took up residence nearby. Locurio founders Summer Herrick and Natalie Parisi (a third partner, Philip Dasler, now lives abroad) met through the Seattle puzzling community. They blended Parisi’s graphic and game design background with Herrick’s theatre and film experience to create their own take on puzzle-driven escape rooms. In some ways, Storykeeper is neither fish nor fowl—not a purely intellectual puzzle experience and not a passive narrative theatrical experience.

“We really like the emphasis on immersion, and what better way to do that than with a story that you can live inside, as opposed to being put into a bare-bones room with, like, a Sudoku taped to the wall,” Herrick says.

The lump-sum price tag feels hefty ($240 for six people) but at $40 a head Storykeeper is no steeper than many theatre tickets. Seattle doesn’t have much immersive theatre, and what it’s had has been mostly what I like to call “ambulatory theatre,” which mistakes making people walk around for immersion. There are small acting roles in Storykeeper, but nothing that tips into awkwardness, even though most staffers aren’t exactly actors. There’s a big suspension of disbelief required to settle into this Storykeeper experience, but it helps that the creators’ attention to detail is off the charts—noticing details is the whole idea.

Herrick and Parisi are both longtime puzzle and game lovers, of which escape room games are just one segment. “I’ve always been drawn to experiences or media that bring mystery and adventure into my life,” Parisi says. Herrick adds, “I love figuring out the connections, but I also love feeling completely immersed in a story. It’s like being in a movie, but my own movie.”

After getting The Vanishing Act, which takes place in a magician’s dressing room, on its feet, the Locurio team looked to expand and build on their experience. “We learned that we could make cool stuff,” Parisi laughs. “[Vanishing Act] was the coolest thing we could think of then, this is the coolest thing we could think of now, and it just ballooned into this massive monster of a project. We designed something bigger than just two of us could create.”

Storykeeper took 14 months to build from conception to opening day, and they did create a lot of it themselves. “If this escape room thing falls through, now we can go into the cabinetry business,” Parisi jokes. With help from handy staff members, friends (called upon for things like custom soundtrack work and concept art) and Ben Andrews, who made the complicated technical mechanisms within the puzzles themselves—they built this world.

Herrick and Parisi now manage a 10-person staff. Two people are on hand for every game and they watch closely to see how you’re doing, and to nudge you along should you need assistance. For Storykeeper, hints come via a digital storybook with custom illustrations; the book reveals new pages with new information as teams need it. For The Vanishing Act, text messages from the magician’s assistant in peril come in via a special cell phone. The room is designed to keep you hooked and make sure you have a good time—so while the object may be to escape from it, it’s just as exciting to spend an hour escaping into it.