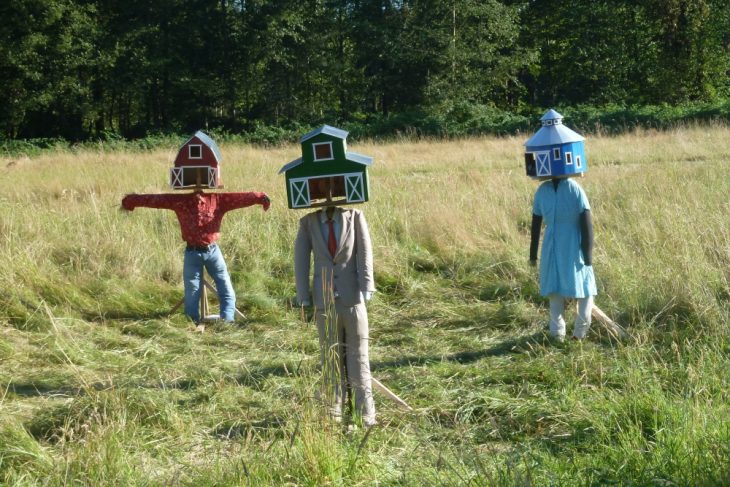 Smoke Farm is one of those rare places that makes one forget everything about the world spinning outside its perimeter. This past weekend, the 365-acre Eden outside Arlington, Wash., hosted the Lo-fi Arts Festival, an annual art and performance festival put on by Low-fi Arts and Rubicon, the farm’s owners. The festival showcased 55 different projects—site-specific art, theater, painting, sculpture, music, poetry and dance—and drew the largest crowd since the festival’s inception, around 500 people including artists, coordinators and volunteers. The family-friendly overnight event was more an electricity-free fairy tale summer camp than the earsplitting, chaotic outdoor ordeals that the word “festival” has come to embody.

I had the pleasure of getting a guided tour of the farm’s labyrinthine grass corridors by Lo-fi’s head curator, artist Anne Blackburn.

Generally, artists spend a part of the week prior to Lo-fi installing their stuff at the farm, with some making visits months in advance. The most site-specific work is startlingly aware of its environment, almost a part of the farm’s natural habitat. For example, woodworker Steve Leroux’s “Viam Saxa”— an intricate maze of miniature bridges and treehouses strung with twine between low-lying branches through a family of trees, nearly 20 feet long and ten feet wide. Leroux’s piece was one of a handful of installations that was illuminated at night. Each pagoda-like structure housed a tea candle that shone through the windows and cracks of the structure after dusk. 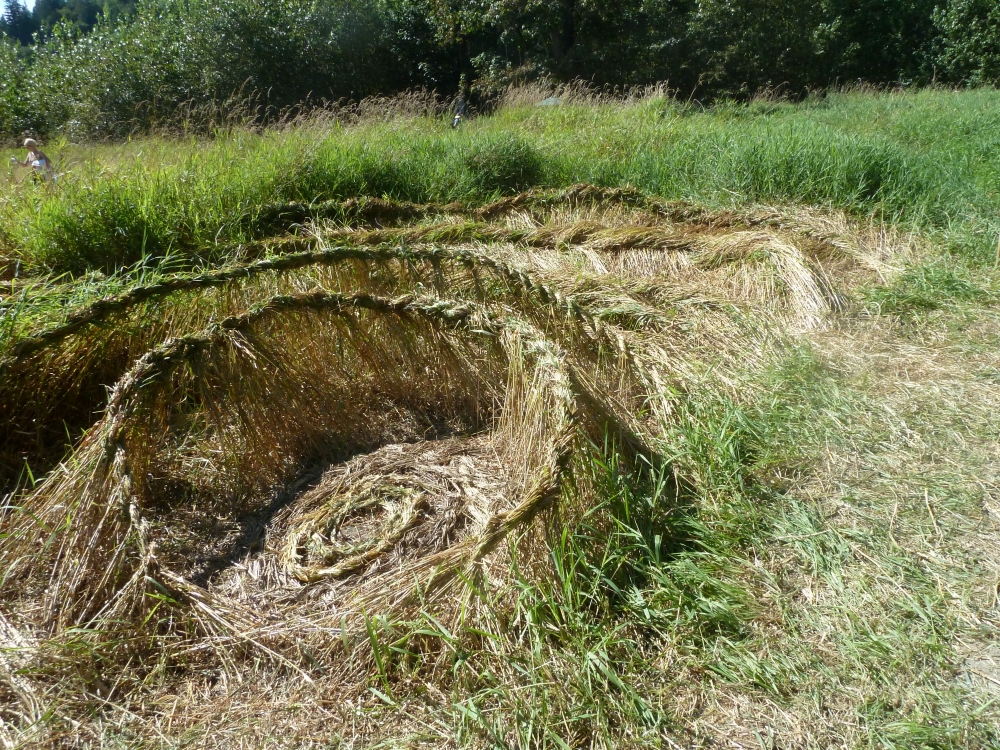 Not far from Leroux’s work was an open field of tawny wild grass, a large patch of which had been woven into thick, sturdy braids in crop circle-like designs aptly named “Woven Grass Village.” The creators of the piece, Sara Kavage and Adria Garcia, wove a similar “village” at last year’s festival, the remnants of which could still be spotted in thick, dried-out braids on the edges of the foot paths through the installation—a subtle reminder that some of the art at Lo-fi literally grows into its environment.

Also in this field were a number of other pieces; most notable was Laura Elizabeth Becker fully dressed in a pink silk colonial gown and bonnet spinning 78s for viewers on a giant red-velvet swing hung from a massive deciduous tree. The result of Becker’s “The Happy Accidents of the Swing,” like many of the pieces at Lo-fi, was a shared sense of joy among those taking turns on the swing. It was art that could be enjoyed and experienced without painstaking consideration.

After the field I rushed through a few installations and performances to make time to dip in the river before the start of the festival’s hilarious song and dance troupe, the Stillaguamish Floodplain Cabaret. Slow moving and just cold enough to cool you down after hiking endless trails for the sake of art, the river was filled with inner-tubers and children content with spending the rest of daylight partially submerged. Also submerged in the river were the legs of a ten-foot-high wooden structure topped by an upright piano. This provided the music for the Floodplain Cabaret’s seriously silly (and slightly R-rated) songs, like the lady-only hymnal singalong “I’m Going to Tie You Up and Do Stuff to Your Wiener” and the boisterous boy-group number “Big Washington Wood.” Both had my host Anne and me weeping with laughter. 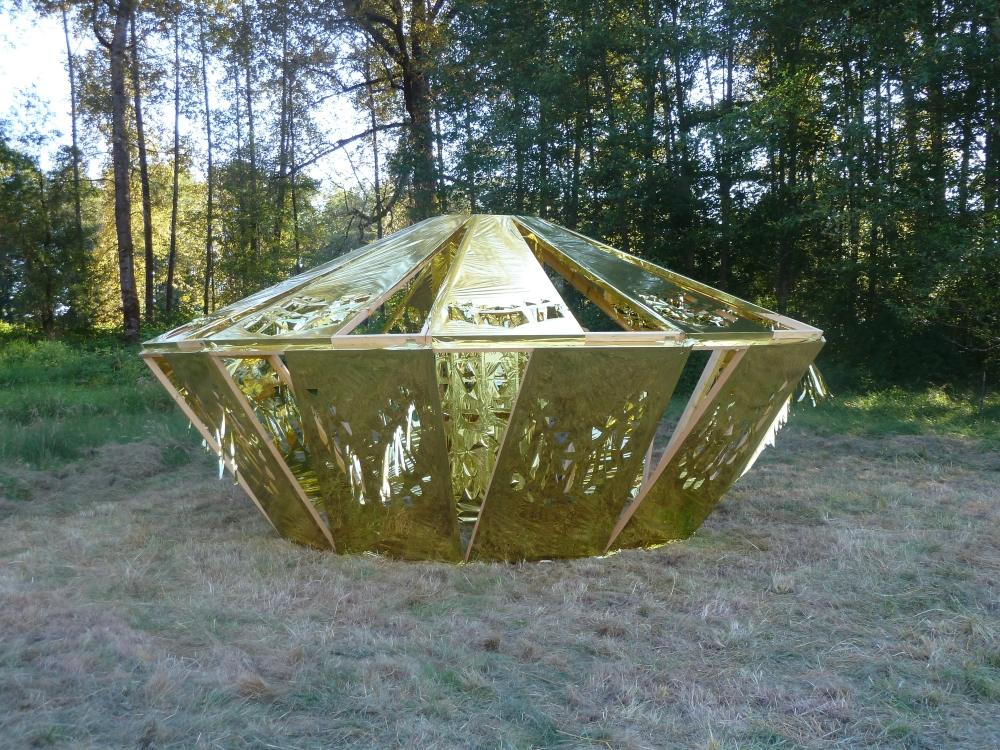 A walk away from the river was the Loafing Shed, the central building for visitors to meet up, eat, get water, etc. Along the way in the South Pasture was the “Naptime Extravaganza” which featured a 10×10 constellation quilt by Margot Bird, lullabies sung by one of the roving musical troupes, Lonely Coast, and bedtime stories read aloud to nappers by John Boylan. The South Pasture—one of the largest open spaces on the farm—also housed Maija Fiebig’s “The Golden Jewel,” a golden, wood-and-cellophane structure in the shape of a jewel the size of a carnival ride that reflected near-blinding sunlight across the grassy expanse and was illuminated after nightfall. 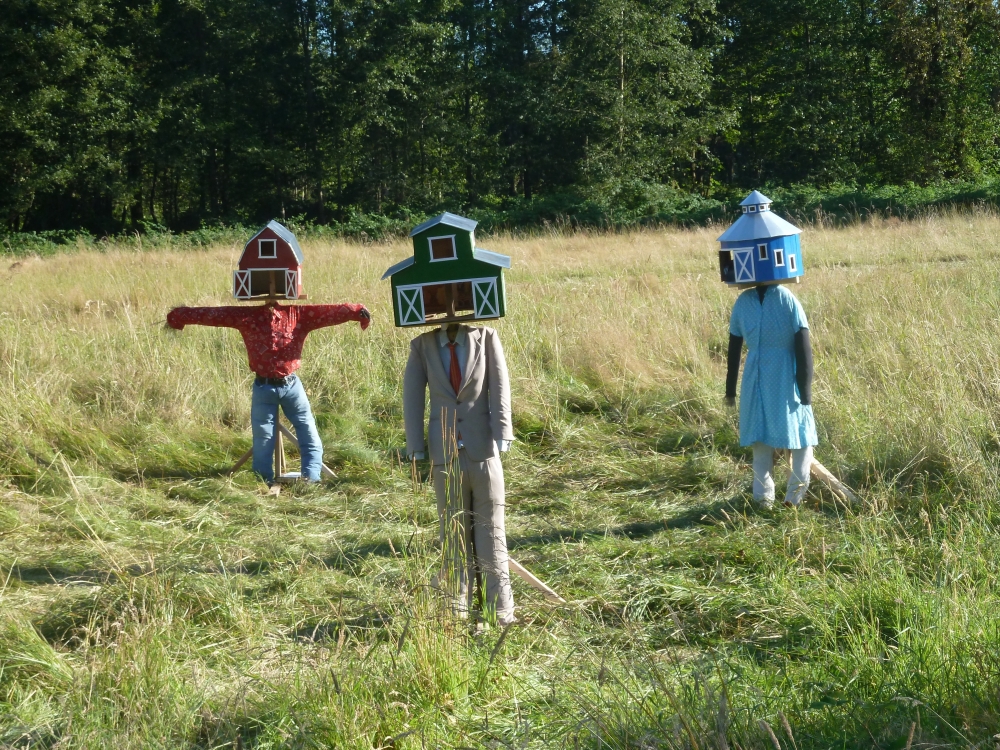 Beyond the pasture, Cabbage Tree Mob’s “The Barn Identity” offered scarecrows with doll-house-like heads with holes in the bottom so that passer-byers could insert themselves inside.

Back at the Loafing Shed, performers and visitors settled in as grills were lit for the evening’s barbeque and more raucous after-dark festivities. People discussed their divergent experiences, comfortable in understanding it was impossible to catch every performance and see every installation. Between the quiet of the trails between exhibits, and the healthy, relaxed looks on people’s faces as they bundled up into fleece coats and jeans for the night, the magic of the place was gleefully overwhelming.