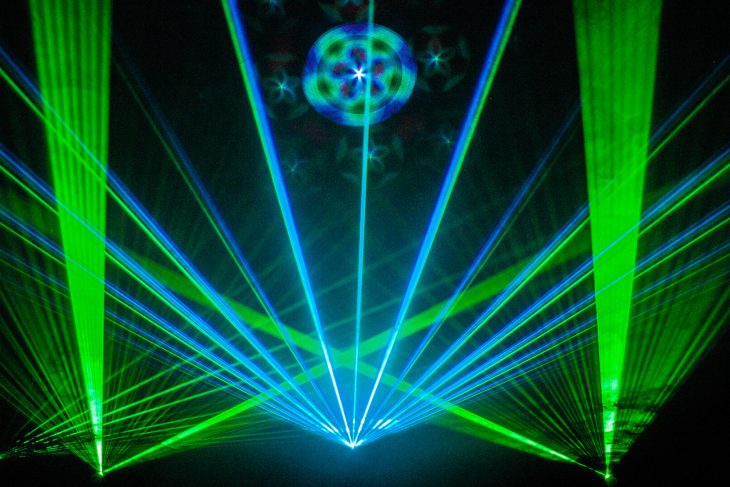 I’m inside the Laser Dome at the Pacific Science Center for my first laser show since high school, lying on the carpeted incline in the center of the room, head resting on a rolled-up scarf, gazing up at a scrim of kaleidoscopic shapes and airily undulating arabesques. Light beams search through an artificial fog. At the bottom of the slope Erik Blood performs on a low, dimly lit stage, but all eyes are fixed on the phantasmic display overhead. My thoughts recede to take it all in, sound and light harmonizing in momentary eddies of synchronicity.

I realize: I’m having a vital contemporary musical experience in the Laser Dome.

The world’s largest and longest-operating domed theatre is now an alternative live music venue, with monthly shows featuring mostly local bands. Once the domain of stoned teens zoning out to Pink Floyd, the Dome has become a place of latter-day experimentation.

Chris Harris’s job description is “creative laser programming coordinator,” but he also goes by “laserist” or “laser artist,” or by his “laser name,” Ziggy. He’s a tall man with sincere eyes and a cleanly shaved head, originally from Oklahoma City with a background in audio engineering. Harris organizes the bulk of the Dome’s musical programming, which has swerved away from the standard ’60s psych-rock toward artists like Beyoncé, Kendrick Lamar and Sia.

Harris also books the live bands. “Literally every band I reach out to, the first response every time is, ‘Are you kidding? Is this a joke?’” Among the bands to play the Dome so far are Great Grandpa, SassyBlack, Taylar Elizza Beth, Hair and Space Museum, DoNormaal, Wimps, Big Bite and Drab Majesty.

In December 2016 the Dome got a new laser system to replace the old one, a 40-year-old array of gas-based lasers that ran on massive amounts of electricity and took hundreds of gallons of water to cool. With the new diode-based system in place, Harris and his team have entered uncharted territory, tinkering with new technology and new genres. Harris and his fellow laser artists (laser names Scotty, JoJo, Obi-1 and Lazar Wolf) spend most of their time performing the shows or developing future ones and trying out new effects. They’ve got the Science Center’s blessing and a license for artistic freedom with a mission to reach new audiences.

“If we wanted to book a band that had 48 followers on Facebook just because we thought they were great and deserved a chance to play here, [management] would support us,” Harris says. “Every time we try something new it leads to another idea for something different we could do. It’s this exponential creative tornado that happens where ideas sort of stack on each other.”

Harris has a wish list of ideas for more inventive programming: a variety show, dance, poetry. They’ve enlisted the help of their Seattle Center community, partnering with the Vera Project and KEXP. Harris hopes to add another live show each month.

Watching a laser show as a jaded adult—not a stoned teen—I was nevertheless prepared to be dazzled by novelty and nostalgia, but a certain amount of skepticism swiftly set in. Do I still have the capacity to be awed by what is essentially a giant screensaver on a curved ceiling?

As I watched, the lasers insinuated themselves into my brain, subtly at first. It’s a novel experience to lie on a floor in a roomful of people (there’s ample theatre seating but the floor offers the premium vantage point) immersed in abstract, non-narrative audiovisuals. Erik Blood’s music was perfectly suited to the Dome’s range of effects—feathery lattices of light, bright hard spinning glyphs and flowing rivers of color.

My mind wandered, waded back into the performance, meandered off again. I had a couple of momentary mini-epiphanies of the kind you only get when you have occasion to be still, relax, watch and listen. When the lights came on, I sat up gradually as if emerging from meditation. I’d experienced an indefinable catharsis. The lasers had blasted away my skepticism; I was sold.

“The biggest problem we have with the Laser Dome is people either don’t know it’s here at all or they haven’t been in 15 years and they’ve forgotten,” Harris says. “When audiences see the show we don’t have to sell it beyond that.”